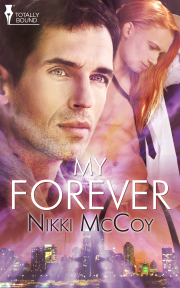 Two men moulded by the fierceness and pain of their lives form a bond that ignites their passion, but will their love be strong enough to endure the violence of their pasts?

Lucas Matthews has loyally served his race for over two centuries, forced to kill the criminals of his own kind. When his Commander decided to take their laws into his own hands and give Lucas the choice to join his select group of rebels or die, Lucas ran. He refused to bow down to the corruption of his commander and kill humans for profit. After four years of hiding and six years of well-earned peace, his life was once more turned upside down when a small wisp of a man captured his heart.

Kyle Jennings' desperate need to find love and acceptance landed him under the cruel domination of a sadistic boyfriend for five years. When Lucas appeared to rescue him one day, like a fierce, protective hero, he found himself succumbing to the gentle yet firm hand of the Dom. Through guidance and care, he finally found the courage to regain his independence and willingly surrender his control to Lucas.

Together, they create a soul-bond forged in love, but they must fight to keep it. With the Commander once again on Lucas' trail, they each find themselves with a decision to make. Will Lucas have to forfeit his freedom for the sake of his love's happiness, or will Kyle choose to sacrifice his life for his Dom?

Lucas pulled into the back parking lot of his business and stepped out into the crisp, pre-dawn air. The sky was clear, though the stars remained hidden behind the glow of city lights. Faint puffs left his mouth on each exhale, but it would warm up later. All in all, it looked to be a good day to have his wine-tasting event.

Unlocking the back door, he entered his liquor store, began flipping light switches and adjusted the temperature on the central ventilation system. When he’d opened the shop five years ago, he’d never imagined it would rake in the kinds of profits he made every month. The endeavour was financially unnecessary—he had enough money saved to fund a sizable army—but what had started out as a relief from the boredom of retirement had quickly turned into a wine connoisseur hot spot.

He was proud of his accomplishment. For the first time in his life, he was doing something that didn’t revolve around death, although it wasn’t always easy. The wine-tasting events he threw every quarter-year were starting to wear on him. As if being here at five o’clock in the morning wasn’t bad enough, the paperwork was downright exhausting.

A draught of cold air blew over him and he looked back to see his favourite employee coming in through the rear entrance. “Hey, kid. You ready for today?”

Kyle gave him a wan smile from a face a little too pale for the weather outside. Concerned, Lucas reached out to grab his shoulder as he walked past but Kyle lowered his head and shied away before he could make contact. The behaviour wasn’t atypical. Lucas suspected that his aversion to touch was due to some type of past trauma, but during the six months that Kyle had been working for him it had only seemed to worsen.

“You’re not looking too hot. Are you coming down with something?”

Kyle adapted a wider, obviously fake smile. “No. I’m fine. Is the shipment here yet?”

Lucas took in the unusually dark bags under the young man’s eyes before answering, “Should be here in twenty. The last one is coming about an hour before we open up but it’s mostly liquor. We’ll have plenty of time to get everything set up before then.”

“Cool. I’ll get started on inventory then. Save you some brain power for crunching the numbers at the end of the day.”

Kyle continued walking, fishing out his extra set of keys for the office from his jeans pocket. As always, Lucas took a moment to admire the sight of the small man’s compact ass through his loose denim. As much as he would like to say he’d hired Kyle based on his credentials, it would be a lie. Kyle had no past employment history. Not even a high-school diploma or GED. But what he lacked in those areas, he more than made up for in customer courtesy and a willingness to work.

Of course, Lucas hadn’t discovered those qualities until after he’d taken the man on. He was more than a little ashamed to admit that it had been Kyle’s looks and attitude that had initially won him over.

Long, reddish blond hair framed intense green eyes and soft, full lips made for kissing. Kyle was fine-boned, almost delicate, but every once in a while Lucas caught glimpses of lithe muscles stretching and bunching on his arms and beneath his occasional tight T-shirt. The top of Kyle’s head maybe came to Lucas’ collarbone. And his submissive demeanour...

Nikki McCoy brings together a man trying to escape his past and a man who suffered years of abuse at the hands of his lover. The two men work together to create a new life for themselves. The sexual...

a very interesting paranormal story...The many twists and turns the plot takes will keep the reader entertained...

Share what you thought about My Forever and earn reward points.