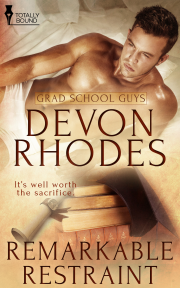 The exchange and development of their relationship is gradual, but not so slow that it makes the book drag, which I appreciated. While I wish there were more written when they were physically together,...

Share what you thought about Remarkable Restraint and earn reward points.

Remarkable Restraint came to life when I had an idea for a scene where one friend literally ties his best mate down in order to get some answers from him…and sparks ignite.

Three of my favorite desserts:

When I'm in a nostalgic mood, I love pumpkin pie with real whipped cream. Mom always made it from scratch every holiday, and I've kept up the tradition. She still makes sure to bake one when I visit, even if it's summertime.

Other books in the Grad School Guys seriesView Series Page