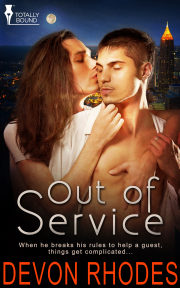 Being the problem-solver of the hotel is Esteban's role, but when he breaks his rules to help a guest, things get complicated. Especially for his heart…

Esteban Parks is used to being the go-to-guy at the Melia. As the front desk manager, he's in a position to see everything that goes on—front and back of the house. Nothing fazes him, until he's confronted with an appealing guest and instinctively goes into rescue mode.

Jayden Yates has travelled to Atlanta with one goal in mind—to be himself for just a little while. His family and community already make his life miserable and he hasn't even come out yet. So he impulsively spends part of his savings to come to GayRomLit.

When he finds out that a simple mistake might derail his whole adventure before it even begins, he literally falls at the feet of the most handsome man he's ever seen. Esteban offers him more than help—there's an instant spark between them.

But can two men from such different backgrounds and stages of life find any common ground? Or will it be just a holiday romance for the memory books?

Jayden couldn’t believe he was actually there at the Meliá Hotel. He shifted his shoulder bag, which seemed to be growing heavier by the minute, yet again as he waited in line in the lobby for check-in. He finally shrugged it off and rested it on the top of his rolling bag.

Excitement warred with nervousness in his gut, leaving him wishing he’d taken the time to grab a bite from one of the dozens of fast-food restaurants he’d passed before he’d eventually made his way through Atlanta’s airport to the transportation area to catch the shuttle.

He hadn’t done much travelling before… Well, to be honest, he hadn’t ever flown before. It had been a huge step for him to leave his podunk little town to come all the way to the East Coast to attend a conference where he didn’t know a soul. Registering had been an impulse, and once that had been done he’d faced the realisation that he was going to then have to buy a plane ticket, reserve a hotel room and actually get there. The planning hadn’t been as bad as he’d thought—it had been kind of fun to imagine being at the event—but that had been last winter and it had seemed so far off at the time.

Soon the day had come when he’d had to pack then drive himself to Denver for his flight. It had taken him way longer than he’d thought to get through security, so he hadn’t had time to eat in the terminal before his flight—it had already been boarding when he’d reached the gate.

He’d vaguely expected that there would be a meal served on the flight like they always showed in the movies. Instead, they’d been offered some undersized and insanely high-priced snack options for purchase. Hell, he could’ve picked up ten at the grocery store for what one would have cost him. In the end, he’d ignored his growling stomach and passed, savouring the free pretzels and going for juice instead of pop.

Now things were really getting dire, and he was feeling a bit lightheaded from lack of blood sugar. He wished the line would hurry up and move before his damn stomach decided to go on a rampage and eat all its neighbouring organs. He eyed the long counter with several computer stations…and one person working.

Jayden tried to be patient and looked at the people around him, seeing if he could pick out any other GayRomLit attendees. He didn’t know anyone who would be there other than a few people he had ‘online friendships’ with. A few small clusters of people stood here and there, but he had no way of knowing if they would be with the retreat or were just random travellers.

There was a sudden, piercing squeal as a petite blonde woman appeared out of nowhere to his left and grabbed the long-haired woman in front of him in a crushing hug.

“You’re finally here!” She grinned at her friend then met Jayden’s eyes briefly before scanning the rest of the line. “Have you been waiting long? There’s usually, like, four people working the desk.”

“Yeah, we’ve been here forever. My luck, they have a staff meeting or something right when I get here.” She laughed, sounding happy in spite of her words. “At least I’m standing up. My flight was lo-ong.”

You will fall in love with these guys from the first paragraph.

It is a perfect story when you are just sitting around the house and the quiet surrounds you, you can lose yourself in this...

Share what you thought about Out of Service and earn reward points.