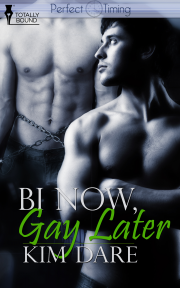 Book 3 in the Perfect Timing series

Can a bi submissive really find happiness with a master who doesn't believe bisexuality exists?

Jerry would be Denton's ideal submissive - if only he would just get his last foot out of the closet and admit he's properly gay. Denton loves Jerry, but he knows it's a master's responsibility to make sure his submissive doesn't lie to himself or the rest of the world. He can't let Jerry hide behind the bi-sexual label forever.

Jerry has no doubt that he's one-hundred percent bi-sexual. He's also well aware how much his master hates that fact. Jerry loves his master and he wants to please him, but he can't lie and say he's gay when he knows he's not. Denton would be Jerry's ideal master, if he could just accept the fact he's bi.

Eventually, somebody's going to have to give in and admit he's wrong. The only question is who?

Reader Advisory: The stories in this collection are linked solely by theme. Each story can be read on it's own and the stories can be read in any order.

“Do you reckon he spends a lot of time thinking about having sex with women?”

Denton Greenwood’s lips quirked into an amused little smile as he turned to his friend. “I have no idea who you’re talking about. But, since we’re in a gay bar, I’ll go out on a limb and guess that no one in here spends a lot of time thinking about doing anything with a woman.”

Denton’s fingers tightened around his glass as his eyes automatically sought out a blond head of hair in the crowd. Someone stepped to one side. Jerry came into view. “He’s not bi.”

Denton clenched his jaw as he watched Jerry nod his agreement with whatever the man standing next to him was saying. “He’s gay.”

Peter shook his head. “He says he’s bi. He should know.”

“I am his master,” Denton snapped. “I know which way my lover swings, and Jerry is as gay as any man in this bar.”

Even on his eighth pint, Peter seemed to realise he’d hit a nerve. “How’s it working out between…?” he trailed off.

Denton continued to watch his lover speaking to some of his friends, all of them other collared submissives, on the opposite side of the room.

“Everything’s fine,” he snapped. It didn’t sound like it when he bit the words out like that, but it was the truth.

In the months since Jerry had come under his protection, the younger man had turned out to be a damn near perfect match for him.

“He seems to have come into his own since you gave him his permanent collar,” Peter offered.

Denton nodded. That was true too. He’d never guessed that the stunning, if rather tentative, submissive who had first come to his attention would thrive so well under his rules and discipline, but Jerry had a way of wrapping rules around himself as if they were a comforting blanket, and taking every limitation his master put upon him as a gift. And, more than any of that, he had a way of throwing himself so wholeheartedly into his submission that the idea of letting him go had quickly become unthinkable.

As loath as Denton was to act soppy for anyone, even Jerry, he could just about admit that the submissive was the only one of his lovers he had ever actually fallen in love with. As long as they were alone and not doing anything overtly romantic at the time of any such admission, of course. A dominant had to hold on to some sort of standards. He wasn’t so far gone that he was willing to shout it from the roof tops or let heart toting teddy bears worm their way into his life.

Denton held back a sigh. Damn near perfect, was all well and good. But knowing his lover could be completely perfect if he would just admit he was gay just made it all the more difficult to accept the younger man’s stubborn insistence that he was bisexual with every day that passed. To feel perfection there, waiting just out of his reach, it was like a persistent itch at the back of Denton’s neck.

Share what you thought about Bi Now, Gay Later and earn reward points.