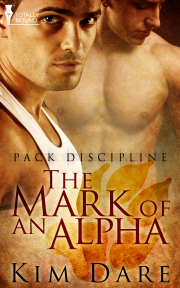 The Mark of an Alpha

Book 1 in the Pack Discipline series

Dominance and submission mean different things to werewolves than to humans. Once Marsdon and Bennett try things the human way — nothing can ever be the same for them again.

Werewolf tradition is very clear. The alpha pair is the corner stone of the pack. Equality between the alphas is everything. Alphas mate with alphas.

Human leather clubs work to different rules. Dominants mate with submissives. Power is exchanged freely and for the ultimate pleasure of all. Sometimes the most alpha men in the club find happiness with the most omega men. And sometimes the omegas are more than they first appear to be.

A wolf might be able to hide his identity and play anonymously in those clubs for a little while, but he can't ignore reality forever. Marsdon and Bennett have lives to get back to, they have packs to return to…they have wolfen traditions to follow.

They have just one more night together before they have to lose each other forever. All they can do now, is make the most of it.

Marsdon stroked his fingertips down the submissive’s spine. He’d never asked the other man exactly how he managed to put himself into his bondage before his master joined him in the back room of the club. Now the question seemed like a waste of all too precious time.

The artificial scent the other man wore took over Marsdon’s world as he stepped even closer to him. He stood very still for a moment, his fingertips resting on the bound man’s skin as he tried to push past the aroma and force it out of his senses.

It was a pleasant cologne, something that would have no doubt been considered discreet to a human’s nose. Perhaps if the man offering him his submission had been human, it would have been easier to tolerate it. But Marsdon knew damn well the man before him was as much a wolf as he was.

Marsdon closed his eyes as his free hand clenched into a fist at his side. The fragrance couldn’t hide his lover’s species, but it hid his actual identity perfectly. There was a special cruelty to that, right then.

After all the hours they’d spent together, to know that he would never even be able to walk past his lover on a crowded street and recognise that he was within touching distance of the man who’d once made his blood pound faster in his veins, his cock stiffen and his heart find peace... It was something akin to torture.

Marsdon trailed his fingers over the man’s side as he walked around him and stopped face to... Marsdon stared at the leather hood that hid most of the other man’s face from him for several long, regretful seconds. At least his lips were free. That was something he would always be grateful for.

He’d had the pleasure of his submissive’s mouth—in every sense of the term. Marsdon left the fingertips of his one hand resting against the bound man’s ribs as he lifted his other hand and brushed a knuckle over his lover’s mouth.

Those lips had wrapped around his shaft so many times over the last weeks. The submissive kissed his knuckle. His tongue flickered out to taste his master’s finger, just as it had lapped pre-cum from his cock.

Marsdon watched every eager flash of pink against his skin. Knowing he would never feel that again made it suddenly vital to imprint every detail onto his memory. It took all his strength to finally move his hand away.

The tongue lapped at the empty air. The submissive’s mouth remained open, waiting. After a few seconds, the lips came together, not once complaining that their master had robbed them of their treat.

The damn hood that kept his lover’s identity a secret had its rare seconds of usefulness. Safe while he knew the other man would never glimpse his moment of weakness, Marsdon bowed his head and took a deep breath. He was his master for a few more hours, yet. There was no point in wasting his time regretting those hours were all they would ever have.

Marsdon lifted his gaze back to the hooded face and forced himself not to fritter away precious seconds wishing he knew what colour eyes would look back at him if the hood could be torn away.

“Have you been good since our last meeting, pup?” His voice was too thick, too rough with emotion. Marsdon had to clear his throat before he could finish the question.

It was the truth. Marsdon had never had any cause to doubt that. For all his submission, he knew the man before him was too proud to lie. Still unable to look at the half-hood and not wish things could be different, Marsdon turned his attention to more pleasing sights.

Before he’d arrived, the submissive had placed himself in bondage according to the precise orders Marsdon had issued at the end of their last session. Leather encircled his wrists and his ankles, spreading him open, leaving him vulnerable to whatever his master should wish to do with him. Shackles bolted to the concrete floor and the heavy bar suspended from the ceiling kept him in place beautifully in the middle of the room.

Marsdon ran his knuckles along the other man’s skin, from the notch between his collar bones and down the juncture between his ribs until he teased his abs. Muscles twitched under his touch.

I truly love how Ms. Dare makes me really feel invested in her characters and their lives, she made me believe in them and want more of them in the future. When you want werewolves and hot man-love...

Share what you thought about The Mark of an Alpha and earn reward points.