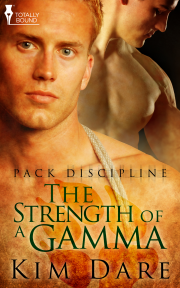 The Strength of a Gamma

Book 2 in the Pack Discipline series

Gamma wolf Steffan may have been in love with his best friend for years, but he knows that's not enough. Francis deserves a more dominant mate, and Steffan intends to make sure he gets one.

Steffan has been best friends with Francis ever since the younger wolf joined the pack after his own parents died. He's been in love with him for just as long. But when a new beta joins their pack, he knows it's time to step aside and let Francis form a bond with a more dominant wolf.

Francis has no idea why Steffan's been acting so strangely since the new wolves joined their pack. When he discovers the truth, he starts to question things he'd never thought to doubt before. What if he has no interest in a dominant mate? What if he could find the perfect partner far closer to home?

Everything is about to change for Francis and Steffan. The only question is: are the gammas strong enough to cope?

Steffan tightened his grip around his shaft as his hand moved more and more rapidly beneath the sheets. The back of his fingers rubbed annoyingly against the underside of his blanket with every stroke, but he still couldn’t risk throwing the covering back.

The night was warm enough that he’d have welcomed the caress of any breeze that crept into his bedroom through the open window, but the chance of another wolf coming into the room and catching him was far too high.

Squirming on the mattress, Steffan pressed his head back into his pillow as his hips thrust up, pushing his cock into the tight channel between his fingers and palm once more.

Biting his lip to keep back a moan, he rubbed his palm across the tip of his erection, gathering the pre-cum that leaked from the slit and smearing it down the length of his shaft. He closed his eyes for a moment and images immediately flooded into his brain.

A smaller, fairer wolf stared down at him, pleasure filling his eyes as he reached out to him. A moment passed, the picture flickered and changed. The same wolf lay naked, sprawling on a big soft mattress. He smiled and beckoned Steffan closer. Another second brought another scenario. Steffan tilted his head back and looked up at the other wolf as the familiar face loomed over him.

Steffan whimpered then, as if the other man’s fingers really were tangling in his hair. A hand failed to hold him still as his head moved against his pillow, but the vision before him still lowered his head until their lips were just a second away from a kiss.

At the last possible moment, Steffan flung open his eyes. Gasping for breath, he pushed the silly little daydreams out of his head as hard as he could, flinging them away from him with all his might.

He stared helplessly up at the beamed ceiling above his bed, but even reality couldn’t kill the fantasy completely. It was still there, tempting him with a quicker path towards pleasure.

A slow blink threatened to turn into something longer. Steffan let out a frustrated little groan. He couldn’t let that happen.

Friction was all he really needed. Steffan knew that. Part of him even believed it. Enough friction against his shaft and he’d come. It was a simple fact of biology. It still took all his strength of will to pry his eyes open.

Those sorts of daydreams had no place in his head—not even in the middle of the night. It would only make things more painful for him in the long run. It was pointless to torture himself.

Steffan repeated all those facts to himself over and over again as his strokes sped up around his shaft once more. It was far better that he should content himself with his own touch and leave a deeper sort of pleasure to other wolves.

Without any warning, a howl cut through the air, damn near loud enough to shake the dust from the rafters. Steffan held back a low, heartfelt moan. The alphas were obviously having a good time that night. He couldn’t bring himself to be surprised. There didn’t seem to be many nights when they didn’t enjoy themselves loudly enough to wake every wolf in the pack.

Reluctantly removing his grip from his aching shaft, Steffan let his hand drop to rest idly next to him on the mattress. Pushing his other hand into his hair, he counted very slowly inside his head. The only important thing now, was to stay on schedule. By the time he reached five he had to have his mind out of the gutter. By ten it was vital that he’d forced his breathing back in to something like a normal rate.

Fifteen seconds counted out, and Steffan made a conscious effort to try to slow his racing heart. Twenty. Right on cue, his bedroom door creaked open. Soft footsteps padded across the bare floorboards towards him. Steffan drew back the blankets, just far enough to welcome the other wolf into his bed, without letting his friend catch sight of his still flourishing erection.

Francis quickly joined him on the mattress. Steffan lifted one arm and welcomed the smaller wolf to rest at his side. Francis shuddered slightly as he curled up against him.

Carefully tucking a bit of blanket between Francis and his cock so the younger wolf wouldn’t notice how hard he was, Steffan encouraged him even closer, trying to make sure he felt as safe and cosseted as possible. His friend quickly took him up on the invitation, hiding his face in Steffan’s shoulder as he snuggled up against him.

...one of the sweetest wolf romances I have read in awhile...I highly recommend all of Kim Dare's wolf books as they are always unforgettable to this reviewer...

...it was the relationship development within this story that kept me turning pages. It flowed so seamlessly I continued to read until I was suddenly at the end...For a story with strong, loving characters...

Share what you thought about The Strength of a Gamma and earn reward points.