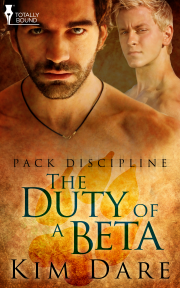 The Duty of a Beta

Book 3 in the Pack Discipline series

Caught between duty and sweet temptation, what's a wolf to do?
Gunnar has a job to do. He was brought into the pack to be mated to Alfred and that's what he's going to do. Beta's have always been charged with taking control of the trouble makers in their packs, and Gunnar is going to do his duty by his new pack if it kills him.
Just because his eyes constantly stray towards another wolf, that's no reason to alter his plans. His alphas might believe in love matches, but Gunnar believes in duty - no matter how sweet the temptation to let his thoughts wander to a very different wolf might be.
Reader Advisory: This book is best read in sequence as part of a series

Gunnar registered the sound of running water just a moment too late. Steam swirled around the hot, humid little space as he pushed open the door and walked into the bathroom he was temporarily sharing with several other members of the pack. He was just about to take a pace back, close the door behind him and wait for the other wolf to finish his shower when he realised who was standing under the spray.

There was no step back. Gunnar froze as he ran his gaze over the slim frame that had been drawing his attention ever since he joined the pack.

Talbot blinked rapidly, no doubt in an effort to clear the water from his big, blue eyes. Bubbles from the soap he’d been lathering himself with continued to conceal parts of his torso for a few seconds, but they quickly slipped away under the force of the water. The omega was left entirely exposed to Gunnar’s inspection.

Gunnar looked down for a moment, eager to see if the little wolf had been doing more than washing under the hot spray.

No, Talbot wasn’t even hard. Gunnar tried not to wish he’d taken an even longer route on his run and arrived just a few minutes later, when perhaps the omega would have been in the middle of something more interesting.

Dragging his gaze back up Talbot’s body, Gunnar met the smaller wolf’s eyes. Talbot immediately dropped his attention to the shower room floor, quick to show all due respect for their respective ranks within the pack.

That was exactly what he should do. It was precisely what Gunnar should want him to do. Still, he couldn’t help but think that a few moments in which he could admire the younger man’s eyes wouldn’t have been such a terrible thing.

Shaking his head and forcing himself to snap back into the real world, where there were far more important things for a beta to think about than pretty blue eyes, Gunnar reached for the door handle. He stopped with his fingers wrapped tightly around it as the omega stepped towards him.

“You can...” Talbot waved a hand towards the shower. “I’ll wait until after you’ve finished.”

Gunnar remained motionless for several long seconds as the steam rushed past him out of the room. He should leave. It was far too tempting for him to linger in the naked omega’s presence. Gunnar knew that. Yet, somehow, he still found himself stepping into the bathroom and closing the door behind him, sealing them in the small space with the heat and vapour from the shower completely surrounding them.

Talbot swallowed rapidly as Gunnar silently stalked towards him. It was hard to believe that he wasn’t already regretting inviting his pack mate to take his place. As Gunnar moved past Talbot and stepped under the shower, the little wolf retreated several paces, putting himself well out of range of the cascading water.

Folding his arms across his chest, the omega seemed to do his best to blend into the stark white tiles that covered every wall of the wet room. As if there was any chance they could share any space without Gunnar being acutely aware of exactly where the smaller wolf was!

Gunnar tilted his head back and let the water run through his hair. After all the rain that had fallen over the last few days, his run had left him streaked with dirt. The water turned muddy as it ran down his body and swirled around his feet. The warmth of the hot spray quickly sank into muscles that ached after so much exertion out in the cold, and sent a shiver of pleasure running down his spine.

As he reached for the shampoo, Gunnar glanced towards Talbot. He was just in time to see a far less enjoyable shudder run through the smaller man’s body. Gunnar’s eyes narrowed.

Maybe it was the displeasure in his tone, or maybe it was just his voice in general, but the omega damn near jumped out of his skin at the sound of his own name.

Gunnar bit back a curse. Anyone would think he’d threatened to hang, draw and quarter the guy on a regular basis—that he hadn’t actually gone out of his way to be kind to the omega ever since he joined the pack.

Nervous blue eyes blinked up at him from beneath a damp, blond fringe, but the little omega didn’t say a word.

So sweet!!! So unexpected. Very beautiful, sexy and enjoyable.

5 out of 5!...Kim Dare does an awesome job...has amazing characters whose flaws are actually their strengths. Kim Dare's Pack Discipline Series is definitely a series not to be missed.

Share what you thought about The Duty of a Beta and earn reward points.