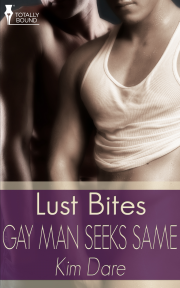 Can a man who wants nothing more than to be part of a boring old married couple really find happiness with a man whose relationships have only ever lasted until he zips up his fly?

Craig knows what he's looking for in a lover. He wants someone just like him - a nice guy he can build a nice, simple, uneventful life with. He's hoping that's just the sort of man who will answer his internet ad.

Donovan's nothing like Craig. He's all about leather, fast cars and relationships that last hours rather than years. They may work at neighbouring desks, and Craig may have a crush on his colleague, but that doesn't mean he should forget about the kind of man he's sure will make him happy in the long run.

“You realise the guy’s never going to recognise you from that ad?”

Craig McKinley ignored the question and frowned at the choice of ties laying on his desk. Red. Blue. Red. Blue. He reached for the blue, hesitated and went back to looking at each strip of fabric in turn.

“I said—” Donovan began again, from the desk to Craig’s right.

The tie was the thing to concentrate on. Pick the right tie and everything would be fine—or, at least, he’d feel more appropriately dressed when everything went wrong and it all hit the fan.

Craig nodded to each point as the slightly older man recited the ad at him. “Like I said—I told the truth.”

Donovan made a sceptical noise in the back of his throat. “Maybe—more or less.”

Craig frowned, wondering which part of the advertisement the other man thought he was lying about.

Craig didn’t need to look to the side and see the other man’s expression. He’d spent long enough staring at Donovan over the months they’d worked at adjoining desks to know just how the other man’s eyes sparkled when he teased.

Heat rushed to Craig’s cheeks, despite the fact he knew Donovan flirted with everyone in the building, male and female, in exactly the same way. Craig mentally rolled his eyes at himself. Eight bloody months, and the guy could still get him all hot under the collar with nothing more than a casual compliment.

“But that’s not my point,” Donovan went on. “He won’t recognise you, because he’ll assume you were lying. No one tells the truth in that sort of advert.”

“The kind of man I’m hoping to meet would.”

This is a must read! The story is fun and satisfying. The plot moves along at a good clip and the emotional twists and turns kept my eyes glued to my screen.

Share what you thought about Gay Man Seeks Same and earn reward points.