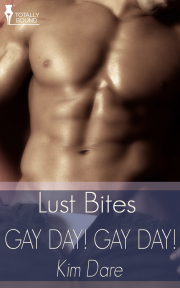 A gayday signal—as Rip happily explains to his rather straight friend—is just like a mayday signal, except in this case, the distress flag going up is decidedly rainbow coloured.

When Rip needs a friend to rescue him from his date by pretending to be his disgruntled master, it's obvious that another sub isn't going to be up to the job. He needs a dominant, and a straight one will do in a pinch.

Slade isn't thrilled about being woken up in the middle of the night and asked to rescue his bratty little friend, but he can't bring himself to leave a sub to the mercy of an unknown dominant either. And, even if most of his previous lovers have been women, he can't quite resist the temptation to show Rip how he would act if he really were catching his sub flirting with another dominant.

Who knew a straight dominant could have so much fun playing white knight to a gay submissive?

Reader Advisory: This series is connected solely by theme. Each story can be read as a stand alone title and they can be read in any order.

Slade Pearson stared at his mobile for a few seconds before peering past it to the clock on his bedside table. Two am.

“Rip, is that you?” Slade rolled his eyes at himself. Bloody stupid question. Of course it was Rip. Who the hell else would phone him that time in the morning? “What do you want?”

“Gayday!” his friend repeated, in the same urgent little whisper as before.

Slade dropped his head back on the pillow and pushed a hand through his hair as he waited for his friend to start making sense. If Rip was in his usual form, it could take a while.

“Gayday—you know, like a mayday signal, except the distress flag I’m sending up is rainbow coloured,” Rip finally explained, his voice still hushed, as if he was afraid he might be overheard.

“You mean you’re drunk and want me to play taxi?” Slade translated. “Forget it.”

“I mean he’s a damn sight more psychotic than I expected, and I need you to come and rescue me.”

“What?” Slade half sat up, his blankets pooling around his waist as he realised his friend didn’t just sound tipsy, he also sounded nervous as hell.

“I’m kind of on a date,” Rip confessed. “And I really need someone to break it up.”

“In the complete knowledge that I’m going to regret asking—how exactly do you expect me to do that?”

Slade groaned as he rubbed the sleep out of his eyes. “Don’t you know anyone else who could—?”

“All the gay men I know are subs like me. A submissive’s not going to cut it with this guy. I need a dom. A straight one will do. You don’t have to screw me, Slade, just come and get me?” A few seconds of silence buzzed through the phone. “Please?”

Slade pushed his blankets away and kicked his legs over the side of the bed with a long suffering sigh. “Fine. I’m on my way.”

Kim Dare, is a master at writing sexy short stories. How she packs into so few words such levels of drama, suspense, emotion and sex and then wraps it all up so beautifully in a happy ending is amazing...

Ms. Dare continues her series with this fascinating BSDM story...couldn't put the book down until the very end. Thanks go to Ms. Dare for a great story.

Share what you thought about Gayday! Gayday! and earn reward points.