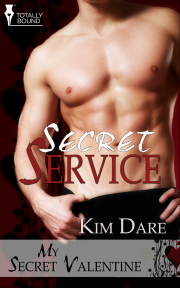 A Valentine's collection of secret liaisons…

What's more important, their love for each other or their differing attitudes to kinky sex?

Alistair has made it very clear he isn't into anything even vaguely kinky.

Sheridan knew he was in love with him the day he found that out, and then decided to stay with him anyway. Unable to ease his desire to serve at home, Sheridan volunteers at a club where he can secretly serve the patrons, and feed his submission, without upsetting Alistair by revealing that side of his personality to him.

When chance drags Alistair into that same club on Valentines weekend, Sheridan's leather mask can't keep his secret safe any longer. With his desire to serve out in the open, it's not long before other secrets start to come out and they both have to make a choice.

Does Sheridan give up on ever being allowed to submit to the man he loves, or does Alistair take the risk of becoming the master his love has always wanted?

“How can anyone, even you, manage to have so little fun at a sex club?”

Alistair Landers looked at his watch. “I have a boyfriend. I’m not interested in screwing around behind his back.” He did his best to control his tone of voice and disguise just how disgusting he found his new employer’s behaviour, but he wasn’t entirely sure he succeeded.

Jarvis Kade, senior partner at Kade, Langley & Brent, the most prestigious financial consultancy in the city, laughed and slapped Alistair heartily on the back.

“What your boyfriend doesn’t know won’t hurt him. It’s not like I’ll be telling my wife I’m out screwing guys tonight!”

Alistair closed his eyes and took a deep breath. Stale alcohol fumes filled his lungs and made him wish he hadn’t picked a different way to try and control his temper. Turning away, Alistair saw the firm’s most important client—another so called respectable married man—wrap his arms around a near-naked, young dancer.

Only the thought of another lung full of stench stopped Alistair taking a deep breath and letting it out as a sigh. He was missing Valentine’s night with Sheridan for this.

Navigating around nearly naked strangers as best he could in the crowded bar, he made his way out of the overheated space and into the cooler, higher arcade that linked all the bars in the so called “pleasure complex”.

Opposite him stood another bar. The shadowy darkness and the relative calm visible through the doorway beckoned to him, promising a safe haven where he could wait out the night in quiet peace before he had to face the wonderful prospect of driving all the drunks home. He cast a look over his shoulder, just in time to see Jarvis clumsily clamber onto the bar to dance with one of the boys working in the club. Alistair shook his head at the state of the world, went into the opposite bar and found an empty seat. Collapsing into a low leather arm chair, he rested his head back against the cushions. He didn’t want to get drunk in some club. He didn’t want to dance with half naked prostitutes. And he certainly wasn’t looking to get laid with a stranger. All he wanted was to go home to his boyfriend, lock the door and forget anyone other than he and Sheridan existed.

Alistair opened his eyes. A young man knelt at his feet, wearing nothing more than a few strategically placed leather hearts and body paint. Right then, Alistair wasn’t sure what he objected to most, the reminder of the Valentine’s Day that his new job prevented him from sharing with Sheridan, or the discovery that this bar wasn’t any more to his taste than the last one. Drunks or sadistic bastards? If he had any sense he knew he should go back to the other bar, but the comfort he found in the soft leather chair coaxed him to stay where he was for just a few more minutes. He’d put all of this nonsense out of his mind a long time ago. It was out of his system. Sitting in the club for a while wouldn’t undo any of his hard work.

“Do you serve anything that doesn’t contain alcohol?” he asked the waiter.

“Yes, sir.” The young man began to recite a whole range of soft drinks, each one bracketed by the word ‘sir’.

Alistair held up his hand half way through the list, impatient to stop the stream of honorifics which reminded him all to vividly of former times. “I’ll just have a coke, thank you.”

The man stood up. He bowed very low and stepped back several paces before he turned around and went to get his drink. Alistair looked around the room. Everyone else seemed to enjoy the attentions of the waiters. Everyone else seemed to revel in putting a smaller, weaker man on his knees, in making a stranger crawl and call them ‘sir’ just because they could. That’s what it was, he reminded himself—a perversion that meant the strong thrived and the weak were left with what scraps they could snatch from the floor.

Share what you thought about Secret Service and earn reward points.