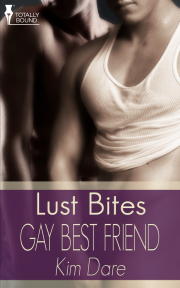 What's a straight man to do when he can't stop fantasising about dominating his gay best friend? Should he resist temptation or simply give in and enjoy?

Carlton knows Bryce better than he's ever known any other man. He's all hard edges and even harder attitude, all sarcastic quips and uncertain temper. He might be gay, but he's not the kind of guy who'd let another man push him around. He's not the sort of man who'd humour someone who can't even decide which way he swings either. And he's sure as hell not the type to submit to anyone. Or is he?

Carlton's got lots of questions. It's time for him to find some answers…

Carlton Griffiths considered the question very carefully from all possible angles. It still didn’t make the damnedest bit of sense. He glanced briefly across the table at his new co-worker, just in case that might inspire some blinding flash of understanding. It didn’t. Carlton turned his attention back to the match playing on the big screen behind the other man’s shoulder. “What are you on about now?”

“Owens—he’s your ‘gay best friend’, isn’t he? Isn’t that the kind of thing you do together?” Gary chipped in, from his right.

“Bryce?” Carlton frowned as he tossed back the dregs of his pint. “He’s fine. Just leave him be.”

“Sticking up for your boyfriend?”

Carlton leaned to the side in a vain attempt to see the screen past Matthew’s head. He’d never realised the man had such an annoyingly huge skull.

“Well, if you’re not giving each other pretty little make-overs, what are you getting up to with each other?” Simon piped up from the seat next to Matthew.

Carlton put his glass back on the table and tore his eyes away from the screen. He looked at each of his new colleagues in turn. In hindsight, the fact that they’d all seemed far more interested in him than the screen ever since Bryce went up to the bar, should have probably given him a clue much sooner.

“Fine,” he finally said, with a dramatic little sigh. “You’ve uncovered the truth at last—we’re actually madly in love with each other. Every time we can snatch a moment alone, we’re having wild sex in tons of interesting and varied positions. Now, for the love of all things gay, straight and undecided, will you please shut up so I can watch the damn match!”

Gay Best Friend is the tenth installment in the fabulous G-A-Y series and it is one of my favorites by far...This is a fast paced thrill ride with Bryce and Carlton...I love this series and can't wait...

The story is dynamic and Ms. Dare writes with gusto...The sex is very hot, and I enjoyed every single word of it because Ms. Dare writes it beautifully...definitely worth reading!

Share what you thought about Gay Best Friend and earn reward points.