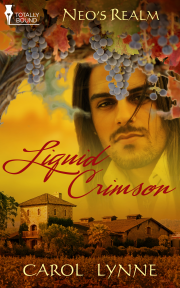 Book 1 in the Neo's Realm series

Neo Manos, son of Zeus, was to become King of the Realm, governing the Blessed Creatures that roamed the earth. Everything changed when Neo was kidnapped and tortured for over four hundred years at the hands of a vampire. After being turned into one of the monsters he'd come to despise, Neo refused to take his rightful place as king. How could he fairly govern the Realm if he hated what he'd become?

In an attempt to make amends to his son, Zeus created a perfect mate for Neo. Michael was everything Neo had ever wanted and everything he knew he didn't deserve. With blood designed only for Neo, Michael quickly becomes the target of Neo's enemies.

Soon it will become a daily battle to keep his mate safe and deal with his increasing addiction to the blood flowing from Michael's veins.

With Paganini playing in the background, Neo Manos sat in his study in front of the large window, looking out over the vines he loved. After nine hundred years, the grapes had become his lover, the wine his offspring.

“It’s almost time,” he whispered to the rows of fattening grapes. Harvest was a rebirth of sorts, the plump juicy fruit he and his workers had spent an entire year preparing for would be picked, washed and sorted before the pressing. Neo hummed to the music, taking its energy and using it to replenish his soul.

He took a sip of his special wine, and immersed himself in the music, his eyelids becoming heavy.

Images flashed before his eyes—chains, blood, so much blood, him on a table, iron stakes driven through his body to hold him down.

Neo woke himself with a scream, sweat pouring from his face and chest. The door flew open and his long-time butler, Joseph, stepped into the room.

“Are you okay, Your Highness?”

Wiping his brow with the sleeve of his shirt, Neo didn’t bother to turn around. “I’ve told you for over six-hundred years not to call me that,” he growled.

“You are what you are. You will have to kill me before I stop treating you with the respect of your position.”

Neo waved his hand. “Leave me.”

He heard the door shut as he reached for his glass of wine. How many centuries would have to pass before the nightmares stopped?

Nights spent in the vineyard meant everything to Neo. Outside, walking amongst the rows of grapes he’d helped plant, was his religion, his church, his sanctuary. His vineyard, Le Uve del Regno, or Grapes of the Realm, was his everything.

The mourning howls of several of his employees filled the brisk night air. Neo looked up at the full moon and smiled. He knew his hand-selected men were hunting in the hills. There were times, like tonight, when Neo longed to join them. What would it be like to be part of a pack? To feel the pull of companionship?

He glanced across the rows of vines to the werecats working with only the moonlight to aid their harvest. Cats truly made the best workers in his opinion. All they asked of Neo were days to lounge in the sun in their cat form, and they were more than happy to work the entire night in human form, harvesting and tending to his grapes.

The wolves were needed but not for production. Their bigger hands tended to crush more than they harvested. No, Neo needed the wolves for protection, and they were a fiercely loyal pack.

A movement at the end of the row caught his attention. Neo started to call out for his guards but stopped when a cloud moved, uncovering the full moon, casting the man in a glow of light.

Spiro. How long had it been since he’d seen his brother?

Spiro stepped closer. Once again, Neo was reminded of how different they were. Where Neo was dark, Spiro was pure light, with shoulder-length white hair and pale-gray eyes.

“What are you doing here?” Neo asked, wiping his hands on his pants. Even after all the years they’d been apart, Spiro’s presence still made Neo uncomfortable. It wasn’t a lack of love for his sibling. After all, they had shared the same mother, but Spiro made Neo want for things that simply weren’t possible since he’d been changed.

Spiro stopped. His expression took on a hurt quality. “I’ve missed you.”

“And I’ve missed you, but you know why it must be this way.” His emotions threatened to get the better of him. He and Spiro had once been inseparable, but things had changed, Neo had changed. He held his hand up to stop Spiro from coming closer.

Neo stilled. “It’s the same answer I gave you and the gods a hundred years ago. No.”

Spiro sighed. “The world needs you, brother. I have done all that I can for the past eight hundred years, but times are changing, and I can’t lead into this new century. I’m not strong enough.”

Neo snorted. His brother had been a fantastic leader to the entire non-human species they referred to as the Blessed Creatures. He looked to the fertile soil beneath his boots. He had to admit the world was indeed changing. Spiro was a kind ruler, probably too kind for the weres, fae and vampires. They had begun to take advantage of Spiro’s gentle soul. “What kind of leader would I be? I can’t even go outside during the daylight hours. LaMont made sure of that.”

“LaMont’s dead,” Spiro reminded him. “Killed by your own hands over six hundred years ago. You need to get past it.”

“Easy for you to say, brother. You’re not the one he tortured and turned into a monster.”

Spiro shook his head. “Maybe you were right. You’re not ready to lead. For how can you lead a race you’re ashamed to be part of?”

Neo returned his attention to the grapes at his side. “Are you finished?”

...a fast paced first book of the Neo Realm series...I will be waiting impatiently for the next book.

The story of Neo and Michael was brilliant. This new fantasy world Carol Lynne has created is as interesting and intriguing as all her others. The support characters are all brought to life with great...

Share what you thought about Liquid Crimson and earn reward points.