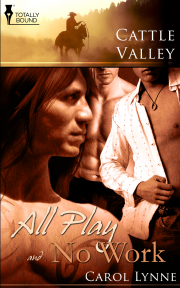 All Play & No Work

Book 1 in the Cattle Valley series

When a three man partnership becomes too much for their small Texas town, Ryan Blackfeather knows it’s time to head for greener pastures. With a new job awaiting him in Cattle Valley, Wyoming, he convinces his men, Nate and Rio to make the move.

A community built on tolerance, Cattle Valley’s one of the few places in the country where the residents won’t bat an eyelash at the threesomes relationship. Nate, Rio and Ryan fit right in. However, with Ryan busy in his new job as town Sheriff, Rio and Nate are left to wonder how they’re supposed to make a living. What use are a highly trained mercenary and a private detective in a peaceful community the size of Cattle Valley?

Nate Gills looked out the passenger window at the Rocky Mountains. It was beautiful country, but he was ready to get the hell out of this truck. It seemed like he hadn’t really had a home since he left Chicago to help his friends, the Good brothers in Nebraska.

He looked over at the hunk of a man driving. Rio was like a wet dream, the best bits from all his fantasy men rolled into one. At least he now had a family. Rio and their other partner Ryan meant the world to Nate. They may have only been together for a month, but damn, what a month.

Thinking of Ryan had him depressed again. He sighed and crossed his arms, putting his expensive Italian loafers on the dash. Feeling Rio’s hand cup his cheek he turned his head.

“I’m tired of this damn truck and I miss Ryan.” Nate automatically nuzzled against Rio’s hand.

“About two more hours and we’ll take care of both of those problems. We’ll kidnap Ryan away from the Sheriff’s office if we have to.”

Nate turned his head and kissed Rio’s palm. “I think that sounds like a good plan.” Ryan had left the small Texas town they’d been living in nearly two weeks earlier to take a job in Cattle Valley, Wyoming. Seemed the town needed a new Sheriff and they were looking for a bad ass with law enforcement training. Ryan fit their description to a T. Nate didn’t think he’d ever seen a man who looked more like a rebel than Ryan.

With the shining, long black hair of his Native American ancestors, Ryan exuded confidence and sexuality. The town of Cattle Valley had been experiencing a few problems with protestors coming in and threatening its residents. The mayor wanted somaeone tough. Since Ryan looked more like a heavily tattooed biker than a Sheriff, he was perfect. Nate was just worried about what he would find. He and Rio hadn’t yet seen Cattle Valley and Nate was born and raised in Chicago. It wasn’t like he was snooty or anything, heck he’d loved Sommerville, the small Nebraska town where’d he’d met Rio and Ryan.

Nate and Rio had been hired to investigate a scumbag in Sommerville who’d shot a good friend’s partner. If you booted out the few assholes in that town, it would have been kick ass fun. But Cattle Valley...

At least from what he and Rio had been told, there were more gays that lived there than straight people. What would that be like? The town had been founded by a man whose son was murdered for being gay. Having no other heirs, the man had donated one of the biggest parcels of privately owned land in Wyoming. His entire financial portfolio had founded the town of Cattle Valley. Seemed the guy wanted a place where gay people could live without fear or prejudice. It was all fine and dandy with Nate as long as the town had a decent coffee shop and a good restaurant.

Rio started humming along to the radio, bringing Nate’s attention back to that fine face. As he studied Rio’s profile, he thought back to the night Rio and Ryan had saved him in a club in Lincoln. He’d gone with his friends Rawley and Jeb to the upscale gay club. Nate remembered trying his best to get over his attraction for Rio and Ryan that night. They were already a long stannedding couple, and it didn’t appear they had a need for a third.

Since Nate had planned to make a weekend out of the trip to Lincoln, he’d rented a hotel room right down the street from the bar. When Rawley and Jeb said they wanted to take off, Nate happily waved them on their way. That was when the real fun began...

Wow... I am so in love with this book! It's a fantastic read, one that will be enjoyed by everyone. This story continues the tale of Rio, Nate, and Ryan - first introduced in the Good-time Boys Rawley's...

Especially as the first in a series, I found this book enthralling. I was already intrigued by Nate, Ryan, and Rio from the Good Boys books, but this one developed them into complex people and made...

Share what you thought about All Play & No Work and earn reward points.