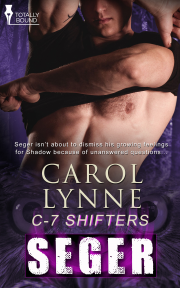 Book 2 in the C-7 Shifters series

Finding answers before he falls in love is imperative.

When Shadow, the mysterious shifter from Alrik, arrives at the clinic so weak he can't speak, the Chameleons gather to nurse the shifter back to health. Blood tests reveal more questions than answers. Who is Shadow? What is Shadow?

One Chameleon doesn't care that his boss is distrustful of the shifter. For years, Seger has longed for reciprocated love, and he isn't about to dismiss his growing feelings for Shadow because of unanswered questions. The need to protect the smaller shifter is strong, and the quiet sadness Seger recognizes in Shadow's eyes draws him in further.

Shadow has loved and lost too many times to allow himself to fall once again. While he enjoys spending time with Seger, he knows he's been called to the Chameleons for a reason. Shadow may not know the guise in which the danger will appear, but he's confident it's coming.

Finding answers before he falls in love is imperative.

Ben moved to replace Shadow’s IV solution. "I won’t give him another sedative, so he should be awake in a few hours." He glanced at Seger. "There’s a couch in my office. It’s lumpy, but at least you’ll be able to stretch out."

From the corner of the makeshift hospital room, Seger shook his head. "No thanks. I’m used to staying awake for long periods." He returned his attention to Shadow. He doubted he’d be able to rest peacefully until he found out how Shadow had ingested the poison that had nearly killed him. It was still unclear to him and everyone else why Shadow had traveled over six hundred miles to seek out Ben’s small wolf rescue clinic. It certainly wasn’t a hospital, but Ben had done his best to obtain everything Shadow needed to survive.

After Ben had left the room, Seger got back to his story. He knew Shadow couldn’t hear him, but reliving the days of his youth always helped calm him. "Where was I? Oh, yes. So the first time the monks let me pick grapes, I was horrible at it. Not only did I eat more than I put in the basket, but I smashed a good many. The others all used knives to cut the bunches from their woody stems, but they thought I was too young to handle something sharp, so I got stuck picking the sweeter grapes."

Seger chuckled. "I had to pick those damn berries one at a time. By the end of the day, my fingers were stained, but sweet as the grapes I’d handled." He sighed. "You like wine?"

When he received no answer, he continued, "It’s my passion, but it has nothing to do with the alcohol and everything to do with the smell." Seger closed his eyes. "Each bottle’s different. Sometimes I can smell the dirt the grapes were grown in, sometimes it’s the barrels used to age them." He shook his head in an attempt to dispel the memories. Remembering the abbey always sent a pouring of mixed emotions through him. He missed Pannonhalma. He missed the abbey. Hungary. And, most importantly, the monks who had called him brother and the abbot who had called him son.

"Sounds…nice," Shadow said. His eyes remained closed and his voice scratchy, but at least he was awake and listening.

Seger suppressed his instinct to cross the room to stand at Shadow’s side. "It was."

"He’s in the other room. Are you hurting?" Seger stood, losing the battle to keep distance between them. He took several steps towards the bed.

"Know what?" Seger brushed the soft blue blanket at the foot of the bed with his fingertips. He was inches away from touching Shadow. He’d helped Ben undress Shadow and get him somewhat cleaned up. As hard as it had been to keep his libido in check with Ben in the room, it had proved even more difficult after Ben had left him alone with Shadow. Knowing that Shadow was naked under the thin blanket had been torture. More than once he’d found himself staring at the subtle bulge in the blue fabric.

Shadow coughed, snapping Seger out of his wanderings. "If he’s in danger, you need to tell me."

Shadow shook his head. "Ben." He stared up at Seger, pleading in his expression.

Feeling gutted but resigned, Seger backed away from the bed. "I’ll get him."

Shadow sank back into the pillow as the door closed. The look in Seger’s eyes brought back memories. He had no doubt the bigger shifter wanted to penetrate him, but he also knew that letting down his guard often got those he cared about killed.

The door opened and Ben walked into the room. "You’re awake. I thought you’d sleep for another couple of hours."

"You left before I could tell you," Shadow began.

"Tell me what?" Ben asked, cutting Shadow off.

"Your blood is changing because of me." Shadow liked Ben. He hadn’t meant to harm the nice man.

Ben lifted his hand to the healing wound on his neck where the female wolf human had bitten him. "What do you mean I’m changing?"

Shadow didn’t know why or how the changes happened, but he’d seen it before. "If I hadn’t helped you, you would have died," he tried to explain. "I had no choice."

"I know." Ben leaned against the bed. "How am I changing?"

Shadow shook his head. "I don’t know, but you will become one of them."

"Them?" Ben glanced around. "A Chameleon?"

Overall, the series is getting better. As it progresses, the characters get more likeable and the plot thickens as you learn more and more about the world and what is happening. I found it an e...

Seger was an outstanding book. This second book in the series continues where the first left off and explores two of the secondary characters from book one. The series delves further into the lives of...

Share what you thought about Seger and earn reward points.

Other books in the C-7 Shifters seriesView Series Page