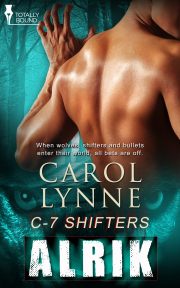 Book 1 in the C-7 Shifters series

Alrik is determined to keep sex with Ben simple, but when wolves, shifters and bullets enter their world, all bets are off.

Dr Ben Cook has devoted his life to saving the Mexican Grey wolf population from extinction. A year after being shot while looking for a large pack of Mexican greys, he's determined to try again. When Ben's sister hires one of the C-7 shifters to protect him on his mission, he feels an immediate and undeniable attraction to the huge blond protector.

Alrik's body yearns for his client on sight, but for a shifter who prefers sex without sentiment, Ben presents a problem. Centuries earlier, Alrik learned that love was a worthless emotion that only served to trap those stupid enough to fall.

Alrik is determined to keep sex with Ben simple, but when wolves, shifters and bullets enter their world, all bets are off.

The door to his office opened. Angel, the baby of the agency and the boss’s favourite, stuck his head in. “Nero needs to see you in the conference room.”

Angel nodded. “Don’t get too excited. It’s a woman.”

“Hell, as long as I can get out of this office, I don’t care who it is.” Alrik pulled his suit jacket off the back of the desk chair and put it on.

Angel stared at the mountain view through the wall of glass. “Could be worse. Nero worked hard to get us this building and location.”

Leave it to Angel to get offended on behalf of their boss and saviour. Kiss-ass. “Don’t get your panties in a wad. Shifters aren’t meant to be inside all the time, especially Chameleons. That’s all I was trying to say.” Alrik straightened his jacket.

Despite Angel’s small, five-six stature, he didn’t back down. He opened the door and gestured to Nero’s office. “He’s waiting.”

Alrik grinned as he passed. It was well known inside the C-Squad that Angel, or Mouse as most of them called him, was more than smitten with Nero. Unfortunately, Nero was either too blind or too stupid to take advantage of the hot little Spaniard.

Alrik knocked on the conference room door and waited.

Alrik stepped into the room and gave the female client a slight bow.

“Alrik, I’d like you to meet Beth Cook,” Nero introduced. “Ms Cook, this is one of our best C-7 agents.”

“Nice to meet you.” Alrik shook Beth’s hand before taking a seat at the table.

“Ms Cook’s brother, Dr Benjamin Cook, received photos from an aerial photographer of a large pack of Mexican grey wolves near Logan, Utah. Because Dr Cook has devoted his life to bringing the wolves back from the brink of extinction, he wants to find and study them.” Nero sat back in his chair. “A year ago, he was hot on their trail when he was shot and nearly killed.” He gestured to Beth. “According to Ms Cook, Dr Cook is planning to try again, and she’d like our agency to make sure he’s safe.”

Alrik had to state the obvious. “Utah’s too far north for Mexican grey wolves.”

Wolf shifters. The C-7 squad had to walk a fine line when dealing with members of their own kind. The world knew shifters existed and had tried more than once to round them up for extermination and scientific research. If there were wolf shifters in the mountains outside Logan, Utah, Alrik would bet they didn’t want to be discovered.

“I’ve already explained to Ms Cook what we may be dealing with, and she has agreed to talk to her brother about the possibilities that exist,” Nero further explained.

“I won’t allow them to be exposed,” Alrik stated.

“My brother has spent his entire adult life fighting for the survival of the species. All he wants is a chance to study them and count their numbers.”

“If they turn out to, indeed, be Mexican greys, I’ll allow that. But he has to be willing to walk away if they turn out to be shifters. Until I get that promise, he’s on his own.” Alrik rubbed the back of his neck. There were only seven of his kind left, so he took the extinction of a shifter population very seriously and would die to protect them, even from his own client if it came to that.

Alrik stood and held out his hand. “It was nice to meet you, Ms Cook.” He started to leave, but Nero called him back.

“Alrik! Be prepared to leave in two days.”

Alrik nodded as he eased the door shut on his way out.

Alrik, as well as the other C7 shifters are intriguing characters. Sexy, gay, male silver eyed shape shifters who run a protection agency...The chemistry between these two characters was hot. The sex...

This story began with a bang and never let up to the end. Reviewed by: Teresa

Share what you thought about Alrik and earn reward points.

This is book one in the C-7 Shifters series, so what can you tell us about this series of books?

I love the process of building a world where shifters are living alongside humans. I knew going in that I wanted to come up with a species of shifter that could shift into any living thing, so I came up with Chameleon shifters. They aren’t the cute, colorful lizards, well, unless they want to be. They are a unique species who can blend into whatever background needed to perform their jobs as security specialists. The Chameleon shifters are rare, even in a world where shifters of all species roam. Shunned by other shifters, the Chameleons have banded together to form a makeshift family. Readers can expect love, danger and sex with each story…

Other books in the C-7 Shifters seriesView Series Page