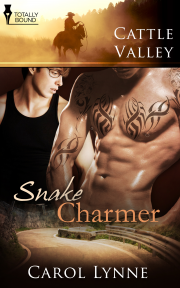 Book 31 in the Cattle Valley series

Sometimes it takes finding an opposite to show us the beauty within ourselves.

When security consultant and ex-mercenary, Gabrielo ‘Snake’ Barbas, thwarts an attack of one of his co-workers, Riley Banks, he takes it upon himself to keep the smaller man safe. His job is made harder when he discovers the attacker is actually Riley’s ex-boyfriend, a ruthless man from a very wealthy and powerful family.

After a night of passion, Snake decides to take Riley far away from Richmond, Virginia to a town in Wyoming for the annual Cattle Valley Days celebration. He should have known that sex with Riley wouldn’t be enough, but he feels he has nothing else to give such a nice guy. Riley is the sexiest man Snake’s ever taken to his bed despite Riley’s claim otherwise.

Riley knows he’s average-looking at best, so why does Snake continue to flatter him? It’s obvious he’s not going to kick Snake out of bed, even after Snake informs him that sex is all he has to give. Why does Snake see him so differently than the rest of the world?

Gabrielo ‘Snake’ Barbas pushed his jaw to the side, cracking his neck, as he continued to stare at the surveillance monitor. Training hadn’t been part of his job as a recruiter for Tisdale Security, but he hadn’t been happy with the shoddy work performed recently in the control room. He spotted a shiny red car parked in the back of the employee parking lot and waited for Brian, the technician, to take notice.

When Brian switched the feed to a different camera, showing the back of the building, Snake crossed his arms over his chest and groaned. “Go back,” he ordered.

“The parking lot.” A good technician was worth his weight in gold if you could find one, and Snake had a feeling he needed to keep looking. Brian was a nice enough guy but didn’t have the passion necessary for the work. Watching surveillance footage all day could be boring as fuck if you didn’t have the drive for it.

“What am I supposed to see?” Brian pulled the parking lot up on three different monitors, giving himself three separate angles to study.

With a resigned sigh, Snake leaned forward and tapped the glass. “What’s that?”

“How many cars do you see with people in them?” Hell. It was like trying to teach a newborn to walk.

“None, but maybe he’s just waiting for someone or taking a call or something.”

“Possibly,” Snake agreed. “But it’s your job to make sure he poses no threat.”

“How do I do that? I’m not supposed to leave the command center,” Brian blustered.

“You fucking watch him. It’s your goddamn job!” Snake was losing his patience, which didn’t bode well for poor Brian. He was beginning to rethink his decision to settle down and give up the mercenary career that had netted him a bundle of cash. Lifting his hands, he started to run his fingers through his hair, only to remember he’d cut it off, skull short, only the day before. Fuck!

“It’s only four-thirty. Where’re you going?” a co-worker asked.

“I have an appointment.” Riley Banks took a moment to clean his desk, locking all financial documents away securely before shutting down his computer. He usually stayed until at least six, but he’d received a disturbing call from his ex’s parole officer that morning.

“Did you clear it with Steven?”

“Yeah.” Riley shrugged into his suit jacket. No one at Tisdale Security knew about his past, and he hoped to keep it that way. Cal was used to him leaving much later in the work day, so if he could get out and get home before Cal came looking, it could very well save his life. It was worth pissing off a co-worker.

“See ya tomorrow,” Riley called out before leaving his cubicle. His job in the accounting office wasn’t exciting, but he felt safe working for the security company. Just because he didn’t want his co-workers to know what he’d been through didn’t mean he wanted history to repeat itself.

When the elevator doors opened, Riley stepped inside and stood in front of two muscular men. He didn’t know any of the specialists by name, but there were a few he recognised. The two behind him must be new, because neither looked familiar.

“Did you see that blonde in supplies?” one of the men asked. He groaned. “Man, she has the best tits in the whole building.”

Riley rolled his eyes. No wonder women thought men were pigs. “Her name’s Rachel,” he added to the conversation. “She’s married with a fourteen-month-old son named Ben.” He stared at the men’s reflections in the shiny elevator doors. It was obvious by the way they sneered down at the top of his head they hadn’t appreciated him butting in.

The moment the doors opened, Riley shot out of the elevator and headed to the side door that would lead him to the parking lot. Although he hadn’t approved of the way the two specialists had talked about Rachel, he wasn’t dumb enough to stick around for the fallout.

Nearing his two-year-old white Toyota Camry, Riley fished his keys out of his pocket. The hair on the back of his neck began to prickle when he heard a noise off to his left. Don’t look. Just get in the fucking car, he told himself.

I loved this book. Snake is a badass alpha male. He killed people for the government for years. He doesn't like himself and doesn't think he has a soul and therefore can't fall in love. Riley is a geek,...

What can I say? Carol Lynne has successfully written thirty-one stories about Cattle Valley, and I cannot wait for number thirty-two. If you are a fan of this series or a fan of Carol Lynne, you will...

Share what you thought about Snake Charmer and earn reward points.

I’ve always had a love/hate relationship with secondary characters. I think it’s because I love writing them so much. I swear I could write book after book with only secondary characters and remain quite content. Alas, someone always manages to push their way through the crowd, screaming, “Pick me. It’s my turn to fall in love.”

• Tigers & Devils by Sean Kennedy. A true gay romance. This is, in my opinion, the best book for readers who are delving into gay romances for the first time. The love story is real and breathtaking without the descriptive sex scenes. So, yes, the perfect gateway for curious traditional romance readers.