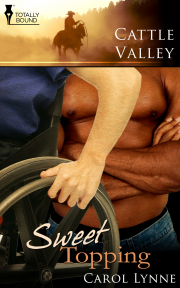 Book 3 in the Cattle Valley series

Wheelchair-bound, Kyle Brynn loves his home above the bakery he owns and runs. He's proud of everything he's managed to accomplish since the accident six years ago that took the use of his legs. At the age of twenty-six he's an independent man living on his own, despite the protests from his family. However, with his independence comes loneliness. It's not the townspeople's fault that they see him as less of a man, it's his.

Darshawn 'Gill' Gilling quit professional football at the height of his career without a word to the press as to why. Now settled in Cattle Valley, Gill's happy running his garage and gas station. His life is much easier since coming out of the closet to his friends and family. He just wishes he'd had someone to come out for. Most folks in town tend to be a little awestruck when Gill comes around, but if he wanted fans he'd have stayed in football. What he really wants is that cute little baker down the street.

From his chair, Kyle watched as Gill walked into the party at the new church reception hall. He felt his heart rate increase as he studied the six-foot-five athlete. Never before had a man turned him inside out like Gill.

Finally coming to grips with his disability had been a hard fought battle, but he thought he’d licked it. That was until Gill walked into his bakery for the first time. Suddenly he wanted something more than to walk again. He wanted to be touched and kissed. Hell, who was he kidding, he wanted to be fucked.

Before his Jeep accident, he’d been quite the player in and around his hometown of Irvine, California. Now, Kyle sighed, he couldn’t even sustain an erection for more than a couple of seconds at a time. To say nothing about the oh-so-not-sexy external catheter he had to wear to bed at night.

Kyle couldn’t believe his eyes when Gill started walking straight towards him. Gill had come into the bakery quite a bit lately. They both seemed to enjoy flirting, but he knew that was as far as a relationship between the two could go.

Gill pointed towards the folding chair next to him. “Mind if I have a seat?”

“No, not at all.” Kyle felt his hands begin to sweat where they rested naturally on the chrome wheels of his chair.

He watched in awe as the big man sat in the chair. Although full-sized, the chair looked way too small to hold its occupant.

Kyle looked down at his khaki pants and navy button-up shirt. “Naw, you’re just used to seeing me in an apron.”

“Well, you look good in the apron, too, but I was referring more to your smile. You seem happier this evening.”

Kyle blushed. How could he tell Gill the smile was because of him? “Thanks.”

Gill reached over and ran his big hand over Kyle’s thigh. “Although the pants look nice, I prefer you in jeans.”

Kyle wasn’t sure whether to be touched or appalled? No one ever laid a hand on his useless limbs. His question must have shown on his face.

“It’s not that,” Kyle mumbled. “I don’t know if anyone’s done it since I left home. Most people try and pretend the bottom-half of my body isn’t there. They never look lower than my face.” Kyle shrugged. It was hard to explain to someone not in his position.

Gill touched his thigh again. “That’s a shame. Everyone needs to be touched occasionally.” Gill gave Kyle’s leg a slight squeeze. “Do you mind if I ask you something?”

“No, not as long as you don’t mind if I refuse to answer.”

“Can you feel my hand on you?”

“Some.” Kyle nodded. “I feel the pressure but its more like you’re touching through a thick comforter or something. Does that make sense?”

Gill grinned. “Yeah. So the more pressure I apply, the more stimulus for you?”

A tighter grip on his leg had the desired effect. “Now?” Gill asked. “I don’t want to hurt you, but I want you to understand that I’m not afraid of touching you.”

Kyle felt his face heat as his cock actually twitched behind his fly. Gill would never understand the power that one sentence had over him.

“I felt it more that time,” Kyle whispered.

He looked up from his leg to find Gill staring at his lap. Shit, had he seen that twitch?

“So, have you got plans for Christmas day?” Gill finally asked.

Kyle swallowed. Was Gill asking him out of curiosity or was their flirting about to take the next step? He wasn’t sure which scenario scared him more. On one hand, he longed to feel the press of a man’s chest against his once again, but on the other hand, he wasn’t the same man he once was.

“Yeah, sorry. I’m supposed to spend the holidays with my family.”

“It’s Christmas Eve? Just when did you plan on going?” Gill asked with a chuckle.

His family had been hounding him for the past nine months about getting re-evaluated. The doctors seem to think he had promise as far as walking again. Until now, he’d pushed the idea to the back burner, but for the chance at a normal life with Gill? “I’ll drive to Sheridan in the morning and get a flight out from there. It’s cheaper than flying before Christmas. Most people are already at their destinations by then.”

Gill smiled and nodded. “Where’s home for you?”

“Here in Cattle Valley, but my parents live in Irvine. What about you? Big plans?”

“Hey, Gill, can you come over here for a minute?” Hal shouted from across the room.

Gill looked from Kyle to Hal and back to Kyle. “Sorry, I won’t be long. You staying for awhile?”

“Yeah,” Kyle answered as his leg was squeezed again. He watched Gill walk across the room. The small alarm on his watch chirped and Kyle sighed, time to visit the bathroom. He wheeled his way towards the restrooms, nodding to people as he passed.

5 out of 5! Ms. Lynne has continued her creative and inspiring series Cattle Valley. Thanks go to Ms. Lynne for another wonderful book.

5 out of 5! For all you Carol Lynne fans, The Cattle Valley series has another amazing installment. Sweet Topping is a real page turner you'll find hard to put down... I was completely taken in...

Share what you thought about Sweet Topping and earn reward points.