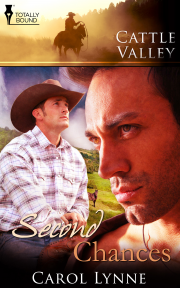 Book 28 in the Cattle Valley series

After a shotgun blast ends his career, ex-Chicago Police Officer, Robert "Oggie" Ogden, cashed in and headed for a new life in Cattle Valley. In search of a second chance, the last thing he wanted was pity, especially when it stared back at him through whisky-coloured eyes.

Drake Smith learned at an early age to carry a bigger stick than the bullies who tormented him, and although he's grown into a highly skilled fighter, he still guards himself against those with the potential to hurt him. Compassion doesn't come easily to Drake, so when he reaches out to help Oggie, he finds his surprising efforts rebuffed, making him angry at himself and the object of his unwanted affections.

When a showdown between them turns into a heated sexual encounter, Drake wonders if he'll ever feel safe again.

Drake Smith ended his call moments before his boss, Asa Montgomery, walked into his office. "Shane Rendell called. He came across a bootleg copy of DX12 on the internet."

Asa stopped in his tracks and narrowed his eyes. "How’s that possible?"

"Good question." Drake stood and walked around the desk. "As far as I know, there are only a handful of people who even know of its existence. Shane’s gonna use his hacking skills to track the sonofabitch."

"Shit!" Asa swore, running his fingers over his thinning hair. "It’s not even ready. If the public gets hold of an inferior copy..."

"Yeah, it’ll ruin us before we even launch," Drake said, finishing Asa’s sentence.

Shane came running into the office, skidding to a stop in front of Drake. "We’ve got a problem."

Drake glanced from Shane to Asa. "You remember Shane, don’t you, Asa?"

Shane jumped as if he were completely unaware of Asa’s presence in the office. "Oh, sorry, sir."

"DX12 has already been downloaded two thousand and twenty-six times," Shane said. "I managed to break the link, but it’s out there, and someone else will put it back up if they haven’t already."

Shane pulled nervously at his eyebrow for several moments. "I don’t know. I need more time to look at the version uploaded. The biggest question is why would someone do it in the first place. Everyone who’s been working on the project knows it’s not ready, so why do it?"

"Sabotage." The thought of being betrayed by someone they all trusted cut Drake like a knife.

Asa shook his head vehemently. "No, I refuse to believe one of our own would do this."

Drake shut Shane down before he could say anything. His job was to protect Asa, and if that meant shielding him from the ugly truth, so be it. "Shane, see if you can find anything on the uploaded copy. I’ll dig into the personnel records this weekend and see if I can find anyone on the team who’s questionable."

Drake turned his attention to Asa. "Let us worry about this until we can bring you something concrete to act on. In the meantime, go enjoy the Fall Festival with Mario."

"How am I supposed to do that? Hell, half—if not more—of my employees will be there. You expect me to just smile and shake hands with someone who’s trying to ruin me?" Asa argued.

Drake put his hand on Asa’s shoulder. "No, I expect you to go and enjoy being with Mario and your friends. If there’s someone out there who’s trying to hurt you, I’ll deal with them." Asa was the closest thing to a friend Drake had ever known, and he refused to let him down.

"Call me the minute you find something," Asa ordered.

"Will do." Drake glanced at Shane. It was obvious by Shane’s disappointed expression that he, too, had planned to attend the festival. He decided to cut the young man some slack. "Can you have something by Monday?"

Drake accompanied Shane and Asa out of the office before walking to his bare-bones apartment on the first floor of the building. He dug out his keys and unlocked the row of deadbolts that secured his home. It didn’t matter to him that the locks were pointless in a building as secure as he’d made Montgomery Enterprises. They kept his apartment safe from ridicule, from the prying eyes of those who would judge him.

Hungry, he entered the kitchen. Opening the cupboard, Drake shook his head. "Shit." He’d eaten the last can of soup the previous night. A quick search of the refrigerator yielded nothing but condiments and a stale loaf of bread.

With a groan of frustration, he turned back and retraced his steps through the living room. He pulled his black leather coat out of the closet and shrugged it on as he stared at his mother’s picture that hung on the wall. Not a day went by that he didn’t miss his best friend.

"I know. I know," he told the photograph. "I should eat more vegetables so I can grow big and strong." Drake grinned, grabbing his keys from his mom’s cut crystal bowl beside the door.

Drake unlocked his apartment and left the building through the back door and into the parking lot. His car was right outside in a reserved space. The sexy black Porsche Cayman gleamed in the overhead security light, drawing his appreciation. With a satisfied smile, Drake ran the back of his hand over the smooth, cold metal of the hood as he rounded to the driver’s door.

Buckling himself into the low-slung sports car, he fired up the powerful engine and let it purr for several seconds. His mom would’ve loved the car—its low profile perfect for her to get in and out of. For him, it wasn’t as comfortable as a larger sedan might have been, but as always, his decisions had been based on what would put a smile on his mom’s face.

Drake pulled out of the parking lot and headed into town. Grocery shopping was one of his least favourite things to do, but until Elliott’s store started delivering, he had little choice. On the drive past the park where the festival seemed to be in full swing, Drake turned up the classical music coming from the stereo speakers, trying to drown out the sounds of camaraderie and laughter.

I enjoyed reading it. The tension, hostility and attraction between Drake and Oggie just makes for a fairly good read all in of itself. The storyline was well done and I had trouble putting it down...

I enjoyed reading it. The tension, hostility and attraction between Drake and Oggie just makes for a fairly good read all in of itself. The storyline was well done and I had trouble putting it down...

Share what you thought about Second Chances and earn reward points.