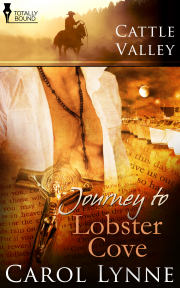 Book 32 in the Cattle Valley series

Spreading acceptance one town at a time.

When the town of Cattle Valley runs out of room for new construction, Asa Montgomery begins to look into alternative locations. He discovers a picturesque fishing village in Maine for sale and begins to make plans to purchase Lobster Cove. Unfortunately, setting up a new community takes him away from his partner, Mario, who isn’t pleased about being left behind.

Meanwhile, after years of dancing around their mutual attraction, Cullen Bryant decides the time has come to lay his feelings for Joseph Allenbrand on the line. Unfortunately, his plan is cut short when Joseph sends him away with no other explanation than he should move on.

Joseph knows sending Cullen away is the kindest thing to do for the younger man, but when he hears Cullen truly may be moving on, he realizes it’s time to reevaluate his life. Will he work out his issues in time to save what he’s spent years denying?

Vigorously brushing his teeth, Asa Montgomery stepped out of the bathroom to stare at the handsome man who still refused to get out of bed.

Mario Benta glanced up from his iPad and grinned. “Don’t look at me like that. How many times have we waited for Nate, Ryan and Rio to get to a council meeting? It’s my turn to make them wait.”

With a shake of his head, Asa strode back to the sink and spit out the minty foam. “We’ve got over a hundred applications to go through before we can call an end to the meeting. The sooner we get there, the faster we can get back to doing better things,” he said over his shoulder.

“I found an entire town that’s being auctioned off,” Mario replied from the bedroom.

Chuckling, Asa leaned against the doorframe. He crossed his arms and stared pointedly at Mario, hoping to get his partner up and moving. “Tired of Cattle Valley already?”

“Hell no.” Mario held out his iPad. “Stop being a smart ass and look at it while I wash my cock and put on clothes.”

Asa strode to the bed and took the device from Mario. He’d heard of towns being auctioned off, but he also knew it wasn’t the actual town being bought but the expenses involved in running a town. “Buying a town is a poor business decision. Vanity, pure and simple.”

“Just read the goddamn thing and watch the video,” Mario said moments before the shower turned on.

With a sigh of exasperation, Asa sat on the edge of the mattress and looked at the iPad. “Charming oceanside town Lobster Cove to be auctioned,” he read aloud. He tapped on the attached video that showcased the small but picturesque town on the coast of Maine. At only three minutes and twenty seconds long, the video did a good job of highlighting the town and surrounding landscape. He turned his attention to the written article. Lobster Cove had been a thriving New England town until the local economy suffered a devastating blow when the boatyard located at the edge of town had gone bankrupt. According to the article, more than two-thirds of the community’s houses were currently empty.

“Gorgeous, isn’t it?” Mario asked, running the towel over his short black hair.

“Yeah.” Asa set the iPad aside before reaching for his shoes. It hadn’t been an easy choice to sell his various businesses and concentrate solely on Montgomery Enterprises, but he’d done it in an attempt to carve out a more peaceful life. His gaze slid to Mario. Yeah, being able to spend each night in bed with his partner had definitely been worth the changes to his portfolio. He’d be crazy to consider taking on another project that would take him away from the man he loved.

Mario Benta sat between Asa and Hearn Sutherland at the long city council table. The special meeting had been called to weed through the incoming applications. The final phase of housing was near completion, signaling the need to handpick the future residents of Cattle Valley. He was silently pleased he hadn’t been put through the rigorous application process when he’d decided to pull up stakes and move to the small Wyoming town.

Mario read through the application in front of him. He was impressed by the guy on paper, but he also knew the final thirty residents selected would also have to go through a short interview. “Hey, Ryan, do you have openings at the sheriff’s department?”

Ryan Blackfeather, sheriff of Cattle Valley, glanced up and shook his head. “No, why, you got someone good?”

“Yeah.” Mario passed the manila folder to Ryan. “Mick Hennessey. Originally from a small town outside Allentown, Pennsylvania, he took a job with the NYPD right after graduation. Worked his way up to detective by the time he was twenty-eight. Says in his application that he needs out of the city and is willing to do damn near anything we need for a spot.”

“Sounds like a good man.” Ryan put Mick’s folder on top of the stack of finalists before turning his attention to his partner, Nate. “There room in the budget for another deputy?”

Nate shook his head. “We barely squeezed out funding for the last two we hired. Sorry, babe, but we can’t do it.”

Mario glanced at the folder on top of the stack. He hated this whole fucking process. So far, there hadn’t been a single application that he’d put on the no pile. “Does anyone else feel like we’re playing God or something?”

Several men around the table nodded, including Asa. “Unfortunately, it can’t be helped. Housing’s at capacity and we’re out of room to add more.”

Frustrated, Mario shoved his pile toward the center of the table. “We’ve been at this for hours and we’re not getting anywhere.” He stood and stretched his arms over his head. “Can we call it a night and work on these later?” He wasn’t one to shirk his council duties, but he was tired and out of sorts. All he wanted was to get back into bed with Asa and fuck out his mood.

I enjoyed seeing Cullen and Joseph get their story, the drama with their individual stories was good, as well as their history together. I loved the slow build to their sexual relationship, that fit in...

Share what you thought about Journey to Lobster Cove and earn reward points.

Has it been everything you thought it would be or not?
Writing has changed my life. Not only am I lucky enough to write for a living, but I have so many incredible people in my life that I would have never met without getting into this business.