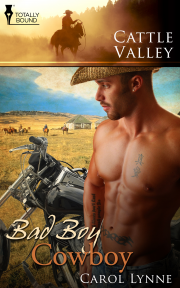 Book 7 in the Cattle Valley series

When Logan Miller pulls up to the EZ Does-It ranch atop a gleaming black Harley, bearing tattoos and killer green eyes, Jax Brolin knows he's in trouble. How can this be the same skinny kid who used to play with his baby brother? Still recovering from a secret affair gone bad, Jax knows his heart can't take another beating. Distancing himself is his only weapon, and he uses it well.

Until Logan reunited with his best friend's big brother, he'd thought the best thing to have between his legs was a motorcycle, followed closely by a horse. Now, at the age of twenty-six, Logan wants the man he's fantasised about since puberty.

The town may classify Logan as a bad boy, but all he wants is to be is a good man for Jax and he'll do anything to get the man's attention.

Rounding the corner of the barn, Jax stopped in his tracks. Shit. Ten feet away, Logan was bare-chested and showing a good deal of… “Why do you wear those jeans? Every time you bend over, half your ass is on display.”

Flustered, Jax took a step forward. “Who’s gonna complain when you’re givin’ out cheap thrills? It’s not professional. We’ve got buyers and delivery men in and out of here daily.”

One of Logan’s brows rose. “Professional?” He looked around. “This is a damn cattle ranch. I don’t see any professionals here. We’re a bunch of cowboys.”

“I’ve never seen a cowboy wear low-rise jeans that show half their damn groin, have you? Why don’t you concentrate on doing your job instead of trying to go around looking like a piece of man candy.”

Logan took several steps, coming within an inch of pressing himself against Jax. “This is me. It’s who I am, and how I dress. I work damn hard, but if you want to fire me for showing off what God gave me, do it.” Logan ran a hand over the sexy as fuck tattoos on his chest. “Maybe you just don’t want others looking at what you want in your bed.”

Furious, Jax pushed against Logan’s sweaty chest. “Watch yourself. I may’ve hired you as a favour to my little brother, but I’ll fire you in a heartbeat if you overstep your position.”

Flashing that amazing bad boy smile, Logan took a step back and held up his hands. “You’re the boss, Boss.” He walked back to the horse he had been working on and picked up the hoof pick once again.

Jax couldn’t keep his eyes off Logan’s ass as he bent over. Fucking tease. Turning on his heels, he walked back around the corner of the barn and straight to his office. He fell into his chair and looked around the room. He really needed to clean the place. A layer of dust covered everything and he noticed cobwebs hanging in the corners. Not surprising really, since the office was in the front corner of the barn, but he knew he’d been lax in keeping it clean. His mind had been on too many other things to worry about dust and spiders.

Jax dug out the work schedule. At least if someone walked in they’d think he was doing his job. His mind wandered back to the first day Logan Miller had driven up on his black and grey Harley.

“We’ll need to start on the hay next week. Make sure the bailer’s in good condition,” Jax told Neil. “Will do.”

The sound of a motorcycle coming down the ranch road at high speed drew their attention. “What the…?” Jax opened his office door as a Harley pulled up next to the barn. He recognised the face right away, but that body? That sure as hell didn’t belong to the eighteen-year old he’d known back in Montana.

Getting off his bike, Logan grinned and walked right up to Jax. “Good to see a familiar face,” he said.

Logan caught Jax off guard when he pulled him into a hug. Jax’s arms automatically went around his new hire, surprised by the muscles playing under his hands. He almost swallowed his tongue when Logan’s cock brushed against Jax’s stomach. Was he hard, too?

Jax stepped back and looked up. He’d always thought himself of average height at five-ten, but Logan made him feel like a child. “When the hell did you grow?”

Most people stopped before they turned eighteen, but evidently Logan was a late bloomer. He had to have grown at least three inches since the last time he’d seen him.

Logan flashed that bad boy smile again, as he opened his black leather jacket. With nothing but a thin white muscle shirt under it, the man’s incredible body was on display. “Like it? I’ve matured a bit since you were last home.”

“No shit,” Jax said, before he could stop himself. His eyes wandered down to the sexiest pair of jeans he’d ever seen. Shit. Five minutes and I’m already getting myself into trouble. Jax turned to Neil, who stood staring open mouthed at Logan. “Neil, show Logan his room in the bunkhouse. You’re in luck. We’ve only got four hands including you, so you’ll get your own room.”

Logan nodded and unstrapped the large duffle from the back of his bike. “I shipped some of my tools. They should be here within a couple of days.”

Jax nodded. “In the meantime, we’ve probably got what you need. Come to the office once you get settled in.” Jax pointed to the door at the corner of the barn.

Logan tipped his worn, straw hat. “Will do.”

After Neil and Logan walked off, Jax retreated to his office. He pressed the heel of his hand against the hard ridge in his jeans. He’d let his cock lead him into a disastrous affair in the past, one that had lasted two years too long. Jax had known the asshole was no good, but damn the man fucked like a dream. He was still trying to heal from the shame the affair had brought him. No way would he let his dick dictate his love life. Logan’s an employee and Jakey’s best friend, he reminded himself. He knew he’d have to make that his mantra if he was going to survive living and working on the same ranch with the man.

Share what you thought about Bad Boy Cowboy and earn reward points.