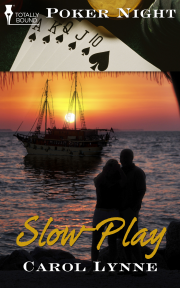 Book 2 in the Poker Night series

Charter Captain Bobby Quinn loves life on the water. What he hates is working for his brother.

Charter Captain Bobby Quinn loves life on the water. What he hates is working for his brother. After years spent restoring an aging wooden yacht, his brother bought it out from under him. In Bobby's mind, if family will screw you at the drop of a hat so will everyone else so, except for his bi-weekly poker game, he sticks to the solitude of the boat he loves.

Dr. Jules Peters knows all about solitude. When not working endless hours as Head of Emergency Medicine, he's tinkering in his garage. A collector of vintage cars in need of TLC, Jules has an impressive collection of cars but few friends.

Jules meets Bobby when he's given a cruise around the San Francisco Bay as a gift. Although their mutual attraction is explosive, neither man is ready to move out of his comfort zone. It might take a meddling med student and an off-season football coach to get these two loners to see there's more to life than caring for inanimate objects.

From his position on the lounge chair, Bobby Quinn opened his eyes and stared up at the silhouette of his brother Brad. God he hated the sonofabitch. “I’m not out on a charter, so you aren’t paying me at all.”

“So why aren’t you out busting your balls to get a charter?”

Bobby sat up and gestured towards the virtually empty marina. “It’s Wednesday. Do you see a lot of tourists around?”

Brad made that little sound in his throat Bobby hated. “Could be something to do with the location, or maybe I need to find a captain who’s willing to get out and drum up business.”

Standing, Bobby’s hands clenched into fists. “You threatening me? Your own brother?”

Brad stuck his hands in his designer suit pockets and shrugged. “Half-brother. Besides, it’s business.”

Bobby knew Brad was lying. It wasn’t business at all. Since the day he’d been born, Brad had hated his guts. Was it his fault their mutual father had fucked his secretary and then divorced his wife when his mistress, aka Bobby’s mother, turned up pregnant?

From the way Brad treated him, Bobby guessed his half-brother’s answer to the question would be a resounding yes. “And just where am I supposed to find people who can afford the prices you’re charging for a day out on the ocean?”

Brad shrugged again in that ‘I can’t be bothered with details’ way he had. “That’s your problem.”

“Is there anything else you need?” Bobby asked, ready for the conversation to be over.

Brad walked around the 1970 Grand Banks trawler. “Nope. Just checking up on my investment, making sure you’re doing the required upkeep on her.”

Bobby had spent eight years, and every penny he had, restoring the fifty-foot trawler back to its original glory, only to have Brad swoop in and buy it from the bank when he missed a couple of payments. He knew the only reason his brother had done it was to piss him off. Bobby was left with no choice but to work for Brad in order to care for the boat he’d come to love. The Gypsy meant everything to him, and Brad knew it.

“What about your quarters? Are you keeping them clean like I instructed?” Brad asked.

Two seconds away from pushing him into the Pacific Ocean, Bobby climbed down to the main deck and across the gang plank. He heard Brad yelling after him, but he didn’t dare turn around.

Bobby stormed his way towards the parking lot and hopped into his rusted 1983 Jeep. He turned off Capistrano Road onto Highway One and headed north. Dammit. He knew Brad would try to get him to move the boat closer to San Francisco, but the bay wasn’t where he wanted to be. He liked the open waters of the Pacific, and he sure as hell liked the people of Pillar Point better than the snobs he’d run into in San Francisco.

He had no idea where he was going, until he arrived at Baker Construction. Pulling to a stop, he waved at Bill, the guard on duty, who opened the heavy steal gate to let him pass. He was lucky Kent had room at the back of the lot for him to store his boat. He wove in and out of the various pieces of construction equipment and supplies, until he reached My Second Chance.

A 1966 Pacemaker 53’ Flush Deck yacht, My Second Chance was no where near ocean-worthy. Bobby still had several years, and more than a few thousand dollars, before that particular dream would become a reality.

He parked beside the make-shift scaffolding he and his buddies had erected to hold the old girl upright, and climbed the ladder. Once aboard, Bobby went below deck and looked around. He hadn’t done nearly enough work to the old yacht in the two years he’d had her. Of course he knew the reason. He’d had his heart broken when he’d lost The Gypsy.

Thinking the emptiness could be replaced, he’d saved his money and purchased My Second Chance. As he looked around the salon he realised it hadn’t happened. Hell, maybe he should just sell it?

Living and working almost an hour away from where the boat was stored didn’t give him enough time to work on it. Bobby picked up his sanding block and began to work on a small section of the woodwork.

Two hours later, he set the block down and picked up a piece of cheesecloth, running it over the smooth mahogany. He felt better than he had in a week. Getting to his feet, he sat in the cracked leather chair and surveyed what he’d managed to accomplish. He knew restoring the interior of the yacht wouldn’t get her into the water any faster, but then he didn’t have the money to put her into the ocean anyway.

As he studied the small cabin, he took inventory of everything yet to be done. It was liveable the way it was, but liveable had never been good enough before. What was the point of restoring, if you didn’t do it right.

His cell phone rang, bringing him out of his thoughts. Bobby reached into his shorts’ pocket and looked at the display.

“Hey, buddy. Eric wanted me to call and make sure everything was still set for Dr. Peters’ cruise?” Zac asked.

“Far as I know. Of course, I might not have a job in the morning.”

Bobby agreed wholeheartedly. “Unfortunately, unless I wanna find another job and place to live, I’m kinda stuck dealing with his bullshit.”

Bobby’s gaze took in the yacht’s interior once again. He knew if it came down to it, living aboard My Second Chance was an option, but the thought of completely abandoning The Gypsy made him ill.

“Eric’s working late at the hospital. You feel like grabbing a bite?”

“I don’t know. I’m at Kent’s working on the boat, and I’ve got about an inch of sawdust in my hair.”

“Cool. I’ll grab some burgers and join you. I haven’t been out there since Eric and I met.”

Bobby chuckled. “Yeah, well, don’t expect to see a lot of changes. I’ve been too busy lately to get up here very often.”

“Don’t worry. I won’t bust your balls too bad. See ya in about an hour.”

Bobby hung up and tossed the phone onto one of the built-in shelves. If he worked his ass off for the next hour, maybe he wouldn’t be quite so embarrassed to have Zac see the minimal progress he’d made.

The readers are sure to enjoy Slow Play, the second book in the Poker Night series by Carol Lynne...Slow Play also leaves the reader with a heart wrenching lead in to book three that will leave the...

Carol Lynne is my favorite author in this genre. She does an excellent job at conveying love and romance between men. I find her writing to be refreshing and without the standard stereotypes that can...

Share what you thought about Slow-Play and earn reward points.