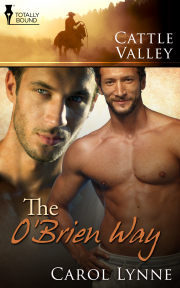 Book 21 in the Cattle Valley series

As one of the premier dancers in the hottest all male strip show in Vegas, William 'Moby' Haines had it all, men, money and freedom. When he was called home to Sheridan, Wyoming to care for his ailing mother, Moby's life drastically changed. Gone were the nights of screaming fans and eager to please one night stands. His life became a series of low-paying jobs and escalating medical bills.

Moby's luck turned the day he read an ad in the morning paper for a waiter and barback at O'Brien's Pub. Although a forty-five minute commute to Cattle Valley would mean spending less time with his mother, Moby decided it was his one and only shot at a tolerable life in Wyoming.

Burned once by the love bug, Sean O'Brien had no interest in traveling down that road anytime soon. Although the customers seemed to love his newest hire, Sean was quickly on the verge of firing the sexy stud. The way Moby allowed customers to treat him was disrespectful. If his newest hire wouldn't do anything about it Sean would, even if that meant claiming Moby for himself.

William ‘Moby’ Haines pulled on a faded sleeveless Bruce Dickinson T-shirt and his tightest low-rise jeans. It was a work night and there seemed to be a direct correlation between how sexy he dressed and the amount of tips he received. It didn’t surprise him. He’d worked in Vegas for a number of years, dancing and stripping in the hottest strip show in town, right smack in the middle of the famous Vegas strip. It had been a hell of a life, full of money and a different man every night, but one phone call from the Sheridan Wyoming Police Department had changed everything.

Moby adjusted his cock inside his tight jeans and turned off the bedroom light. He found his mother, Virginia, still sitting at the kitchen table. “I’m getting ready to leave.”

He looked at his mom’s dinner plate. “Aren’t you hungry?”

“I don’t like being left alone,” she said with a pout.

Moby bent over and kissed her cheek. “I know, but I have to work. Daddy left you with a lot of bills and it’s up to me to take care of them.”

Moby bit his tongue and picked up his mom’s plate. It wouldn’t do any good to remind her of the years they’d been forced to be away from each other. The day he’d come out had been the last day he’d seen his mom until he’d been called home to Sheridan to make funeral arrangements.

“Mrs. Baines will be by around seven. She’s looking forward to watching that television show you two enjoy.”

“Glee,” his mom reminded him. “It has a queer boy in it. You’d probably like it.”

“Gay boy, not queer.” Moby grabbed his winter coat off the back of the kitchen chair and pulled it on.

“Sorry. I didn’t mean anything by it,” she said, the pout returning.

“I know you didn’t.” It had been one of the nicer words his dad had used to describe his son. Moby gave his mom one last kiss on the cheek. “I’ll try not to wake you when I get home.”

“I don’t usually sleep well until I know you’re home safely. I don’t like you driving to that town every day. The weather’s getting bad. What if you slide off the road or something?”

“I’m a good driver,” he reminded her, slipping his feet into his snow boots.

“That’s what Bill used to say, too, but do you remember that time he ran into the fire hydrant?”

Moby didn’t bother reminding his mom that his dad was also ticketed and taken to jail for drunk driving. He decided to bring up a subject he’d been thinking about lately. “Have you ever thought of getting a dog or a cat?”

“Bill doesn’t allow animals in the house,” she reminded him.

“I know, but Dad’s not here anymore, and I think it’d be nice to have a pet.” He hoped it would give his mom the company she seemed to need. “Please, Mom. I’ve always wanted a dog.”

Virginia tapped her fingers on the table for several seconds. “You’ll have to clean up after it.”

“And I won’t have it on the furniture.”

“Okay.” Moby tried not to smile. He picked his keys up off the counter. “Maybe we can go tomorrow to the local shelter?”

“Tomorrow’s grocery day,” she reminded him.

“I know, but I think we can do both,” he said on his way out of the door. Moby scraped the windshield and side windows as the rusty pickup did its best to heat up. Before pulling out, he grabbed the shovel out of the back of the truck and added a few more pounds of snow to the bed. He wished he’d had the money to get something with four-wheel drive, but the bulk of his savings had gone to his dad’s funeral expenses and a few of the debts he’d left behind. Weight added to the truck, Moby pulled out of the driveway into the near-blinding storm.

He glanced at the watch taped to his dash and cringed. With the current weather conditions, he’d be lucky to make it to work on time. If he wanted to keep his job, Moby would have to adjust his schedule, not an easy task with a mother who needed him.

Ms. Lynne continues her incredible series with this riveting story.

Share what you thought about The O'Brien Way and earn reward points.