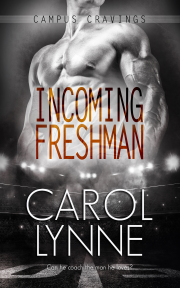 Book 13 in the Campus Cravings series

Three years ago, Chet Sloan left a promising job as Offensive Line Coach at the University of Arizona in an effort to put distance between himself and an Incoming Freshman. Bobby Ray Sikes first came to Chet's attention as a high school sophomore when he took his small Arkansas town's football team to a state championship. For two years Chet watched Bobby Ray Sikes play, knowing the boy was meant for greatness. When he recognized his feelings had grown from adoration to something more, Chet ran. In an effort to save his career and Bobby Ray Sikes's chance to one day go professional, Chet took a job at North Central Idaho University.

For three years, Bobby Ray Sikes played for a team he hated. Not only was he expected to act like the rest of the guys on the team, but the one man he'd agreed to play for had left him high and dry. After reading an article on BK House, a privately funded all-gay dormitory, in OUT magazine, he decides to do the unthinkable and transfer colleges his senior year.

Most coaches would be thrilled to learn a two time All American was transferring in to play ball for their team, but Chet's feelings for Bobby Ray Sikes haven't changed. Will he be forced to run again or can he coach the man he loves?

North Central Idaho University football coach Chet Sloan dropped the sheet of paper like it was on fire. “No,” he whispered, tapping his fingers on the table. He felt like every inappropriate fantasy was coming back to haunt him.

Swallowing around the lump in his throat, Chet picked up the phone and called Justin Nelson.

“Great news, huh? I couldn’t believe it when Sikes called and said he wanted to transfer to NCIU. Do you have any idea how many colleges would love to get their hands on him?”

“Why’d he call you instead of me?” Chet asked. Although Justin was once the head coach at NCIU, he’d taken a position as a junior high school coach after his stroke two years earlier. Unfortunately Chet was beginning to regret his decision to ask Justin to recruit for him in the off-season. Justin had already made a huge impact on the quality of players agreeing to play at NCIU, but the newest transfer could spell big trouble for Chet.

“I guess because my name’s listed on the website for recruiting. Hell, I didn’t even have to talk the kid into it. He asked me to check on credit transfers from the University of Arizona and the possibility of a scholarship and that was that. I thought you’d be thrilled. Bobby Ray Sikes is the best running back in college football. It’s an absolute miracle he wants to transfer here.”

“Not such a miracle. I recruited him out of high school for UA,” Chet informed his former boss.

“So you know him? That’s fantastic. He must think a lot of you to transfer before his senior year. If I’d have known, I would’ve transferred the call instead of just leaving you the note.”

Chet leaned back in his chair and rubbed his forehead. The older he got, the more forehead there was for him to rub. It was all his father’s fault he was starting to lose his hair at the age of thirty-two.

“Why do I get the feeling you’re less than happy about this?” Justin asked.

Chet dropped his hand. He knew he should tell Justin the truth, but confessing to your mentor that you’d fallen for an eighteen-year-old while recruiting him was just plain embarrassing. It was downright perverse that he’d begun to have dreams about Bobby Ray before the boy had even graduated high school. To top off Chet’s shame, Bobby’s family had invited him into their home on many occasions, treating him more like family than anyone ever had.

“What aren’t you telling me?” Justin prompted.

“There’s history there. He didn’t take it well when he heard I was leaving UA. Guess I’m not sure how I’ll handle seeing him again, but I know it’s good for the school.”

“It’s great for the school, but if you don’t think you can coach him, maybe we need to discuss it before he makes the move.”

Chet had no doubt he could coach Bobby. Although he’d run to Idaho to put distance between them, he’d still kept close tabs on Bobby’s career. Bobby was one of those players meant for greatness. Chet had seen it years earlier when Bobby’s high school football coach had sent him videos of the young man as a freshman.

He’d made his first visit to the family when Bobby was a junior. Sitting in the stands for the first time watching Bobby Ray Sikes play, Chet’s skin had broken out in gooseflesh. At the time it was the talent he’d yearned to get his hands on and not the young man’s body, but things had changed by the time Bobby turned eighteen. For some reason that was the magic number as far as Chet’s libido was concerned. It was soon after Bobby signed the letter of intent to play for the UA that Chet knew he was in trouble.

Afraid that the NCIU would replace him as head coach in favour of getting a big name player like Bobby Ray, Chet had little choice. “I can coach him. As a matter-of-fact, I’ve got a few ideas of how to improve his game.”

Justin chuckled. “I didn’t think it was possible to improve his game. The kid’s by far the best college player I’ve ever seen.”

“Ahh, shit.” Chet thought of the ramifications of Bobby’s decision. Although Chet knew Bobby’s secret, the rest of the world didn’t. Living in the privately owned dormitory for gay college students would be headline news. “Did you try to talk him out of it?”

“Of course I did, but he’s adamant that he wants to set things right before his career goes any further.”

“What career? If he goes through with this, it could very well be career suicide.” Chet knew he had to talk Bobby out of making the biggest mistake of his life. “You got a number where I can reach him?”

“No. He’s home with his mom right now, but if you’re hoping to reach him, you’d better do it now. I think he’s planning to head this way later today.”

Of course he’d be with Ellen. Along with his guilt over the way he’d handled things with Bobby, Chet carried the knowledge that he hadn’t had the balls to attend Martin’s funeral the previous year. Sure he’d sent a large bouquet of flowers to the funeral home, but he hadn’t attended or sent a personal note. Chet had known it was the coward’s way, but it was the only way he could guarantee Bobby’s future success.

“Does Ellen know where her son plans to live?” Chet doubted it.

“No idea. I mean she knows where he’s moving, but whether or not she knows what BK House is I don’t have a clue.”

“Okay.” Chet had a sinking feeling about the call he was about to make. “Let me talk to him and let you know how it goes.”

“I’ll be here all afternoon. Unlike you, junior high coaches don’t have to start school before the term begins.”

“Don’t rub it in,” Chet said before ending the call. He stared at the name scratched onto the piece of paper. It hadn’t taken long after he’d run to Idaho to start thinking of Bobby Ray as just Bobby, the name the young man had asked to be called. At the time he’d refused, knowing it would blur the lines between coach and...something more. A quick glance at the clock and he decided to go have some lunch before talking to Bobby. Sure he was putting off the conversation, but, hell, he’d put it off for three years, what was another hour?

I for one have been waiting for Ms. Lynne to release the new addition to the Campus Cravings series!...It was beautiful to experience as they rekindled their relationship, but will they get a second...

I enjoyed this book. There are not only a lot of sexy men and hot, passionate encounters in the story, but there are also several life lessons. Such as the importance of learning to communicate effectively,...

Share what you thought about Incoming Freshman and earn reward points.