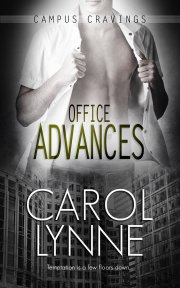 Book 8 in the Campus Cravings series

When Sam Howard's best friend gets him a part-time job at Bianchi Bytes, he's in heaven. That is until he's reassigned. Working for Jace Rawlings is pure torture. Although Sam has a crush on the gorgeous vice-President, Jace won't give him the time of day, in or out of the office.

Trying to settle into his new position as vice-President, the last thing Jace needs is temptation a few floors down. When a moment of passion erupts on a forced business trip, old wounds are reopened. Who can blame him for trying to get the object of his attraction to quit, even if the only way to do it is to act like a jerk?

Charlie looked towards Tony and shook his head, “So not funny.”

“Sorry,” Tony walked into the common room at BK House and sat on the couch. “Liam said he might be interested in a part-time job.”

“He’s in the computer room, I think.” Charlie said, munching on another handful of popcorn.

“What’s wrong with the one in his room?” Tony asked. He tried to sneak a few kernels from Charlie’s bowl but he got his hand slapped.

Tony rolled his eyes. “Can I please have some of your popcorn?”

Charlie grinned and passed the bowl over. “See that wasn’t so hard. And there’s nothing wrong with Sam’s computer. His roommate, Lark Wilsher, is meditating. He does it every evening at this time. Something about cleansing the negativity he gathers during the day.” Charlie shrugged like he didn’t believe in any of it.

“Whatever floats his boat,” Tony said, handing the bowl back.

“Thanks, I’ll stick my head back in before I take off,” Tony said as he rose off the couch.

Tony found Sam right where Charlie said he’d be. He knocked on the glass door before entering. “Okay if I interrupt?”

“Mr. Bianchi,” Sam said. He saved his work to a jump drive and turned in his chair to face Tony.

“I won’t take up much of your time. I was talking to Liam earlier and he said you might be interested in a part-time job.”

“Sure, would I be doing the same thing Liam does for you?”

“Not exactly. I need someone on site for a few hours a day. I’ve acquired a new company and their files are a mess. I need someone to go through and scan the appropriate documents into the computer. Sorry to say it’s a boring job, but it’ll pay more than you can make working part-time anywhere else.”

Sam seemed to hesitate momentarily. “Who would I be working for?”

“I’m out of classes by two. Would that give me enough time?”

“Yeah, it should. If you can get there by two-thirty it’ll give you three and a half hours a day. So can I count on you?” Tony stuck his hand out. Standing, Sam nodded and shook Tony’s hand. “Thanks, Mr. Bianchi. I won’t let you down.”

“Tony, please. Can you start this week?”

“Yeah, that would be perfect. We’re out of class this week for Spring Break.” Shaking his head, Tony chuckled. “I should know that. Hell, I live with a teacher. But in my own defence, Daniel works five days a week regardless if class is in session or not. Why aren’t you taking off like most of the college kids?”

Sam grinned and pulled out his empty pockets. “It’s the reason I need a job.”

“Come in any time. You can work as many hours as you have time for until classes start up again.”

Tony shook Sam’s hand again and thumped him on the back. “Good to have you on board. Come see me when you get there.”

“I will,” Sam said, with a wide grin plastered to his face.

The next morning, Sam took extra time with his hair, but his unruly curls refused to be tamed. He wondered if he should get it cut. Giving up, he found an elastic band and pulled it back at the nape of his neck. At least from the front he’d look somewhat professional.

Looking at his shirt, he tried to smooth out the wrinkles. “Who am I kidding? I’ll never fit in.”

“Who’re you talking to?” Bear asked walking into the communal bathroom.

“Myself,” Sam answered. “I start at Bianchi Bytes in an hour. I couldn’t look any less like a corporate employee if I tried.”

Bear smiled and pulled the end of Sam’s short ponytail. “You’ll be fine. Tony wouldn’t have offered you the job if he was worried about you fitting in.”

Sam shrugged. “I guess so.” He took one last look at himself and dug some gunk out of the corner of his eye. “Wish me luck.”

“You don’t need it,” Bear replied, dropping his towel and stepping into the shower.

Sam ran down the steps and down to the corner. He hoped the busses were running on time. He had to transfer at Jacobs Street, but it shouldn’t be that long of a ride. He’d plotted it all out on the computer after Tony had left the previous evening.

He still couldn’t believe he would be working in the same building with Jace Rawlings. Hopefully they wouldn’t run into each other much. He doubted he’d ever feel comfortable around Jace again.

The bus pulled up to the curb and Sam hopped on, depositing his money before finding a seat. He knew he hadn’t been crazy. Jace had definitely been giving off attraction vibes in the car the day they went to find Bear.

While they waited for Liam to retrieve his wayward boyfriend, they’d finally started talking. Then he did it. He had actually asked Jace out. The reaction he received had been like a slap in the face.

Hell, Sam hadn’t thought of himself as a kid since he was thirteen. Being the man of the family, he’d gotten a job at the age of fourteen. It may have been back breaking manual labour working at the grain mill, but it helped pay the bills.

Jace was what, around thirty-six, thirty-seven? Older yes, but in no way was he too old for Sam. Thoughts of that day had Sam completely depressed as he pushed open the door of the glass office building.

Walking up to the information counter, Sam gave the woman his name and asked for Tony. She smiled and pointed towards the bank of elevators. “Mr. Bianchi is expecting you. His office is on the fourth floor. Turn to your right and you’ll find him.”

Awesome story line. I love all the character and how each and everybody is involve with each other. Can't wait for the next book.

Office Advances is a fun read perfect for a lazy summer day.

Share what you thought about Office Advances and earn reward points.