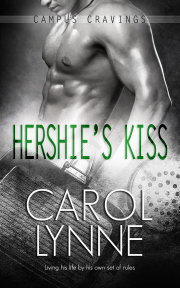 Book 10 in the Campus Cravings series

Retired Marine, Jack Hershie has lived his life for the corp. Always doing what was expected of him, Jack endured a tortuous marriage in the name of proper conduct. Now, at the age of forty-three, Jack is ready to live his life by his own set of rules.

See what happens when you put two strong Alpha males into the same house.

Caution: Have a fire extinguisher handy because this is going to be a hot one!

“I know. That’s what I want to talk to you about.” Charlie shook his head. “I thought what we did meant something to you.” He’d been torn apart when Jack received that phone call and shot out of his life. “But obviously I was wrong.”

“My ex-wife was killed.” Jack said. Charlie stiffened. Hell. He didn’t even know Jack had been married. “And that was such an emergency that you couldn’t take ten minutes to say goodbye? I’m not even going to get into the fact that you haven’t called.”

Without a word, Charlie walked across the kitchen and pushed his way through the swinging door. He was so upset he forgot the newly revised map in his head and ran smack dab into that damned end table, again. “Fuck!”

“Are you okay?” Jack asked as he placed a hand on Charlie’s shoulder.

He jerked away and nodded. He knew it was a sympathetic question. He could tell by the tone of Jack’s voice, but it drove home his disadvantage. Something he never allowed.

After side-stepping the table, he continued on to his apartment on the first floor of the dormitory. He opened the door and gestured for Jack to take a seat. “Talk,” he said, sitting in his favourite chair.

He could hear the hesitation in Jack’s voice as he began. “In the home I grew up in, being gay wasn’t an option, so I tried my best to do what so called ‘normal’ guys did. I was one of the popular kids, into everything the school had to offer.”

Jack stopped and Charlie could hear him fidgeting around on the leather sofa. “I didn’t date much, mostly just one or two times per girl. That way I wasn’t expected to get physically intimate other than the obligatory goodnight kiss. After graduation I joined the Marines, knowing I could hide my sexuality.

“I served my country for eighteen-years without anyone even questioning my preferences. That all changed when I stupidly allowed myself to get caught up in an affair with a fellow officer. People started whispering about the two of us around the base and I was called in to my commanding officer’s office and questioned. I denied it of course, so did Rodney. We’d both worked too damn hard to get to our ranks. We weren’t in love or anything, more like fuck-buddies.”

Charlie ran his hand over the back of his neck. How could the mention of one of Jack’s past conquests make him jealous? It was absolutely ridiculous.

“After that I made it my mission to assure my fellow Marines that I was just as butch as they were. I started flirting with a civilian who worked on the base. Becka and I began dating. I always tried to make sure we were seen on base together and around town. I found the physical part of our relationship distasteful at best, but knew it was required. Of course, as my luck goes, Becka ended up pregnant. I did the right thing and married her.”

Charlie hadn’t realised he’d gasped until Jack stopped talking. “I’m sorry if this is upsetting for you,” Jack said.

“Brian was born and I tried my best to be the kind of husband and father they both deserved. After about a year, Becka began to suspect the earlier rumours about me were true. I just could no longer pretend our love making was anything but work. She gave me an ultimatum. I could keep my position in the Marines if I allowed her to take Brian away. I was to have absolutely no contact with either of them except the monthly cheque I was to send.”

“Fuck,” Charlie whispered. He couldn’t imagine being in the position Jack had been put in. His life was far from perfect, but Jack’s read more like a soap opera.

“The stupidest thing I ever did was to agree to the arrangement. I gave up my only son for my career.”

Charlie could hear the catch in Jack’s voice and knew the other man was getting choked up. He knew he should go to him, but the hurt was still too strong.

“I remained in the Marines until my retirement last year. I thought I’d accepted the loss of Brian over the years until I received that phone call telling me Becka had been killed. Suddenly my world was turned upside down and I knew I had a chance to once again be a father. I’m sorry that I hurt you when I ran out like that.

The moment I heard, all I could think about was getting to my fifteen-year old son. I found out once I got there that Becka had told Brian I was killed in the line of duty.”

5 out of 5! Why, oh why, does Carol Lynne do this to me? I'm sure the reason is to keep me hooked and coming back for more. Hershie's Kiss is the tenth book in the Campus Cravings series...

4.5! I absolutely love everything that Ms. Lynne touches; she has delivered a winner with HERSHIE'S KISS from the Campus Craving Series.

Share what you thought about Hershie's Kiss and earn reward points.