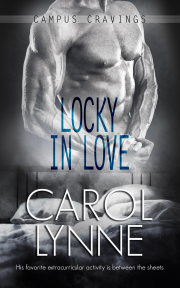 Book 15 in the Campus Cravings series

Born into an affluent family, Locky never faced a problem his family money couldn't fix. Everything changed the night he stumbled upon a young gay man beaten to death and left in the parking lot beside his car. Unable to get the image of the boy out of his head, Locky quit his father's law practice and took a job at BK House. Adapting to a new way of life is difficult, and it's made even more so by a raven-haired hottie who pushes every one of Locky's buttons.

College courses have been a breeze for junior, Becket Chandler. He's sailed through his classes with ease, despite their advanced subject matter. His love life, on the other hand, has been an ongoing struggle with no easy answers. While his former housemates enjoyed gaming, sports and drinking, Becket chose sex as his favourite extracurricular activity.

When Becket arrives at the BK House, he's ready to tackle another year and a few more willing seniors. Younger men are fun to play with from time to time, but nothing satisfies him like an older, bigger man staring down at him, preferably with Becket's legs spread and draped over his broad shoulders. From the moment he shakes hands with Locky, all he can think about is getting the drop-dead sexy Director of Student Life into his favourite position. Despite Becket's continued interest, Locky continues to play hard to get. Luckily, Becket doesn't give up easily.

Reader Advisory: This story deals with the sensitive subject matter of rape. However, it is not in any graphic detail.

Becket smiled for the first time in a month. "Hey, it’s Becket."

"Staying out of trouble?"

"What fun would that be?" Becket rested his feet on the porch railing. "I was wondering, I know I’m not signed up for summer classes, but do you think it would be possible for me to come back early?"

"Why would you want to? The campus is dead this time of year."

"I live in a town of thirteen hundred and thirty-four people stuck out in the middle of fucking corn fields. Believe me, you don’t know the first thing about dead." Without a car of his own, Becket was forced to drive the dirt roads of Crescent Ridge, Iowa, in his grandpa’s old rusted out pickup. It would be different if his dad actually needed his help on the farm, but with three older brothers, all living and working on the six-hundred and seventy acre spread, Becket’s help wasn’t needed or wanted.

"Locky’s not here if that’s what you’re hoping for," Charlie informed Becket.

Resident Assistant Lockland Regent was the golden unicorn, the one man Becket continued to drool over but had never been able to conquer. It didn’t seem to matter how many times he caught Locky looking at him with lust in his eyes, he always turned Becket away when the offer was made.

"What about Fallon?" The uncle of one of his old housemates may not have been Becket’s first choice, but Fallon was hot and rich, two of his favourite things. Besides, for some reason, Fallon’s ongoing interest in getting Becket into bed seemed to infuriate Locky.

"Stay away from Fallon. He’s too damn old for you," Charlie scolded.

"You’ll clean. This place needs a good cleaning from top to bottom before the fall semester, and since I obviously can’t do it, and Jack’s taken a job at one of the local diners for the summer, we were planning to hire it out. However, since you have the time, you can do it in exchange for room and board. How’s that?"

The thought of cleaning the house made Becket groan. He weighed the work involved against his need to be within a two mile radius of gay bars and, as usual, his sex drive won out. "Fine."

Locky loosened his tie after a long day and fixed himself a Jack and Coke. The money he earned practicing law at his father’s firm would pay his bills for the rest of the year, but the clients he dealt with made him feel dirty at the end of the day.

"Lockland, are you joining us for dinner this evening?" his mother, Gloria Regent, asked.

"Not tonight. I’m meeting friends." Locky took another sip of his drink and settled himself on the tufted red leather sofa in the den. He cursed himself for giving up his apartment, but it didn’t make sense to hold onto the damn thing when he was only home three months out of the year.

"Will Brooks be driving you?" Gloria asked.

The last thing Locky needed was for the family chauffeur to know his business. "No, I’ll drive myself."

"Well, be careful, dear," Gloria said before leaving the room.

Locky finished his drink before going up the back staircase to his bedroom suite. He had no plans to meet friends, but he did hope to get laid. It wasn’t often that he went in search of a random partner for the night, but he needed to get Becket out of his head and his dreams.

Showered and dressed to impress, Locky left the house. He ate a quick dinner at his favourite restaurant in Portland before arriving at the club around ten-thirty. It was still early for the usual crowd, but that suited him fine. He had a few ghosts he needed to exorcise before he’d be in a party mood anyway.

"Hey, Bobo," Locky greeted the owner. He’d known Bobo for years and had even helped him out of a few tickets early in his career. It was the first time he’d stepped foot in the club since the night that had changed his life.

Bobo’s blue eyes opened wide. "Locky?" He grabbed Locky into a bear hug, fitting for someone of Bobo’s large size. "I didn’t think I’d ever see you again."

Ms. Lynne handles all of the sensitive issues surrounding rape and mental health issues masterfully...Locky In Love is an amazing story.

Both Locky, the older of the two, and Becket are far more complex characters than they seem to be and I loved discovering all the layers as they were slowly revealed by their interactions and several events. If you...

Share what you thought about Locky in Love and earn reward points.