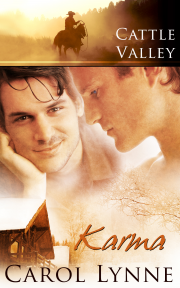 Book 33 in the Cattle Valley series

From an Olympic gold medalist to a jail inmate, one man’s journey to rebuild his life after hitting rock bottom.

Once a celebrated athlete, Guy Hoisington fell from grace and into a bottle. For years, the citizens of Cattle Valley went out of their way to avoid the drunk lecher, but one man, Shane Rendell, not only dated Guy during a brief period of relative sobriety but fell in love with him, too, before he was hastily cast aside.

Living within the thick haze of liquor and sex, Guy rarely made good decisions, but on one particular dark night, he makes the worst decision of his life when he decides to drive down the mountain after a long evening of drinking. He wakes from a coma to discover he’s run an innocent man off the road and has a life-changing injury. For the first time in a very long time, Guy is able to look at himself through sober eyes, and he hates the man in the mirror. In one stupid move, he’s lost what little self-respect he had left.

Shane has tried for two years to move on with his life after falling for the town alcoholic, but when he learns of Guy’s accident, he rushes to the hospital. Although the entire town may hate Guy, Shane is determined to prove that Guy hasn’t lost everything.

Shane handed his favorite nurse a box of treats from Brynn’s Bakery. “Really?”

Jessica smiled and set the doughnuts and cinnamon rolls on the desk. “He’s been coming out of it since Tuesday, but when he woke up yesterday and saw his leg, we had to bring in the psychologist. He’s doing better, but he’s a real bear this morning. We tried to call but your phone must not be working.”

Shane’s gaze shifted to the open door of room five-twelve. “It broke, and I haven’t had the chance to get a new one,” he confessed. He didn’t go as far as telling her he’d thrown the damn thing against the wall when a woman from the hospital administration office had phoned to tell him they were going to move Guy to a long-term care facility.

“Well, now that he’s awake, things should get easier for you,” Jessica said.

Shane had made the hour-long journey to Sheridan countless times since the morning after Guy Hoisington’s car accident. Unfortunately, the hospital staff believed he and Guy were domestic partners who had simply never got around to combining their bank accounts. He felt shitty for perpetuating the lie, but it had been his only advantage in the days and weeks following the horrific wreck.

Jessica moved to stand next to Shane. “I’m sorry. He hasn’t asked for you, but I don’t want you to take that as a bad sign. It isn’t uncommon for coma patients to feel foggy for a few days, so don’t let it worry you.”

Shane swallowed around the lump in his throat. He’d grown close to the nursing staff and hated to admit his deceit. “I understand.”

Jessica’s mouth turned down in a frown. “He did ask if his father had been in to see him.”

“Damn.” Shane sighed and rested his hands on his hips. “What did you tell him?”

She shook his head. “Just that the hospital had been in touch with him on several occasions.”

“Good.” Shane didn’t know what kind of relationship Guy had with Buck Hoisington, but when the hospital had contacted Buck about the accident, Buck had hung up on them. They’d tried on two other occasions, but when the second the hospital administrator had identified herself, Buck had ended the conversation. Not once had Guy’s father asked about his son’s condition. It didn’t make sense to Shane because he remembered watching Guy on television during the 2002 and 2006 Winter Olympics and both times his father had been at his side the entire time. There was a famous picture that still floated around, on occasion, of Buck standing with his hand over his heart and tears in his eyes as his son accepted one of his four gold medals. Shane wondered if Guy’s drinking had caused the rift between the two men, or if their issues had caused the drinking.

I have to say this book was extremely amazing. It is a book that I would say is about getting a second chance to make right all the wrongs that one caused.

This book was beautifully writt...

'Karma' is not a long story, but Carol managed to put a lot of emotion into it. Guy and Shane are interesting characters and it seems are now on the right track... Thanks, Carol, for giving Guy and S...

Share what you thought about Karma and earn reward points.