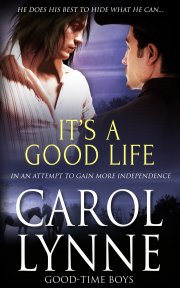 It's a Good Life

Book 5 in the Good-Time Boys series

Have you ever wondered what life would be like without you?

Although Sonny Good still suffers repercussions from a gunshot wound to his head, he refuses to let them interfere with his life. He does his best to hide what he can from his partner, Garron, in an attempt to gain more independence. When a car accident forces Sonny's newest health concern to the foreground, he begins to slide back into the pit of despair he's worked so hard to crawl out of. What use will he be to his family and friends if he can't lead a normal life?

When a seizure leaves Sonny in need of emergency care, a CT Scan reveals the cause of his continued blackouts. Faced with a risky surgery, Sonny begins to wonder if his loved ones would've been better off if he'd died the day of the shooting.

Faced with the prospect of losing the man he loves, Garron is determined to show Sonny what he has to live for.

Sonny Good stood under the spray of hot water and massaged shampoo into his hair. Before the shooting, he would’ve never let his hair grow. Unfortunately, nothing about him was the same as it had been before Lionel had changed him forever.

He rubbed the scar that still refused to re-grow hair. He didn’t need a small bald spot to remind him of what had happened. His seizures, memory loss and physical limitations did that on a daily basis.

The phone rang as he was rinsing off. “Shit.”

He’d been expecting a call from Lilly with news of her doctor’s appointment, and he wasn’t about to miss it. Throwing back the curtain, he grabbed a towel and raced to the bedroom phone. “Hello?”

“Well? What’d the doctor say?” Sonny tucked the phone between his shoulder and ear and wrapped the towel around his waist.

“That this baby doesn’t plan on coming out anytime soon.” Lilly cleared her throat. “I don’t suppose Garron is home, is he?”

“Nothing. I mean...well, I’m on Mills Road with a flat, but Ryker and Ranger should be back from the livestock sale in an hour or so. I’ve got my book with me, so I’ll just read for a while.”

“The hell you will.” No way would he let his sister-in-law sit beside the road at any time, let alone when she was eight and a half months pregnant. “I know how to change a damn tire. I’ll be there in ten minutes.”

Sonny ended the call and turned his ringer off. There was no doubt in his mind that Lilly was already calling Garron. “Let her,” he said to the room.

Even if Garron left Lincoln immediately, Sonny could have the tire changed and Lilly home safely before Garron could make it to town. He mopped at the ends of his shoulder-length hair as he dug his clothes out of the dresser. Three minutes later, he was dressed and shoving his feet into his boots. Finding the keys to the old ranch truck didn’t take long—they were above the sun visor. “Real sneaky, Garron,” he said, rolling his eyes.

A few minutes later, he pulled up behind Lilly’s sedan. He couldn’t help but smile at the baby’s car seat already installed in the back. Ranger’s doing, no doubt. His twin brothers, Ryker and Ranger, had finished decorating the nursery while Lilly was still in her first trimester. Everyone, including their mother, had warned them about planning too early, but the twins refused to wait.

Sonny climbed out of the truck and flipped the collar up on his coat. He grabbed the floor jack out of the back and knocked on Lilly’s car door. “Pop the trunk,” he told her.

“You don’t have to do this,” Lilly said, getting out of the car.

onny whistled. “I do believe you’re even bigger than you were last weekend.”

With a chuckle, Sonny loosened the lug nuts on the driver’s-side rear tire. “You know you’re beautiful no matter how big that belly of yours gets.”

“You’re just buttering me up.”

“Why would I do that? I know you’ve already called Garron. You know he’s going to chew my ass out for this.” Although it had been three years since the shooting, Sonny’s doctors still refused to clear him to drive. The seizures hadn’t got any worse, but he still had them on occasion.

“I didn’t make you come help me. I could’ve waited.” Lilly pulled her coat tighter around herself.

“What good am I if I can’t help my sister-in-law when she needs it?” He nodded towards the truck. “Go get in the cab and turn the heater on—it’s too cold for you out here.”

Lilly stopped and put her hand on Sonny’s shoulder. “Thank you.”

Sonny smiled at his brothers’ wife. “Love ya, kid.”

It was the first time in years that Sonny had changed a tire. It took him a lot longer than he remembered. He tried to blame the frigid December weather, but the truth was, his fine motor skills weren’t as good as they used to be. Predictably, by the time he’d finished he was in a bad mood. Sonny did his best to hide his self-loathing from Lilly.

“You’re all set,” he told her after loading the jack.

Lilly hugged him as close as she could. “Just so you know, I didn’t call Garron.”

“Thank you.” Sonny kissed her cheek before walking her back to her car. “Make sure Ryker gets that tyre fixed.”

Sonny shut Lilly’s door and waited for her to drive off, throwing up a wave. After getting into his truck, he tore off his gloves and shook his hands. Damn. It was so fucking cold outside that his fingers had gone numb even inside his heavy gloves.

If he hurried, he could make it to the ranch and take a short nap before Garron got home.

It’s bittersweet, sexy and heartwarming. If you like sexy cowboys, a sweet romance, love that lasts through trials and tribulation, a good holiday story and some hot man-sex, this is for youRead more reviews

Share what you thought about It's a Good Life and earn reward points.