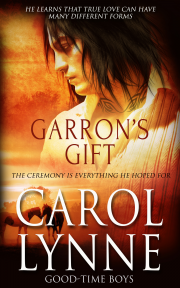 Book 2 in the Good-Time Boys series

Garron Greeley thought he had it all—a great new job and the man of his dreams to call his own. When his lover Sonny sprang the idea of a commitment ceremony on him, Garron couldn’t have been happier. Except for a few men, the town seemed supportive of their relationship, and many showed up to witness their special day.

The ceremony is everything he hoped for, until an act of bigoted violence shatters Garron's world, leaving his new husband in a pool of blood in the middle of the street. He's left wondering if asking for everything will leave him with nothing.

Working with his new brother-in-law, Garron sets out to prove the identity of the shooter and bring him to justice. Along the way he learns that true love can have many different forms.

Publisher's Note: This book was previously released by Totally Bound Publishing under the same title. It has been re-edited for re-release with Pride Publishing.

Garron Greeley was leaving the police station when his cell phone rang. Looking at the display he smiled. “Hey, hot stuff.”

“They shot him,” his partner, Sonny Good, yelled into the phone.

Garron’s stomach bottomed out as he stopped in his tracks. “Shot who?”

“Buford, someone killed him.”

“Shit, I’m sorry. Did you call Rawley?” Garron hurried to his black Harley and climbed on.

“Yeah, he’s gonna stop and get Jeb and head this way. How long before you get here?”

“I can make it in about fifty minutes. Will you still be there?”

“Yeah, it’ll take a while I’m sure. We’re just past the pond on Jeb’s side of the fence.”

Sonny hung up and Garron looked at the phone a moment before slipping it back into his pocket. Starting his bike, he roared out of the parking lot toward home. Funny how the Flying G had become home so quickly after moving in with the man he’d fallen head over heels for. Garron decided to take the interstate to shave off a few minutes. Usually he took the back roads, but he had a feeling Sonny needed him as soon as he could get there.

Riding down the road, he thought about the phone call. He knew Sonny was supposed to go into town to pick up some new fencing material. Garron wondered if something had happened. Lionel Hibbs used every chance he got to run the two of them down to the rest of the town. At first it was just little comments here and there, but it had moved into shouts of vulgarity as soon as Lionel spotted one or both of them in town.

Garron’d had to quit bartending two weeks early because Lionel made such a scene every time he’d come into the Dead Zone that Jim, the owner, had thought it was best. Sonny tried to act like the name-calling didn’t bother him, but Garron knew different. Sonny’d grown up in Summerville, and for him to suddenly shy away from going into town was a sure sign.

The closer he got to the ranch the faster he went. Something had to have sparked this sudden change in Lionel’s behavior. Killing ranch animals was a big step from bigoted words shouted across the street.

Garron parked his bike by the shed and drove the four-wheeler to Sonny. Topping the slight rise in the landscape, Garron spotted Sonny, Jeb, Rawley and another man surrounding what he guessed was Buford. Slowing down, he stopped just inside the broken fence. Rawley looked up and walked over.

“Glad you finally made it. My brother’s going off the deep end.” Rawley rubbed at the back of his neck. Garron could tell there was something else Rawley wanted to tell him.

“What?” Garron asked as he walked to the broken barbed wire fence.

“Sonny and Lionel got into a fight this afternoon in town. I think Lionel ended up with a broken nose, but Sonny came away with a black eye.” Rawley said as he followed Garron over to the fence.

Turning back, Garron pointed to the broken wire. “You look at this, it’s obviously been cut. I’m gonna go check on Sonny.” He walked toward the man he loved, fire heating his veins. How dare Lionel touch Sonny. He had half a mind to go into town and find that bastard right now. The only thing stopping him was the look on Sonny’s face when Garron neared. He opened his arms, and Sonny immediately walked into them. “You okay?” He looked down into Sonny’s bruised face.

“No, but I’m better now.” Sonny looked over at Buford. “He just killed him, for no good reason.”

Rubbing his hands up and down Sonny’s back, Garron looked over at Jeb. “The fence’s been cut.”

Jeb nodded. “I figured as much.” Jeb pointed toward the older man. “This is our vet, Dr. Mac Whitcomb. Mac, this is my brother Garron.”

The two men shook hands. Although his hair was completely gray, Mac didn’t appear to be much over forty-five. He looked Mac in the eyes. “Can you tell how long ago this happened?”

I really enjoyed this story, and am loving this series and the character’s being added to each account. If you like ranchers, lawmen, gay romance, contemporary...

This makes for an action-packed read. If you like cowboys, hot sex, horses, ranches, good-looking men, evil villains, and more action, you should enjoy this read.

Share what you thought about Garron's Gift and earn reward points.