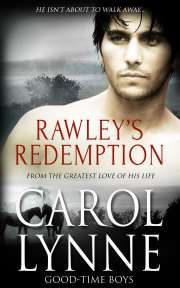 Book 3 in the Good-Time Boys series

After unjustly losing his job, ex-Sheriff Rawley Good turns to the one person he has long denied himself, rancher Jeb Greeley. But Rawley soon learns he can't always be the boss when it comes to love. Relationships aren't like running a town and a man like Jeb is not about to be dominated—even in the name of love.

Though he is no longer the Sheriff of Summerville, Rawley won't back down from his investigation into his brother's shooting. Something's not right. There is a murderer to catch, corruption to fight and his job to get back. More importantly, Rawley isn't about to walk away from the greatest love of his life. Sheriff or not, Jeb Greeley is the man for him…

Now he just needs to convince him of that fact.

Standing at the bottom of the steps, Rawley looked up at the only person he’d ever been in love with. “I’ve been relieved of my duties as Summerville Sheriff. I no longer have a need to hide the way I feel about you. Care for a roommate?”
Jeb didn’t say a word, but Rawley saw first the shocked look and then the brief smile. He simply held out his hand and waited for Rawley to join him. Turning around, Rawley waved good-bye to Meg, and picked up his bags. With a deep breath and a prayer on his lips, he walked up the steps to his future.

Taking his hand, Jeb led him into the living room and through to the master bedroom. “I’ll clear some closet space out for you later.” Jeb ran his hands up Rawley’s chest and smiled. “Welcome home.”

Letting out the breath he’d been holding, Rawley dropped the bags and wrapped his arms around Jeb’s lean body. Leaning down, he whispered a kiss across Jeb’s soft lips. “I love you.”

“I know,” Jeb said as he opened his mouth for Rawley’s tongue.

The kiss was savage, both men tired of waiting. As Rawley continued to plunder Jeb’s mouth, he began to pull his soon to be lover’s clothes off. When he had Jeb shirtless, he broke the kiss and knelt before him. Lifting Jeb’s foot, Rawley removed his boots before running his hands up Jeb’s thighs to land on his fly. Burying his face in Jeb’s crotch, he inhaled the scent of his man as Jeb ran his fingers through Rawley’s short black hair.

Looking up, Rawley moved his hands to Jeb’s button and slowly relieved him of his jeans and underwear. Pushing them down the leanly muscled thighs, Rawley’s hands began to shake. “I can’t believe I’m so nervous.” Hiding his face against Jeb’s closely cropped thatch of hair, Rawley inhaled again. Without looking up, he ran his tongue around the crown of Jeb’s cock. “I’ve never done this before. I’ve had it done a time or two, but this will be my first time giving.”

Jeb ran his hand over Rawley’s cheek. “If you’d rather not, I’ll understand.”

“No. I can’t believe how much I do, but I want to.” Rawley held Jeb’s generous shaft by the base and licked his way up and down its length. He felt each ridge and vein against his tongue as he heard Jeb begin to moan. Taking the heavy sac into his mouth, Rawley was amazed at how soft the skin was, no hair to get in the way.

As he took the head into his mouth, Jeb thrust forward. The generous erection hit the back of his throat and Rawley gagged slightly.

Shaking his head, Rawley refused to release his hold on Jeb’s cock long enough to answer him. He moved closer to the tip and sucked. He felt his cheeks hollow out as Jeb moaned. God, Jeb tasted good. Wrapping his hands around to rest on Jeb’s sweet ass, Rawley ran his fingers through the crease. Finding Jeb’s tight rosette he added a little pressure with his fingertip until it slid in.

Rawley drank it all and begged for more. He licked Jeb clean before leaning back on his heals. “Nap?”

Jeb shook his head and spread out in the centre of the bed. “You’re turn now.”

Oh, Rawley liked the sound of that. He quickly stripped off his jeans and T-shirt, it still felt weird not wearing the uniform, but Jeb was good at taking his mind off everything else. With the last of his clothes in a pile on the floor, Rawley stalked toward Jeb. Watching his fine as fuck man slowly stroking his spent cock, Rawley felt pre-come dripping down the length of his shaft. “You have any condoms?”

Jeb blushed and pointed toward the bedside drawer. Inside he found a new box of rubbers and a sealed bottle of lube. Rawley held the bottle up and whistled.

“Wow, you bought the good stuff.”

Pulling Rawley down beside him, Jeb began licking Rawley’s chest. “I made a trip to Lincoln. There’s a little shop there with all kinds of stuff.”

Working on the seal, Rawley looked up and grinned. “Yeah, what kind of stuff?”

Jeb shrugged and finally took the bottle out of his hands. He opened it within seconds and handed it back to Rawley, spreading himself open. “You know, toys, costumes, stuff.”

Before slicking his fingers, Rawley wanted a taste of his man. He’d seen this done, but had never thought he’d ever feel like doing it. Looking at Jeb, loving Jeb, changed everything. He set the bottle on the bed, and slowly licked his way down his lover’s body. Positioning himself between Jeb’s already spread thighs, Rawley ran his tongue up the crease of Jeb’s ass. “Fuck, yeah,” he moaned at the taste and smell of this man, his man. Centring his attention on the tight pucker of skin, Rawley kissed him, snaking his tongue out to taste. He suddenly had an overwhelming desire to claim Jeb and his body.

There's a lot of love in this story. It's also about dedication and learning to be honest with those you love. It's also the introduction of my favorite ménage—Ryan, Rio, and Nate, before they move...

Share what you thought about Rawley's Redemption and earn reward points.