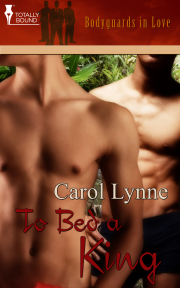 Book 6 in the Bodyguards in Love series

Bodyguard, Raven Stone, has a reputation for trying to steal the husbands of the clients he's hired to follow. When he's sent on a special assignment to guard the Crown Prince of Jurru, Raven's first instinct is to use his sex appeal to win over the future king. He's told the Crown Prince is straight, but Raven has yet to meet a man he couldn't lure into his bed.

For years, Crown Prince Ghazi Zahar, has managed to hide his sexuality from the hordes of paparazzi that continue to follow his every move. So why does his new chauffer make him yearn to take risks? When the newly crowned king of Jurru discovers Raven's true identity, he asks him to return to his island home and help protect his young nephew. Living his life so close to temptation has Ghazi in a constant state of agitation. Would the people of his country accept a gay king?

With the sun slowly dipping into the Arabian Sea, bodyguard Raven Stone watched his young charge play soccer on the palace lawn. He noticed a boy of thirteen or fourteen off to the side, watching from the shadows. The boy's skin was much lighter than the other children. Raven wondered if that was what kept the boy away?

Raven readjusted the holstered Glock at his side before walking over to have a word with the young teenager. How many times had Raven felt left out as a boy? Although his adoptive parents and siblings always treated him like one of their own, the stark difference in Raven's skin and hair colour made it impossible to forget he wasn't a real Stone.

"Would you like to play?" Raven asked the boy.

With his eyes averted, the teenager shook his head. The light brown dreadlocks were another stark difference in his appearance from the other boys. "They won't let me."

A wave of indignation fuelled Raven to march onto the makeshift soccer field, disrupting the game. He stood in front of Crown Prince Faris, the twelve-year-old he was hired to protect, and narrowed his eyes.

"That boy over there told me you won't let him play. Why? Because he's obviously not a Jurruan? You think just because he looks different he doesn't deserve to be treated with the same respect you show everyone else?"

Faris glanced over at the boy and shook his head. "That's Nalu. We don't let him play because he cheats and spits when he doesn't get his way."

Raven glanced back at Nalu. "What if I talk to him about playing nice?"

Faris shrugged his shoulders like any twelve-year-old would. "Suit yourself, but it'll be his last chance as far as I'm concerned."

It seemed young Nalu was already labelled a troublemaker. Raven knew what it was like to be fit into an identity at such a young age. "I'll speak to him."

Although Raven's label had changed from wild child to slut as he grew older, the names still hurt and didn't nearly define who he was as a person. Still, it seemed easier for most people to pigeonhole others into categories.

Before he had a chance to get off the field, Nalu turned and began to walk away. Raven started a slow jog. "Wait up."

Nalu eventually stopped and turned to face Raven. "I cannot stay. I have work."

Nalu pointed towards the sea. "A ship is coming. I might be needed to work."

Raven stared at the luxurious yacht pulling into the harbour. "I'm sure whoever it is already has a full staff onboard."

Nalu's big green eyes began to shimmer in the orange glow of the setting sun. "No. They always have something for me to do."

Before Raven could question Nalu further, the teenager took off towards the harbour at a fast run. Raven watched the retreat until Nalu was out of sight before turning back to the ongoing game.

As he began a survey of the surroundings, Raven couldn't get the image of Nalu's watery eyes out of his head. He would have to speak with Ghazi about what kind of work a teenager could pick up on a visiting yacht. His gut told him it wasn"t something Nalu was looking forward to.

Freshly showered, Raven finished dressing and surveyed himself in the mirror. Although he thought it was ridiculous to wear a suit to dinner every night, it was a rare occurrence when a client actually requested his presence at the formal dining table.

The black suit, combined with his dark Native American complexion made his white smile even more dazzling. Raven grinned at himself. "You are one good-looking sonofabitch, Raven Stone."

Raven strode out of the en suite and stopped at the dresser. He extracted the three silver rings he always wore from a shallow dish and placed them comfortably on his fingers, the final ring fitting securely on his right thumb.

After one last adjustment to his expertly knotted necktie, Raven was ready. Every evening Raven dressed to impress, and although he'd attracted the flattering attention of several of the palace staff, he"d yet to gain King Ghazi"s favours. Perhaps he should step up his game?

Ms. Lynne continues her action paced series and this story lives up to the other books with its characters who come to life in a story that doesn't quit to the very end.

...simply fabulous...I want you to know you will absolutely love it...

Share what you thought about To Bed a King and earn reward points.