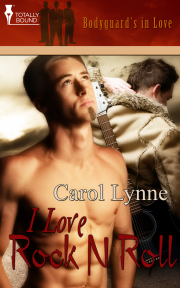 Book 3 in the Bodyguards in Love series

Rock star, Keifer Zane's homosexuality was leaked to the tabloids by 'inside sources'. With the news of his sexual preference came threats and love-sick stalkers. In need of a bodyguard, Keifer's manager hires Archer Adams, a man that is anything but a rock fan.

With his worn leather bag slung over his shoulder, he stepped up to the reception desk. “Archer Brant to see Keifer Zane.”

He hated using a name other than his own, but the public seemed to think they had a right to know who the man was who’d won a spot in Keifer’s bed. So far, Archer Brant had been investigated by every tabloid on the newsstands. He was damn glad the agency had created complete false identities for all their bodyguards.

The young woman at the front desk picked up a phone and spoke quietly to someone. She ended the call and passed a key card to Archer. “PH three. Fit the key card into the provided slot when you enter the elevator.”

“Do you have bags?” the woman asked to Archer’s retreating back.

“Just this one and I think I can handle it,” Archer assured her. No way was he going to tip some shmoe to carry his bag upstairs. He stepped onto the elevator and fit the card in the slot.

Although he’d spoken to Jimmy several times on the phone, he hadn’t seen the rock star for nearly three months. He was supposed to meet up with Jimmy in Philadelphia, but flights had been screwed up to the point it didn’t make sense. After apologising profusely for the mix-up, Archer had agreed to fly to Los Angeles for the next leg of Jimmy’s tour. Shit. I need to remember to use Keifer instead of Jimmy.

The doors opened and Archer carried his bag to room three of the penthouse floor. He grinned and shook his head at the large double door to the suite. He knocked on the door and was surprised when a guy he didn’t know answered.

“Yes I am. And you are?” Archer questioned.

“Of course you are.” Archer pushed inside and glanced around the large living room. Every available surface was taken up with long-haired kids all below the age of thirty in baggy ripped jeans.

One of the guys pointed towards a closed door. “Been in there all day.”

Archer gave the slugs one last glance before striding over to knock on the door.

“I told you to leave me the fuck alone,” Keifer yelled.

Archer took a chance and opened the door, sticking his head inside the room. “It’s Archer.”

The lump in the large bed rolled over and for the first time in months, Keifer smiled at him. “Hey, old man. It’s about time you got here.”

Archer snorted as he tossed his bag to the floor. “Old man? That’s a bold statement for someone only three years younger than I am.”

Keifer put his finger to his lips. “Shhh, I’m only twenty-eight, remember?”

Archer laughed and fell onto one of the large overstuffed chairs. “Yeah and you started in the business when you were only thirteen.”

Archer wondered what it would be like to live a lie in order to appeal to your fans. “So what time do we need to head out?” he asked, throwing his feet up on the end of the bed.

Keifer sat up and scrubbed his hands through his hair.

Getting his first good look at Keifer, Archer’s eyes widened. “Wow. Someone got a haircut.” The last time he’d seen Keifer, the man had long black hair nearly to the middle of his back.

“Yeah. I needed to cut it back home. Mom’s neighbours didn’t feel comfortable with a damn hippy living next door.” Keifer grinned and Archer grinned in return.

Keifer laughed. “You’re the only one. Benny’s been all up in my ass demanding I get some extensions put on.” Keifer winked. “I’ve refused.”

“Good man. He told me to dye the tips of my hair black. My boss told him to fuck off.”

Keifer continued laughing as he stood and stretched. Clad only in a tight pair of white trunks, Archer was forced to look away or suffer the embarrassment of an obvious woody.

“I’d better get in the shower. We need to head to the stadium in thirty minutes.”

Archer nodded, suddenly remembering the men in the other room. “By the way, what’s with the groupies?”

Keifer waved his hand. “Roadies. Benny didn’t want me alone until you got here.”

Keifer shook his head. “I got another letter. I’d have just added it to the stack, but Benny freaked.”

“From now on, I open your mail,” Archer stated in an authoritative tone, hoping Keifer wouldn’t argue with him.

Keifer nodded amicably and walked into the bathroom.

Archer’s job would actually be a lot easier if he didn’t like the guy so much. Keifer was nothing like Archer had imagined. He’d seen the guy on television for years. It seemed Keifer was always in the headlines, either by attending Hollywood parties, rocking out on stage for charity or in news clips.

Ms. Lynne has continued her incredible series with this fast paced and very moving story...I will be waiting for the next installment of the Bodyguards in Love series.

This is a really beautiful story that kept me reading as fast as I could. The chemistry between Archer and Keifer will sear your fingers as you read this book. It just jumps off the page and tugs at...

Share what you thought about I Love Rock n Roll and earn reward points.