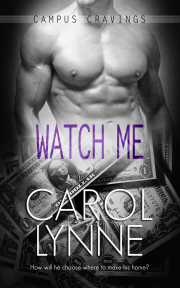 Book 17 in the Campus Cravings series

When you come to the end of a ten year search, what comes next?

As an eight-year-old, Zeke Straus couldn't help his big brother Kade when their father kicked him out, but he vowed to find him no matter what it took. At the age of eighteen, Zeke struck out on his own to fulfil that promise. Now, after ten years of fruitless searching and living in rundown motel rooms, he lands yet another bartender job. The last thing Zeke expects is the attraction he feels for the club's owner.

When Fallon's on Fifth closes after its owner's conviction, Reid Jackson and his best friend Alec Demakis decide to buy the bar and turn it into Clean Slate. When a sexy as sin bartender walks through the door to apply for a position, Reid finds he has several in mind he'd like to try with Zeke.

Kade Straus overcame his past and found the love of his life in partner, Lark. Although he's often thought of the brother he left behind, guilt has kept him from contacting his family for twenty years. When he hears that a Zeke Straus with a matching birthdate was hired to work at a friend's bar, he has little choice but to leave Cattle Valley and come face to face with a past he's never confessed to Lark.

Zeke is torn between his unexpected feelings for Reid and reconnecting with the brother he's devoted his adult life to searching for. He's never found a place he wanted to settle down before, so now that his journey's at an end, how will he choose where to make his home?

Zeke Straus stared up at the neon Clean Slate sign and shook his head. It was a typical gay bar in a typical college town. Unfortunately, he was out of money, again. He glanced at the newspaper in his hand. Finding a job as a bartender had never been a problem for him, thank God. His looks and attitude had always landed him the primo Friday and Saturday night shifts even if the bar already had a regular bartender. Needless to say, he was used to a hostile work environment between him and the rest of the staff.

Zeke never gave a shit if people liked him. The important thing was making as much money in tips as possible so he could move on. He stepped inside the bar and called out. "Hello?"

While he waited for an answer, he studied the place. He took back what he’d thought earlier. The interior of Clean Slate was nothing like the dives he’d worked in previously. Classy was the word that came to mind. "Hello?"

"Just a minute," a deep voice called from the back.

Several minutes later, a gorgeous young blond appeared. He was closely followed by an older, muscular guy, dressed in an old pair of jeans and a white Clean Slate T-shirt. The smile on the blond’s face made Zeke wonder if sex was a condition of employment. Not that he minded. He was used to giving the boss man a taste of what he had to offer. He got a good look at the older man and decided he wouldn’t mind taking him for a ride at all. Fuck, the man was built. He could do without the short grey and black spikey hair that stuck up at odd angles, but everyone needed at least one flaw. Zeke had one testicle that hung a little lower than the other or else he’d be perfect. God didn’t like total perfection, so he always had to give something for people to obsess over.

Zeke waited for the blond to leave before approaching the sexy boss. "I’m here about the bartender position," he announced.

The man looked Zeke up and down. "I’m Reid Jackson, co-owner of Clean Slate."

Zeke shook Reid’s hand. Zeke couldn’t get over the size of Reid’s paw as it swallowed his hand. "Zeke Straus, just a man looking for a job."

Reid grinned. "Well then, let’s see what you’ve got."

Zeke inwardly groaned as he reached for the fly on the best pair of jeans he owned. His zipper was halfway down before Reid held up a hand to stop him. "I’m flattered, but I meant make me a drink," Reid clarified.

With no embarrassment whatsoever, Zeke zipped up. "Okay." He headed around the bar. "What’ll you have?"

"Make me a margarita, a cosmo, a dirty Martini and a Long Island iced tea," Reid instructed.

With practised ease, Zeke set about making the drinks in the order they had been given. "So, I take it from looking around that you aren’t open yet."

Reid sipped the margarita before nodding his head. "It’s good, maybe one of the best I’ve had." He took another sip before answering Zeke’s question. "You’re not from around here, are you?"

Zeke set the cosmopolitan on the bar. "Just rode into town yesterday. Why? Does that matter?"

"This place used to be called Fallon’s on Fifth until the owner fucked up and tried to kill a college kid. It sat dormant for months until after Fallon’s trial. My old college roommate, Alec Demakis, called me up and suggested I come to town and check it out. That was two months ago, and, to finally answer your question, yes, we open tomorrow night." Reid tasted the cosmo. "You’re good."

"Yep," Zeke agreed. While he finished the last drink on the list, he caught Reid staring at him with a furrowed brow. "Is there a problem?"

"You’re small." Reid dragged a hand through his short dark hair. "We’re hoping, with the new name, we won’t have trouble with the locals, but you never know."

Zeke wanted to point out that five-eight wasn’t exactly small, but, comparing himself to the man on the other side of the bar, he guessed he could see why Reid thought it was. "I can hold my own in a fight if that’s what you’re worried about." Hell, he’d fought off drunk bastards for years.

"I’ve already hired two security guys, and I hope to add a few more to the payroll. But, yeah, I guess I’m worried about someone giving you trouble."

Zeke leaned against the bar. "Like I said, I can take care of myself."

Reid was finishing up some paperwork when Alec and Max walked into the office. "Hey," he greeted his old college roommate.

Alec took a seat in the white leather wingback chair and pulled Max into his lap. "Are we ready for tomorrow?"

"I’ve got a few more positions to fill, but we’re good for now." Reid reached across the desk and handed Alec several files. "Those are our newest employees."

Alec started flipping through them one by one.

"Good," Max said, pointing to the file belonging to the blond server Reid had hired. "Jeremy’s in one of my classes. I told him to come down and apply, but I wasn’t sure he would."

"He doesn’t have much experience, but I figured with a face and body like his, most customers will be forgiving until he gets the hang of things." Reid leant back in his chair. "The only one I’m sceptical about is Zeke Straus. He mixes drinks like he was born to it, but I’m afraid he might be a little too sexy for his own good."

Reid shrugged. "I have no idea. He said he just rode into town last night."

"I’ll have to find out," Alec said. "Kade’s a friend who used to live in town. He and his partner moved to Wyoming several years back."

"If he looks anything like Kade, I can only imagine how sexy he is," Max spoke up. He received a sharp slap to his ass and a scowl from Alec. "Not nearly as sexy as you are," Max added.

Each and every book in the series brings something special into the mix of these interesting books...I thought Ms. Lynne did a great job at allowing these characters to continue to grow and develop...

The romance between Zeke and Reid was a happy bump in Zeke's journey that turned into a HEA for both men. She did a fantastic job with this book. I would definitely recommend it...

Share what you thought about Watch Me and earn reward points.