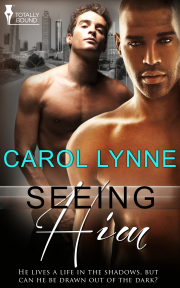 Physical and emotional scars drove Jonah to a life in the shadows, but Trevor is determined to draw him out of the dark and into his arms.

After spending months in a military rehabilitation hospital, Jonah returns from active duty only to find himself homeless. Jonah retreats to life in the shadows to hide his facial scars. He takes up residence in the parking garage of The Melia Hotel where he watches a striking black man come and go from his work inside the hotel. What Jonah doesn't know is that General Manager Trevor Sharp is also watching him.

Trevor spends his days and most of his evenings at the Melia, working hard to prove he is the best man for the job. Unfortunately, between his hours and past heartbreaks, he doesn't have much time for love. When a handsome man comes out of nowhere to save him from an abusive ex, Trevor makes it his mission to find out who the man is.

Trevor eventually builds a friendship with Jonah and works to draw him out of the shadows and into his arms, but will he stay there?

Publisher's Note: This book has previously been released as part of the Unconventional in Atlanta anthology by Totally Bound Publishing.

With the office lights turned off, Trevor Sharp peered out of the window. From his position, he was able to see the broad-shouldered silhouette of the man he’d watched for over a week. He had no idea who the man was or why he slept in a nook of the Meliá parking garage, but there was something about him that continued to draw Trevor’s attention.

Security would have run the man out had they spotted him on their monitors, so evidently the small crevice was one of the few places their cameras didn’t reach. Interesting. Did his mysterious dark friend know he’d be safe in that particular spot or was it pure luck?

It had been a week ago that Trevor’s ex—Dickhead Danny, as Trevor liked to refer to him—had actually shown up at the hotel and waited in the parking garage for Trevor to leave work. Danny had immediately started the same tired argument about why they needed to get back together. When Trevor told Danny he had no desire to see or speak to him, his ex had snapped. Danny wasn’t articulate enough to fight with words—he’d always preferred to use his size and strength to win an argument. Danny had pushed Trevor hard against his car and had showered him with spittle as he’d screamed at him.

Then, from out of nowhere, a man wearing a faded, desert-style fatigue jacket had broadsided Danny, knocking him to the ground. Several punches had been thrown by both men, but it had been Danny who’d eventually run away with his tail between his legs. It had happened so fast, Trevor hadn’t even got a good look at his mysterious protector, but Danny had called the man a freak before he’d run off. When Trevor had tried to approach the man to thank him, the stranger had quickly turned his face away and nodded before disappearing into the shadows.

Instead of driving home that night, Trevor had turned around and gone back into the Meliá. He’d spent each night since sleeping in one of the unused hotel rooms or on the sofa in his office. Although the security at the hotel was a nice bonus, he’d discovered his invisible man only moved around once dark descended on the city of Atlanta.

Trevor sighed. Earlier that evening, he’d taken a to-go box, containing one of the hotel’s big hamburgers, Tater Tots and a bottle of water out to the garage and had left it near where he knew the man slept. He’d set the food in a spot just outside the shadows, hoping to get his first real look at the man he couldn’t stop thinking about.

Unfortunately, his plan hadn’t worked. The invisible man had stayed in the darkness of the nook that he’d made his home and had used his legs to retrieve the to-go that contained the food.

Why’re you hiding? Trevor should probably be afraid of the obviously homeless man instead of feeling a sense of warmth that the man’s proximity provided. He heard someone whistling and glanced over his shoulder. Keith, one of the security guards, was riding down the escalator that led to the Meliá offices.

This story was so tender and caring, that I can’t wait to read it more than once. It showed what sometimes happens to our military personal after the war.

The sex between them is tender an...

If you like stories about scarred men finding their way back into society, if you prefer your books to focus more on the positive than the potential pitfalls, and if you're looking for a sweet, fairl...

Share what you thought about Seeing Him and earn reward points.