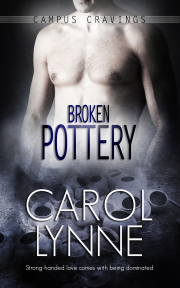 Book 6 in the Campus Cravings series

Professor Daniel Willis is used to being ordered around. A submissive by nature, Daniel needs the strong-handed love and guidance that comes with being dominated. When he gets involved with an abusive dominant he sees no way out.

Tony Bianchi is a dominant in the boardroom, but never considered taking it to the bedroom. After their first meeting Tony knew he wanted Daniel, black-eye and all. Protective of those he holds dear, he isn't about to let anyone hurt Daniel again, even if it means taking on an abuser with a badge.

As Tony Bianchi sat in on yet another business meeting his mind began to wander to Daniel Willis. He looked at his watch again. It was another three hours before he could pick Daniel up at the hospital and take him home.

Every evening for the past two weeks, Tony had spent sitting beside the small beaten man’s hospital bed, trying in vain to get him to open up. Daniel still wouldn’t tell Tony who had handcuffed him and beaten him senseless.

Thinking back, Tony remembered that day like it was only yesterday. He’d left Charlie Salinger’s ‘welcome to town’ party and gone to Daniel’s to make sure he was okay.

Pulling up in front of the apartment building, Tony looked around, finally spotting Daniels bright red Volkswagen Bug. Knowing he was home, Tony got out of his sedan and entered the small apartment building. Looking at the mailboxes right inside the door he determined D. Willis lived in 3C. Deciding to take the stairs, Tony made it up the three flights in no time. Finding Daniel’s apartment, he knocked several times. When no one answered, he tried the knob, surprised to find it unlocked.

“Daniel? It’s Tony Bianchi, Rocco’s friend.” He entered the apartment slowly, noticing the tipped over coffee table. The black hair on the back of his neck stood and he headed straight for what he assumed was either the bathroom or the bedroom.

“Daniel?” Tony gave a soft knock on the door as he opened it. Tony’s breath froze in his chest at the sight before him. Spread-eagle, handcuffed to the bed, a naked Daniel laid bloody and lifeless. Swallowing the bile in his throat, Tony walked closer to feel for a pulse. When he was rewarded with a weak but steady beat, he pulled out his cell phone and called the police.

Frantically looking around the room for the key to release the unconscious man from his shackles, Tony panicked. “Shit, where is it?” he questioned aloud.

He started to leave the room when he heard a gurgling noise coming from Daniel. Tony sprinted back over and knelt beside the bed. “Daniel? Did you say something?” He watched as Daniel’s body stiffened slightly. “It’s Tony, Rocco’s friend.”

Opening one eye enough to see through his lashes, Daniel spoke again. “Key.”

Tony’s eyes went wide. “Fuck,” he said, unable to believe what he’d heard. Before reaching under Daniel, Tony needed to make sure. “Are you saying the key is in your cock?”

Daniel gave him a slight nod. Taking a deep breath, Tony reached under Daniel, wincing at the hot skin and sticky substance he encountered. No doubt Daniel’s front looked as bad as his back. Unsure of where exactly he was hurt, Tony tried not to touch Daniel’s skin any more than he had to. After brushing a finger against Daniel’s cock, Tony swallowed and quickly found the head. Shoved into the slit on the crown of Daniel’s cock was the key to the handcuffs. With not enough metal to grab hold of, Tony looked back up at Daniel’s closed eyes. “I’m sorry, I need to...”

A grunt of consent sounded from Daniel as Tony put both hands on the bleeding man’s cock. A few milking gestures, and the key protruded from the head. Using his other hand, Tony grabbed the metal and slowly pulled the key out. Exhaling, Tony unlocked the cuffs as the police entered the room.

“Don’t touch him,” the first officer warned, hand on his service revolver. “Step away from the victim.”

5 out of 5! Ms. Lynne has once again created a beautiful love story based around men who have real life problems that pertain to today's social climate.

4.5! BROKEN POTTERY is the sixth book in the Campus Cravings series by Carol Lynne and it is my favorite. I highly recommend this story.

Share what you thought about Broken Pottery and earn reward points.