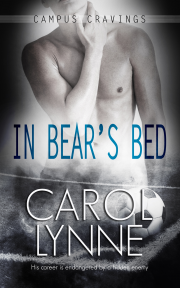 Book 7 in the Campus Cravings series

Coming out of the closet is never easy, but if you're a 6'5, 290 lb All-American football player, it's even harder. Nate “Bear” Tucker has dealt with his homosexuality by protecting others. No one has ever tempted him to “come out” and jeopardise his promising football career. That is until he meets Liam.

Soccer player, Liam O'Brien is in dire need of a guardian angel, and Bear is more than happy to protect the cute sophomore. The problem is the more time Bear spends with Liam the smaller the closet becomes.

Even more, with the start of a new year and new life, Bear's football career is endangered by a hidden enemy. This time he'll need Liam to protect him…from himself.

“Hey, Bobby, have you seen Coach Billings?” Liam asked, sticking his head into the weight room. There were a couple of players working out, with Rudy right in the centre, laughing and telling off-colour jokes. From the looks of the sweaty towels draped over every machine, Liam thought maybe Rudy had better things to do. Rudy gave a fluttery wave, but Liam chose to ignore the worst trainer who’d ever lived.

“I think he’s in the equipment room,” Bobby replied.

Before Liam could turn around, Rudy piped up behind him. “How’s life in Fairy Land?”

Rolling his eyes, Liam continued down the hall to find Aaron. “Hey, Coach?” Liam knocked on the equipment room door and waited for a response.

“Come on in,” Aaron Billings yelled through the closed door.

Stepping inside the small room, Liam looked around. “Everything set for practice later?”

Aaron put down his clipboard and turned to face Liam. “I guess, although Rudy did a piss poor job of checking this stuff in last season.”

“Don’t get me started on Rudy. He just asked how life is in Fairy Land.” Liam shook his head. Damn he hated that homophobe.

“Sounds like Rudy needs another session with Charlie Salinger. I’ll talk to Charlie about it, or maybe you could ask him to call me when you get back to the dorm?”

“I was just over at the football offices looking for Julian. Someone told me he was out of town, and I wondered if you knew when he’d be back?”

A concerned look crossed Aaron’s face. “He’s in California on a personal matter, but he and Koby should be driving back sometime this weekend. Why? Is something wrong?” Aaron looked down at Liam’s leg.

Having injured his hamstring last season, Julian was the trainer who’d gotten Liam playing again. It was too bad Julian worked for the football team instead of the soccer team. Julian said he didn’t mind working with Liam, so he’d taken advantage of the offer when he needed it.

“No,” Liam admitted. “I wanted to go over a few exercises with him before he gets too busy with the football players. No big deal. I’ll catch him when he gets back.”

“Okay.” Aaron looked at Liam for a few seconds. “So how are things going at BK House?”

“Good. It’s just been me and Charlie so far, but more of the guys should be moving in over the weekend.” Liam ran his hands through his shaggy black hair. “I hate to admit it, but I’ll be glad when the dorm fills up. Charlie’s nice, but I miss having people my own age to talk to.”

Aaron’s head tilted a little to the side. “What about Rocco and Koby? I thought they were becoming friends.”

“Oh they are.” Liam was quick to correct his error. “They’ve both been busy over the summer, and I’ve had way too much free time on my hands. I’m sure it’ll change once school starts up again.”

“Would you like to go out to dinner with me and Demitri later? Nothing fancy. We thought we’d swing by McGilley’s. It's steak night which means most of the gang will be there as well.” Liam wanted to go, but he didn’t want to leave Charlie at the house by himself. “I’ll have to call Charlie. He’s been making dinner for the two of us lately.”

“Invite him along. Hell, it’s a pub, the more the merrier. Remember though, you may be twenty-one, but you’re still in training.” Aaron gave Liam a wink.

“I don’t drink. I’ve never seen the point. I use my money for the finer things in life...like food,” Liam said laughing.

“Okay, well, call Charlie. If you want a ride, I’ll be leaving around five-thirty.”

Charlie was free for dinner, so Liam opted to ride the bus with him. Liam was looking out the window as the bus slowly moved through town. “Too bad one of us doesn’t have a car,” he said without thinking.

Laughing, Charlie slapped Liam’s thigh. “If I could find a seeing-eye-dog that could drive then I’d buy me one.”

Liam was mortified at what he’d said. “I’m so sorry. I wasn’t thinking about...well, you know.”

“The fact that I’m blind?” Charlie asked. A smile lit up his face. “Good.”

Feeling a little better, Liam went back to looking out the window. Ten minutes later, the bus pulled up to their stop. Charlie didn’t even have to be prompted. He seemed to automatically know where he was. Liam was amazed by Charlie’s abilities every time they were together.

Liam shook his head as he exited the bus. He was pretty pathetic, a young guy with no real friends. He’d thought Bear was his friend, but that was before he’d pulled back and virtually cut off all ties the previous spring. Liam still didn’t understand what he’d done to offend Bear.

The whole thing had hurt a lot more than he’d let on to anyone. He didn’t make a habit of crushing on straight guys, but the longer he was around Bear, the more feelings he developed. Maybe Bear had picked up on his feelings? Could that be the reason he’d stopped talking to him?

Glancing at Charlie, Liam was surprised to find they were in front of McGilley’s. “How do you do that? I wasn’t even paying attention. Hell, we could’ve walked right by and I wouldn’t have known.”

Shrugging, Charlie led the way to the door. “I’ve been here several times, and I’d know the smell of steak and beer anywhere.” Charlie opened the door before turning back and smiling at Liam.

He thought Charlie had the prettiest eyes. They weren’t really green, but they weren’t brown either. Liam took a whiff as they entered the pub, smelled like any other bar to him. He immediately spotted a large table surrounded by people he knew. Aaron stood up and waved. Nodding his head, Liam helped steer Charlie around the packed pub to the table.

Everyone at the table greeted them as they both found empty chairs. His was at the end of the table, and Demitri instructed Charlie to the other available seat.

Tony Bianchi stood and gestured to the good-looking man sitting next to him. “I’d like to introduce the two of you to my friend and newest vice-President, Jace Rawlings. Jace, this is Liam O’Brien and Charlie Salinger.”

Too far away to shake, Liam spoke instead. “It’s nice to meet you, Jace.”

Liam watched Charlie as his gaze appeared to land right on Jace. “Good to meet you. I’m new in town as well,” Charlie said.

“Really? Where did you move here from?” Jace asked, trying to strike up a conversation. Liam could tell Jace had no idea that Charlie was blind, and it appeared no one at the table was going to offer the information.

“New York City. I got a call from Demitri asking if I’d be interested in heading up a Diversity Tolerance Program for the college. I’m also the director of students at BK House.”

Jace nodded and turned towards Tony. “That’s the program you were telling me about earlier.”

“Yeah,” Tony said. “Charlie’s been here over the summer giving training seminars to faculty and staff at the university.”

“Sounds like a great program. It’s good to meet you, Charlie.”

“Thanks,” Charlie said as a waitress came to get their drink orders.

5 out of 5! Ms. Lynne has once again added a new twist to her compelling Campus Cravings series.It is a fascinating idea to have a dorm for them as a safe haven, and it is a great idea. I will be waiting...

This series just keeps on giving. Carol Lynne brings these characters to life right off of my computer screen with great charcters, excellent story lines and I find myself falling for each and every...

Share what you thought about In Bear's Bed and earn reward points.