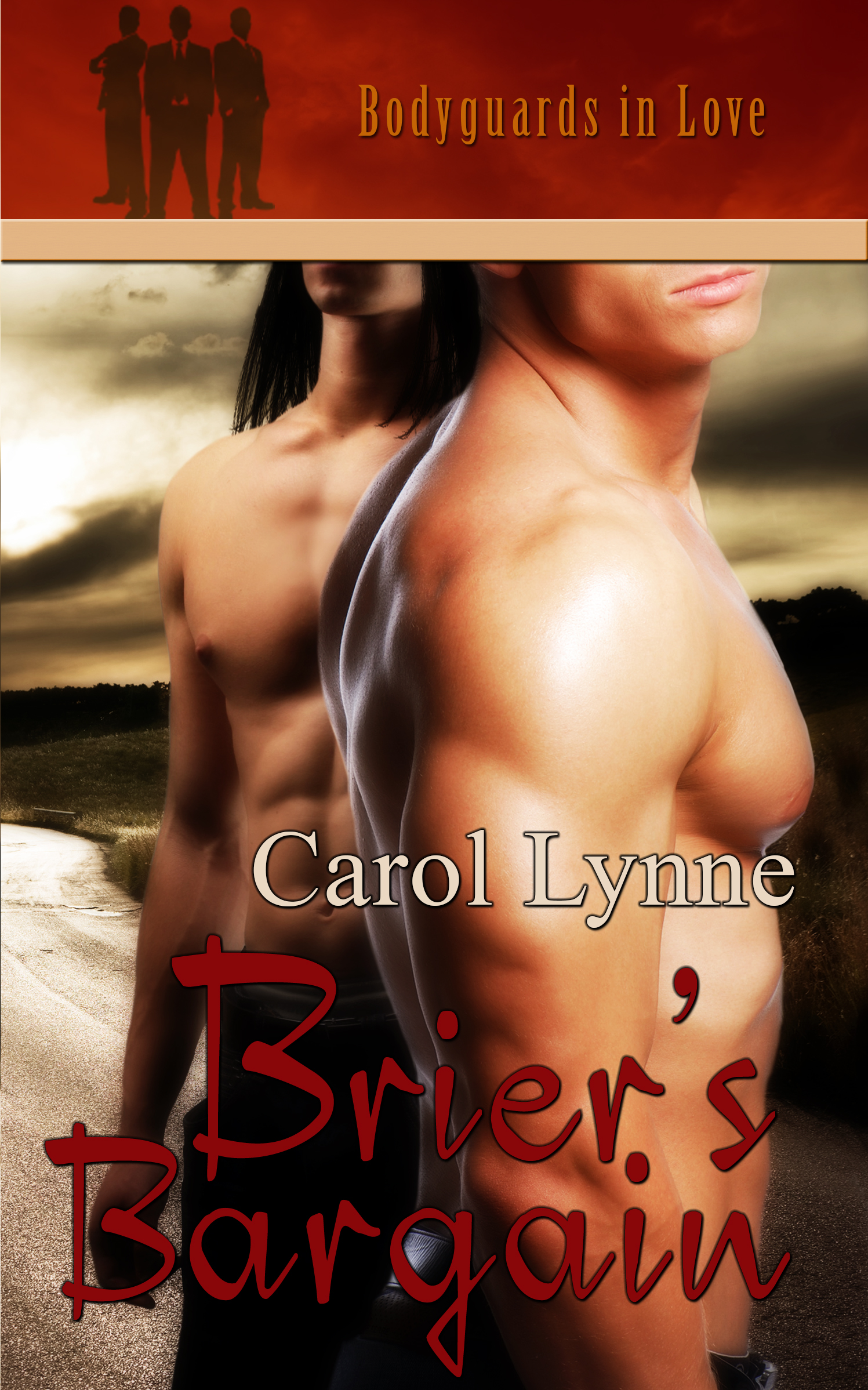 Book 1 in the Bodyguards in Love series

"…DEFG…" Brier placed the last file in the appropriate spot and closed the drawer. "Do you have anything else for me to do, Sheila?"

"No, sweetie, you're all done. Why don't you see if Bram is ready to call it a day?" the accounting office secretary said with a smile.

"Okay. See you Monday." Brier picked up his coat and started to leave, but Sheila called him back.

"Brier? You forgot your paycheque."

Smiling, Brier turned and picked his cheque up from the table where he'd laid it earlier. "I'm gonna need this, too."

"The carnival's in town. Bram and Declan promised to take me."

"I will." With one last grin, Brier went to find his twin brother. Since being released from the psychiatric hospital nearly three years ago, Brier had worked and lived with Bram and his partner Declan.

He knew Bram was taking him to the carnival to help get his mind off of Jackie. Brier stopped walking and rubbed his eyes. Thinking about the only man he'd ever truly been in love with still made his chest hurt. Jackie had said he loved Brier too, but then Jackie had gone away to some foreign country and left him all alone.

Brier knew it was Jackie's job to go train bodyguards for Three Partner's Protection Agency, the company they all worked for, but it didn't make it any easier to be alone. He waved hi to Mac as he passed his office on the way to Bram's.

He poked his head in and smiled. "You almost finished?"

Bram looked up from his computer, those little tiny reading glasses perched on the end of his nose that Brier thought made his brother look so smart. "Yep. Just give me another ten minutes or so."

"Okay. I"m gonna see if Mac's going to the carnival."

Bram nodded and went back to his computer. Brier travelled back down the hall to Mac's office. He leaned against the doorjamb and waited for Mac to notice him.

"Good. I got everything filed that Sheila asked me to, and I finished painting the break-room."

"I know. The break-room looks terrific. I'm glad you suggested we go with the yellow. It really livens it up."

Brier felt a blush creep up his cheeks. Mac always said nice things to him, but it was still hard for Brier to take a compliment without getting embarrassed. "Are you going to the carnival?"

Mac smiled and leaned back in his chair. "No, I think we'll skip it this year. You?"

"Yeah. Bram and Declan are taking me." Brier held up his paycheque. "Except I'm paying for myself."

Brier tapped his foot on the leg of the desk. He wanted to ask a question, but didn't want Mac to get mad at him.

Brier shook his head. "I was just wondering if you'd talked to Jackie? He hasn't called me for a while."

Mac looked uneasy for a moment before his attention shifted to the door. Brier looked over his shoulder at Bram. "You ready?" Bram asked.

"Yeah. I was just asking Mac if he'd talked to Jackie."

Bram took a deep breath. "I imagine Jackie's too busy to call anyone these days. Don't take it personally, brother."

Brier stood and stuffed his cheque back into his coat pocket. He had a feeling something was going on. For several days he'd caught Bram whispering to Declan. A couple of times Brier thought he heard Jackie's name, but when he questioned Bram, his brother always denied it. Maybe Jackie wasn"t coming home. What if he fell in love with someone else and didn't want Brier anymore?

He felt that throbbing thing start in his head again. Brier lifted his hand to the thick scar on the side of his skull to rub away the pain, but it didn't help. The scar his father had given to him as a baby was a constant reminder that he'd never be as smart as his twin brother. How a father could abuse an infant and then just sign over custody to the state when that abuse had permanent repercussions, Brier still didn't understand. At least he was happy his father had been convicted after abuse led to the paralysis of his younger brother Thor. Brier didn't feel a bit sorry that his father had been murdered in prison. He began to rub harder at the raised scar that ran in a large arc above his right ear.

"You okay?" Bram asked, stepping into the office.

"Did you take your medicine?"

Brier hated it when Bram tried to baby him. He wasn't a baby. "Yes. It just hurts sometimes when I get upset." He pushed past Bram to the hall. "See you Monday, Mac. If you talk to Jackie, tell him I said hi."

Bram stayed in Mac's office for a few more minutes. Brier decided not to wait on him and went out to stand by Bram's car. It was hot outside, so Brier took off his jacket. He thought it was weird how the mornings could be cold, but then the afternoons would get so hot.

Bram finally came out of the building and unlocked the doors. "I guess I should've given you the keys. You could've started the air conditioning."

Brier didn't say much. He got in and fastened his seat belt before leaning his head against the window. The hot glass felt good as it rubbed on the scar. "Are we going to eat at the carnival?"

"Whatever you want. This is your night." Bram pulled out of the parking lot and headed for home.

Brier turned to his brother. Bram had been very patient with him since Jackie left. He hated that he'd had the meltdown while staying at the Triple Spur. Ever since that night, Bram had treated him differently. The way he'd been treated when he'd first been released from the psychiatric hospital in Oklahoma.

The hospital reminded him of Carl, Jimmy and Rick, the men who'd sexually abused him in the hospital. Bram had told him that Carl and Jimmy were in a little trouble, but they wouldn't be going to jail, and the police hadn't found Rick yet. He'd moved away. "Have you heard anything about Rick?"

Bram got a surprised look on his face. "What brought that up?"

"The police haven't located Rick yet, but when they do, they want to put him in jail."

"Because of what he's done to several men in the hospitals he's worked in." Bram shifted in his seat, and didn't look at Brier anymore. "They want you to testify, but I told them no."

"I don't think you're up to sitting in a courtroom with Rick, telling everyone in the room about the things he did to you."

Brier pressed his scar harder against the glass. "I don't wanna see him. He's scary."

Bram nodded and reached over to squeeze Brier's hand. "I know, buddy. That's why I told the police they'd have to find another way to convict him." Brier felt better. At least Rick couldn't get to him if he didn't see him. Rick used to tell him he'd kill him if he ever told. Brier knew he'd do it to. Rick was a bad, bad man.

"I have money to buy us all corndogs for supper," he said, trying to change the subject.

"Are you sure that's what you want to do with your paycheque? I can buy my own dinner."

"You buy me dinner all the time."

Carol Lynne starts the new Bodyguards in Love series with a bang...I found this story a joy to read and look forward to the next installment in this series.

Share what you thought about Brier's Bargain and earn reward points.