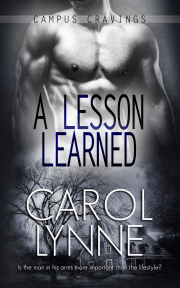 Book 14 in the Campus Cravings series

Graduate student, Dane Jefferson, believes the sun rises with Magnus Sofokleous. He would do anything for the chance to get closer to the sexy professor. Unfortunately, Magnus is so busy researching the past, he doesn't take the time to live in the present.

One week before winter break, Magnus gratefully accepts a grant to further his research at Barrett House, a small plantation in Louisiana. With extenuating circumstances surrounding the grant, Magnus is forced to ask his assistant, Dane, to accompany him. Although Dane is qualified, the attraction Magnus feels for the younger man makes him uncomfortable.

Away from the rigors of academia, Magnus lets down his guard and quickly becomes sexually involved with Dane. In the past, Magnus used domination to protect himself against the weakness of love. When Dane doesn't accept the Dominate/submissive relationship Magnus has used as a shield for years, he is forced to decide which is more important, the lifestyle or the man in his arms.

Reader Advisory: This story is best read in order of sequence as part of a series.

Dane Jefferson stared at the sheet of paper in front of him and chewed the skin around his thumbnail. For two hours he’d contemplated his actions and wasn’t any closer to reaching a decision.

Giving up, he reached for the phone. Although he was glad his best friend had finally agreed to move in with Chet, Dane missed having Bobby in the house.

"Just studying, but I could use a break. What’s up?"

"Well, you know I need more hours of field experience..." Dane trailed off.

"How wrong would it be if I sponsored something on my own but didn’t tell Professor Sofokleous the grant was coming from me?"

"What’re you up to, Dane?" Bobby asked, his voice thick with suspicion.

"I’m sitting here with a grant request form in my hands from Professor Sofokleous."

"No, he sent it to the James D Barrett Preservation and Historical Research Institute."

"So why do you have it?" Bobby asked.

"Because James Barrett was my fourth great-grandfather on my mother’s side. It’s because of him that I became interested in anthropology in the first place. After I found and read Professor Sofokleous’ book, I knew I had to study under him. Anyway, Mom gave me the request at Thanksgiving. She said it was something I’d be better suited to decide."

"So what’s your dilemma?"

"Professor Sofokleous doesn’t know I’m connected to the institute, and since I want to be the one to accompany him on the research project, I’d probably have to tell him. But will that make him even more uncomfortable around me than he already is?" Dane sighed. "I don’t know what to do."

"How does the grant application look? Is it something you would approve even if you didn’t want to sleep with him?"

"I honestly don’t know. He’s not asking for much money, but he wants to stay at Barrett House, something to do with getting answers to an unsolved mystery." Although letting visiting researchers stay at the house wasn’t unheard of, Dane was uneasy. What mystery could possibly surround Barrett House? His ancestors had never owned slaves, so it had to be something involving Native Americans, Professor Sofokleous’ area of study.

I enjoyed this book and would recommend it to anyone as a good book to curl up with and enjoy.

A Lesson Learned by Carol Lynne is just another example of her wonderful skill...It was heartfelt and teaches us all the importance of how much knowledge is too much and when to just let go.

Share what you thought about A Lesson Learned and earn reward points.