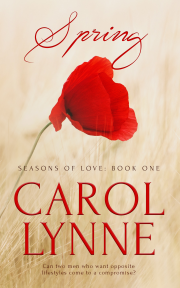 Book 1 in the Seasons of Love series

In the spring of their relationship, Sidney and Nash strike out on their life journey and, like everything fresh and new, optimism reigns. 'Spring' is an emotional roller coaster, but it is also a ten...

Share what you thought about Spring and earn reward points.