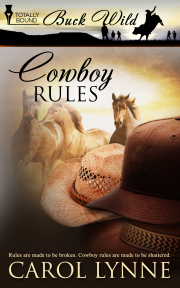 Book 2 in the Buck Wild series

Although ex-con, Cash Wiley, loves working at the Rocking W, being around Shane Ackerman and Dub Walker is the favorite part of his job. He’d had the chance to be with the two men a few months earlier, but he’d blown it before it could happen. He’d ruined everything because he’d refused to have sex without strings attached.

Stupid didn’t begin to define how he’d felt the following day or every day afterward. Shane took his breath away and Dub was the kind of man Cash had always dreamed of having at his side. It was the rule that stood in his way.

How could he promise to not fall in love when he already had?

Cash Wiley watched Shane Ackerman carefully. He was fascinated by the way Shane manhandled the horse’s hoof. For a little guy, Shane definitely managed to show Gravy who was boss.

“Just hold it like this,” Shane instructed, “and scrape all the mud and rocks out. You don’t have to worry about hurting the horse unless you get careless and try to go too deep. The important thing to remember is that you’re doing the horse a favour.” He glanced up at Cash. “If the horse starts to fight you, give him a shoulder to the stomach, and he’ll settle down.”

Cash hated horses. Growing up in Flint, Michigan, he’d spent his childhood trying to survive. Spending time with horses or any animals other than dogs, cats or rats, wasn’t an option. It wasn’t until he’d arrived at the Rocking W that he’d even stood next to a horse. He’d had no idea the damn beasts were so big.

Shane released Gravy’s foot and stepped back. “You want to try?”

No, Cash wanted to scream. But, he loved his job on the ranch and with his past still following him around, jobs were few and far between. He enjoyed the one he had now more than anything that had come before. “Sure”

When Shane tried to get out of Cash’s way, they had a moment of this way or that. “Sorry,” Shane said, eventually getting out of Cash’s path.

Cash waved away Shane’s apology. Although he really enjoyed being around Shane, their time together was too easy. He had to remind himself Shane was already taken by Dub, the owner of the Rocking W. Even harder to deal with, Dub had invited Cash to join them in a threesome. He would have jumped at the chance to spend quality time with Dub and Shane between the sheets, but there was something about the pair that spoke to Cash on a level deeper than sex. He knew once he’d been intimate with Shane and Dub, he wouldn’t be able to walk away without getting hurt. No thanks.

“Now just put your hand on Gravy to let him know where you are and that you have no intention of hurting him.” Shane stood nearby.

Cash swallowed around the lump of fear lodged in his throat. It was stupid to be afraid of the horse. He’d seen Dub and Shane manhandle Gravy without retaliation, but Cash couldn’t get beyond the powerful muscles evident in the horse’s legs.

Although Cash didn’t trust Gravy, he trusted Shane. He laid his shaking hand on the horse’s back. Done. He released the breath he’d been holding.

“Great. Now run your hand down his leg and tap once you get toward the hoof.”

“Yeah. It’ll send Gravy a signal as to what you want. Don’t worry. He’s used to it.” Shane squatted, resting his forearms on his knees.

Cash tried to do as instructed, but nothing happened. “Should I hit him harder?”

Shane shook his head. “He knows what you want. He’s just fuckin’ with you. Move on down to his fetlock and give him a squeeze.” He pointed to the area near Gravy’s hoof.

When Cash did as he was told, Gravy snorted and danced to the side. The action scared the shit out of Cash. He jumped back out of the horse’s reach. “Sorry, Shane, but I don’t think I can do this.”

Shane moved forward to stand in front of Gravy. He slapped the horse on the nose, hard enough to get Gravy’s attention. “Shame on you for scaring Cash. He was trying to help you.” He turned back to Cash. “I’m sorry. I don’t know what’s gotten into him.”

Cash shrugged. “It’s not the horse. Animals don’t like me.”

“That’s a lie. Patches loves you.”

Cash grinned when he thought of the calico ball of fur that slept with him each night. It was the first time in his life he’d had something he considered special. “Yeah, but Patches thinks she’s human. I haven’t told her she’s a cat, so don’t you go and spill the truth to her.”

Shane held up his right hand. “The secret’s safe with me.”

I found this book very well written. I had a hard time putting this book down. The main characters and the secondary characters were very realistic and appealing. Overall, this was a g...

Share what you thought about Cowboy Rules and earn reward points.