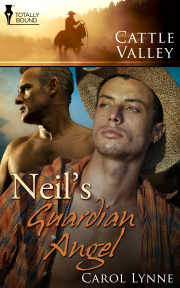 Book 17 in the Cattle Valley series

After a fall from his horse leaves Neil Peters in need of around-the-clock care, he is forced to face a past he doesn't even remember. Ben Waters, the man constantly at his beside, doesn't even look familiar. So why does Neil feel there's more to the story when Ben introduces himself as Neil's legal guardian?

Ben's inappropriate feelings towards his ward once forced him to send Neil away. Now, Neil once again threatens Ben's control. Ben tries to push aside his desires as he helps Neil but they won't be shoved away this time. And soon he learns, reaching out to the man he still loves is the only way for both of them to come to terms with their pasts and their future.

Ben Waters finished the rest of his cardboard flavoured sandwich and sipped at yet another cup of coffee. The hospital cafeteria had become almost like a second home to him. It had been ten days since he’d received the late night phone call from Leo Burkowski informing him that his ward, Neil Peters, had been seriously injured in a fall from his horse. Serious, as it turned out, had been an understatement.

For days, Neil slipped in and out of consciousness. Now that he was finally awake, Neil was experiencing a good deal of amnesia. He seemed to remember his friend Leo and Leo’s partner Sammy, as well as the other folks from Cattle Valley that came to see him, but he didn’t remember Ben or his life before he moved to the small Wyoming town.

Worse, Neil’s physical mobility had been compromised by the severe blow to the head. The doctors hoped, with therapy, Neil would regain the use of his hands and his left leg, but so far the young man Ben had always known was practically helpless.

A hand landed on his shoulder, startling him out of his thoughts. He glanced up and smiled at Leo. “You scared me.”

“Sorry about that.” Leo set a fresh cup of coffee in front of Ben and took the chair across from him.

“I stopped into the room, but Neil’s napping. I figured I’d find you down here,” Leo said.

Ben nodded. “Thought I might as well grab something to eat while he slept.”

Leo traced the design on the outside of his cup with his finger. “Any change?”

“And I suppose you still haven’t told him who you really are.”

“He knows I’m his legal guardian, but he still doesn’t remember me,” Ben admitted.

“Don’t you think you should tell him the rest?”

“The rest? What, like how I kicked him out of my life after he told me he loved me?” Ben shook his head. “If there’s a reason he doesn’t remember me, I figure that’s it.”

“You should tell him you love him.”

Ben finished off his original cup of coffee before pouring two packets of sugar into the one Leo had given him. “What good would that do? Maybe it’s better he doesn’t remember. I know how much I hurt him by pushing him away.”

Ben shook his head. “I know what Neil thought, but the age issue was only a small part of it.”

“Was it because you were his guardian?”

“Partly. I had my reasons. Things I won’t discuss.”

Leo nodded. “From what little he’s told me, I gather things were pretty damn bad at home.”

“You can’t even imagine what that boy went through. In the beginning, it seemed I called the cops at least once a week. They never seemed to do much.” Ben cleared his throat. “Did Neil tell you his mom was a dispatcher for the police department?”

Leo shook his head. “He never mentioned it.”

“Well, she had everyone fooled, including the Department of Social Services. It got to the point she threatened to move away. In my heart, I knew that I couldn’t let that happen. At least with Neil living next door, I was able to protect him as much as possible.”

“Not all. I found out after his mother’s death, beating him wasn’t all the woman’s boyfriends enjoyed doing to Neil.” Ben swallowed around the bile rising in his throat. “I knew Neil seemed to be unnaturally interested in learning about gay sex. I mistakenly chalked it up to him being curious about my open homosexuality. He never gave any indication he’d been violated, but I should’ve seen it. I should’ve known.”

“Bullshit. Now you’re being too hard on yourself.”

“I’ll never be as hard on myself as I deserve. Pushing Neil away seemed like the right thing to do at the time. Part of me was afraid I’d fallen in love with him for the wrong reasons as well. It wasn’t until after he left, and I didn’t hear from him, that I realised I loved him more than I’d ever loved anyone.”

Ben sighed and stood. “I need to get back up there. Neil may not remember me, but he’s gotten used to having me around. Once again, I’m like an old, ratty security blanket to him.”

Leo stood and clapped Ben on the back. “I have a pretty good idea that in his heart, he remembers exactly who you are. It just might take his mind a little more time to catch up.”

A recommended read! Carol Lynne stories get better with each one I read and Neil's Guardian Angel is a wonderful continuation of the Cattle Valley series. If you love older men with younger men...

Ms. Lynne has continued her incredible series with this moving and inspiring story...It was beautiful to watch the people of Cattle Valley as they come together as a community to love and support each...

Share what you thought about Neil's Guardian Angel and earn reward points.