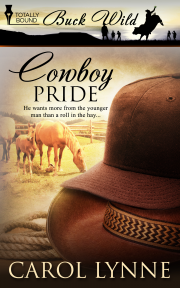 Book 1 in the Buck Wild series

As owner of the Rocking W, Dub Walker’s job is to make sure his cowboys keep their minds on their jobs and not the hot rough stock riders who come to the ranch to train. It hasn’t always been easy for Dub to resist the sweet young things, but he’s been doing less prowling since realising there’s only one man on the ranch for him.

For years, Shane Ackerman has tried to prove to Dub that they’re right for each other. Unfortunately, the man Shane loves and worships pushes him away at every turn. Instead of wallowing in self-pity, Shane does what any twenty-something man would do—has sex, lots of it.

Dub could easily take Shane to his bed, but he wants more from the younger man than a roll in the hay. With temptation around the ranch seven days a week, Dub knows monogamy will be a problem for both of them. With the help of a friend and a bit of soul searching, Dub discovers the only people qualified to define a relationship are those in it.

Terrance Walker, better known as Dub, glanced up from his breakfast plate as his younger brother, Trent, shuffled into the kitchen. “You look like hell.”

Trent grinned and gathered the front of his hair into a ponytail. “Long night, but it was worth it. You should try it once in a while.”

Dub sopped up the egg yolk with the corner of his toast. Trent was a whore who’d bed anything with two legs, be it man or woman. It wasn’t the fucking that bothered Dub, but Trent’s drinking was becoming a problem. “You need to lay off the booze.”

“Yeah. Thanks, sweetheart.” Trent flashed Gracie the smile that had gotten him out of trouble his entire life. Few people around Buckhead County had been able to resist that damn smile over the years.

Gracie set a large cup of strong black coffee in front of Trent along with a small plate of buttered toast. She went back to the counter and started fixing her famous hangover cure, a staple in the Walker house.

“Sorry.” Trent winked at Dub. “Mrs Jefferson gave me a basket of apples last night. I thought maybe you could make Dub one of those crisps he likes so much.”

Dub inwardly groaned. Sandy Jefferson was the wife of their nearest neighbor and one of Trent’s favorite fuck buddies when her husband was out of town. Dub had told his brother on more than one occasion he was playing with fire. Brian Jefferson was twice the size of Trent, which was saying something. All the Walker men were tall with well-muscled upper bodies. “I take it Brian went to that cattle auction after all.”

Trent polished off his toast and reached for the brownish-red liquid Gracie passed to him in a large glass. “Yeah, but only overnight. He’ll be back sometime this morning.” He tipped the glass and drained the entire thing in one long gulp.

Dub watched his brother for another moment before getting to his feet. After years of trying to push morals on Trent, Dub had eventually given up. Although they both had their father’s build, they had unfortunately received their mother’s looks and in Trent’s case, her values, which wasn’t saying much for either of them. It was Trent’s light brown eyes combined with his Mexican coloring that lured lovers in.

That said, Dub needed Trent to concentrate on the ranch. “We’ve got those new students in this morning, don’t forget.”

Gracie took Trent’s empty glass. “You’d best behave or Mr Jefferson will ask me to slip some arsenic in it next time.”

“What Brian doesn’t know won’t hurt him. Besides, Sandy’s way too much woman for a man like Brian to handle. I’m doing him a favor.” Trent stood and kissed Gracie on the cheek. “See ya at lunch. I’ll put those apples on the porch.” He grabbed his baseball hat off the peg beside the door. “Later, bro.”

Dub carried his plate to the sink. “Fine breakfast.” He kissed Gracie on the cheek, something he’d done every morning for over twenty years.

“He’ll grow up someday,” she said, nodding toward the closing door.

“He’s twenty-four. At what point is that miracle going to happen?” Dub lifted his battered brown Stetson from the table and settled it low on his forehead. He knew Gracie had always babied Trent, just as his father had, but enough was enough. In the beginning, even Dub had blamed Trent’s bad behavior on their mother, Marcella, walking out on them when Trent was barely seven, but that was a long time ago. The decisions Trent made were reckless, and Dub had no doubt the lifestyle would catch up to him eventually.

“No matter what kind of trouble he finds at night, Trent always puts in a full day’s work.”

Dub glanced at Gracie. Some things, he reckoned, would never change. “I won’t be in for lunch.”

“I figured as much,” Gracie replied, knowing Dub always ate with the new students on the first day of roughstock training.

This book captured me from page one and by the end I was desperate for book two. The characters are engaging, there is drama and sexy cowboys. I love that the main characters Shane and Dub had to decide...

A new western series by Carol Lynne is off to a promising start with "Cowboy Pride." The adventures on the Rocking W ranch are well set up to begin with the established relationship of Dub and Shane. As...

Share what you thought about Cowboy Pride and earn reward points.

Cowboy Pride has been nominated for Best Book of 2014!