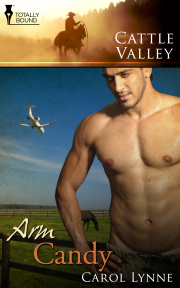 Book 14 in the Cattle Valley series

Asa Montgomery is a hard man to figure out. He's got millions of dollars in the bank, a host of men vying for his bed and he's still miserable.

When a tragedy leaves him broken and battered, Asa quickly finds out who his real friends are. Left alone with only his household staff to nurse him back to health, Asa realizes he wants more than just a pretty man to adorn his bedroom.

Despite Mario's growing attraction to Asa, he'll be damned if he'll allow himself to be another man's arm candy.

When Asa sets out to change Mario's mind, he'll discover it takes more than money to gain the heart of the ex-Army Ranger.

Mario Benta was wiping down the exercise bikes when Rio returned from a long lunch. The grin on the big man’s face said it all.

Mario tossed the rag over his shoulder and neared the juice counter. “Nate still talking to that architect fella about designing a new arena?”

Rio finished chugging a glass of apple juice before smacking his lips. “Yeah. The big argument now is who’s going to pay for it. Nate’s insisting on using his own money, but Ryan and I are trying to make him understand that his money is best used for other things, like supporting the shelter in DC.”

“As much attention as Cattle Valley has received since that damn article came out, I’d think we could push for corporate sponsors or something.” Mario wasn’t a businessman, but even he knew the arena would cost millions. There was only one person in town with that kind of money, and if Asa Montgomery hadn’t offered to open his wallet by now, it wasn’t going to happen.

Mario grabbed the rag from his shoulder and tossed it into the laundry bin. Thinking about Asa in any way had the ability to both depress and piss him off. “Guess I’ll run to Deb’s and get a bite to eat.”

“K,” Rio answered as he refilled his juice glass.

Mario was almost out the door when the phone rang. He stopped and turned around as Rio answered.

Mario shook his head. “Tell him I’m out to lunch.”

Without waiting, Mario left The Gym and climbed into his beat-up pickup. He turned the key and prayed the damn thing would start. He knew it was time to trade the old girl in, but he’d been with Lola for going on thirteen years and he couldn’t bear to part with her.

After several attempts, Lola roared to life with a spew of black smoke. He chuckled and shook his head. It was a wonder the environmental activists weren’t camped out on his front lawn.

He pulled onto the road and headed for the diner. For over two weeks he’d been avoiding Asa’s calls. The first time he’d picked up his home phone and saw the man’s name on his caller ID, he’d almost jumped out of his skin.

Admittedly, he was excited at first, but that feeling soon turned into anger. For two days following the grandstand’s collapse, he’d waited at the hospital hoping Asa would call for him. Every time he inquired about seeing his friend, he was informed by one of Asa’s minions that he didn’t want any visitors.

The hurt and anger over the dismissal had Mario letting the call go to his answering machine. Afterward, he’d listened to the message and promptly deleted it. What the hell was wrong with that man? First he’d refused to see him at the hospital, and then he had the nerve to offer Mario a fucking salary to help in his rehabilitation. With all his money, Mario knew Asa could afford a full-time, live-in therapist if he wanted.

What hurt the most was Mario knew he’d have helped Asa for free if he’d just asked instead of treating him like a pest those few days following the tragedy. Now the man couldn’t pay him enough for forgiveness.

His cell phone started ringing as he parked in front of the diner. He grabbed it off the seat and looked at the display.

“I don’t know what’s going on between you and Asa, but he told me to tell you he’d double it. What the hell’s that about?”

“Fucker.” Mario took a deep breath. “I’ll go over and give him my answer in person.”

“Don’t say anything you’ll regret. I know he hurt you, but he’s had a rough time of it,” Rio reasoned.

“Later.” Mario hung up and headed towards Asa’s monstrosity of a house.

How dare that sonofabitch try to sway his decision with more money. Mario pounded his fist against the steering wheel. The way he felt, Asa would be lucky if all Mario gave him was a good tongue lashing because what he really wanted, was to punch the jerk in the face.

He pulled up to the fancy-assed security gate and pushed the call button.

Mario tugged on the small patch of hair under his lower lip, something he often did when he felt stressed. Several seconds later, the black iron gates swung inward.

Pretentious bastard. Mario drove down the long winding drive and pulled under the extended portico that hung over the driveway of the log and stone home. Mario jumped out and climbed the steps.

Before he even had a chance to knock, the door opened and an elderly woman beckoned him inside.

Carol has done it again! This one was good as the first one. Cattle Valley is the most wonderful place to live and the people make you feel love. Mario and Asa are just two of many that you will not...

Ms. Lynne continues her incredible series incorporating earlier characters while bringing the lives and relationships of these men alive...for one can't wait for the next installment of the Cattle Valley...

Share what you thought about Arm Candy and earn reward points.