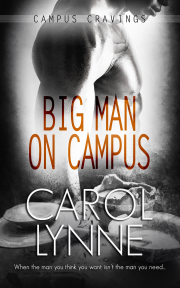 Book 20 in the Campus Cravings series

After his high school sweetheart breaks up with him, Benny Allenbrand arrives at college intent on winning back Chase. Unfortunately, Chase isn’t speaking to him, forcing Benny to seek comfort elsewhere.

Jamie Whitmore is the son of a conservative senator from Connecticut, and on his own after coming out to his father. His life is messy enough without falling in lust with a six-foot-seven football player who happens to be in love with another man.

What starts out as a purely physical relationship between Benny and Jamie soon has both men embroiled in political controversy. Will the media coverage tear them apart or bring them together?

Benny Allenbrand studied himself in the weight room mirror as he wiped the sweat from his face, neck and chest. At six-foot-seven, he’d always been big for his age, but playing college football would require more strength and agility than he’d needed on the team. He’d taken a part-time job at The Gym, a local workout center, to help pay off a debt to his father. The fact that he could use the equipment before and after his shift was a bonus.

“Lookin’ good.” Rio Adega, The Gym’s owner, began to unload the barbell Benny had used. “I have a feeling Coach Tucker’s going to be impressed.”

Nate ‘Bear’ Tucker was the offensive coach at North-Central Idaho University, and Benny’s favorite player. Bear had been the shit when he’d played offensive lineman for the Bighorns, and Benny couldn’t wait to make his coach proud.

“Thanks,” Benny replied as he started toward one of the treadmills. “Bear will probably be surprised that I’ve grown another two inches since he first watched me play.”

“You know it.” Rio nodded his head toward the window. “I’m heading to the park to run. Why don’t you come with me? You need to get used to the heat before practice starts, and I need to get outta here for a while.”

Benny eyed his boss suspiciously. “You enjoy running by yourself. Why all of a sudden do you want my company?”

’s expression turned guilty. “Just thought you could use an ear. We all know it’s not going to be easy for you and Chase to play on the same team. Figured you might want to talk to someone other than your dad about it.”

Benny shook his head. “I haven’t talked to Dad.”

“What? I thought the two of you were tight.” headed for the door. “Be back in an hour,” he told Kit, The Gym’s manager.

“Wait right there.” From her position behind the juice counter, Kit reached into the cooler. “It’s hotter than Hades today.” She removed two bottles of water before holding them out. “I need Benny to sanitize the mats later, so take it easy on him.”

winked and took the water. “He’s eighteen. If he can’t keep up with a man of my age, he doesn’t deserve to call himself an athlete.”

Kit crossed her arms over her ample chest and cocked her hip to the side but said nothing.

After several moments, sighed. “Fine. I’ll take it easy on the boy.”

Benny snorted. He loved working at The Gym. Kit had been the first transgender person he’d ever met, but he’d soon forgotten the gorgeous woman had ever been anything but the lady she was.

“Be back with energy to spare,” Benny told Kit.

“I’m counting on it!” she hollered as Benny and Rio walked out of the door.

As soon as they were outside, Benny started to stretch, but shook his head. “Let’s walk while you answer my question.”

Benny groaned. “I don’t want to talk about Chase.”

It was bad enough that the entire town knew he’d lost his shit when Chase, his high school boyfriend, had broken up with him a few months before. The last thing he needed was to dissect his mistakes with his boss—one of the biggest badasses he’d ever known.

“Too bad,” said. “Because all the strength training in the world isn’t going to help you on that field if your mind isn’t in the game.”

Benny walked several blocks without giving in to ’s demands. What good would talking about Chase do? Chase had moved on to someone else even before he’d had the guts to break up with him.

“I could tell you there’s someone else out there for you, but I doubt that would make you feel better,” said, breaking the silence.

Benny shook his head in agreement. He didn’t dare confess that he’d spent the summer plotting revenge against the man who’d come between him and Chase or that, in his gut, he knew he was meant to be with Chase again. Instead of dreading the upcoming school year, he was looking forward to it because he knew he could prove to Chase how right they were together. He’d given the situation a lot of thought and it was obvious Chase had been lured away from him out of loneliness. It couldn’t have been easy for Chase to move to a full of strangers. Chase had probably been vulnerable when Mac Evans had swooped in to steal him away.

“You don’t need to worry about that.” Benny took a sip of water. “That thing between Chase and his new man won’t last. You’ll see. Once I’m on campus, Chase’ll come back to me.”

“Seriously. Don’t worry.” Benny glanced over his shoulder at . “Come on, I’ve got to get this done so I can get back to work.”

I liked this story. It brings back some characters from Cattle Valley. It is cool seeing the kid’s from there growing up into men and dealing with new problems. I really liked Jamie and felt...

I haven’t read a Carol Lynne book in years but reading this story was like catching up with friends you haven’t seen in years. One of those feel good books that when I finish it, I want to...

Share what you thought about Big Man on Campus and earn reward points.