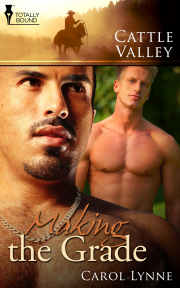 Book 19 in the Cattle Valley series

Kenny Trenton has had a crush on Cattle Valley English teacher, Eli Sanchez, since the age of seventeen. Although Kenny's no longer a schoolboy, Eli refuses to see his fellow faculty member as anything but a student.

Eli has spent his life hiding from the outside world. When the loneliness gets too much, he decides to make the changes necessary to open himself up to friendships and perhaps a relationship.

When Eli attends a high school football game in a neighbouring community, he's attacked in the parking lot. Although Kenny's the one to rescue him, Eli begins to think he's made a mistake and living in the outside world isn't a good idea.

Kenny's determined to keep Eli from retreating into his shell once again, but will his love be enough?

Eli Sanchez smoothed the wrinkles from his morning newspaper and took a sip of coffee. He still didn’t understand why the paperboy insisted on smashing the papers down after he rolled them. How many times had Eli discussed the matter with him? He shook his head. Once again he was letting his idiosyncrasies get the better of him.

Sure he was a man who liked everything done just so, but that was his early military training kicking in. Allowing the training he’d hated to ruin his mood over stupid creases in his newspaper was just plain ridiculous.

Shoving the paper aside, Eli took a bite of the bagel with low fat cream cheese he’d prepared earlier and thought about the day ahead. Recently, Eli had found himself having to think about the upcoming weekend in order to get through each day in the classroom. It wasn’t that he had anything to do on the weekend, hell, he usually sat home grading papers, but at least he didn’t have to share space with Kenny Trenton.

With any luck, the school’s reconstruction would finally be complete by the end of the year and he’d be back in his old classroom after the Christmas break. Eli sighed. The day couldn’t come soon enough. If he had to yell at Kenny one more time for hovering over him like he was some old man who needed looked after, he’d scream.

Sure he was seventeen years older than the handsome sonofabitch, but he sure as hell wasn’t an old man. Eli stood and carried his coffee cup and half-eaten bagel to the trash. After scrubbing his dishes clean and placing them into the dishwasher, he retrieved his insulated mug from the cupboard and poured the remainder of the coffee into it. Perfect. He always managed to make just the right amount of coffee. No sense wasting it and he didn’t care for reheated coffee.

Before leaving the kitchen, Eli ran a fresh dishcloth over the countertops and table before rinsing the cloth and hanging it to dry in the laundry room. After a quick glance around, he turned out the light and grabbed his travel mug.

Perhaps he’d get lucky and Kenny would be busy watching football films in his office in preparation for the big game on Friday night. Mentally crossing his fingers, Eli shouldered his well-worn messenger bag and headed out the door.

Kenny opened his eyes and glanced at the clock. “Shit.”

Throwing back the covers, Kenny jumped out of bed and headed to the bathroom. “I must’ve hit the off button instead of the snooze. Throw me a pair of underwear and some sweats out that drawer, will ya?”

Kenny assessed his appearance in the mirror. Other than a slight case of bedhead his hair looked clean enough. He loaded his toothbrush and stuck it in his mouth before grabbing for the deodorant. Going without a shower was one thing, but he doubted Eli would appreciate him stinking up the health room.

Luke appeared in the doorway with a crooked grin on his face. He tossed Kenny’s clean clothes to the counter before holding up the pair of black mesh underwear he’d been saving for a special occasion.

Kenny spat the toothpaste into the sink and turned on the faucet. “I asked you to grab a pair of underwear not paw through my stuff. I happen to know for a fact those were in the back of the drawer underneath everything else.”

Shaking his head, Luke laughed. “Sorry. They just surprised me is all. You get those for Eli?”

“Fuck off,” Kenny said, reaching for his clothes. He started to pull down his underwear but stopped and stared at his long-time friend. “You mind?”

“Get out. Go make yourself useful and grab me a bottle of orange juice and a couple of pieces of toast.”

With a roll of his eyes, Luke turned and headed out of the room. “A please would be nice.”

“Please?” Kenny asked with a growl in his voice. He loved Luke like a brother, but it was too damn early in the morning to deal with a smartass. After adjusting himself to ride comfortably inside his briefs, Kenny pulled on his sweats and reached for his cordless electric razor.

Ms. Lynne has continued her incredible series with this action packed addition...Thanks go to Ms. Lynne for a powerful story.

This is one visit to Cattle Valley that you will not want to miss!...I know I will be reading this book over and over again and very highly recommend it to everyone.

Share what you thought about Making the Grade and earn reward points.