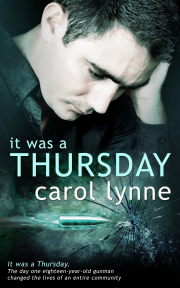 It was a Thursday

It was a Thursday. The day one eighteen-year-old gunman would change the lives of an entire town.

Principal Mark Kurtz loved his school. He worked hard to give his students every advantage in life, but he could have never predicted that on a warm day in May, a distraught senior would commit an unimaginable act of vengeance on his classmates.

In the aftermath of the shooting that left both students and faculty members dead, Mark must deal with his own guilt while trying to help those around him feel safe once again.

Mark’s problems are compounded when an old flame, Lane Warner, arrives in town to help treat the trauma victims. How can he possibly deal with his own guilt, be there for his seventeen-year-old son and confront the part of himself he’s always denied while trying to heal a broken community?

Mark Kurtz paused in the process of scrubbing his hands to throw back another swallow of the dark amber liquid that had been his constant companion since the shooting. He didn’t take notice of the raw skin under the nail brush or the sound of the ringing phone because once again he was lost to the memories.

A loud crack pierced Mark’s ears as he sat in his office, checking the weather report. The blood froze in his veins when he realized what he’d just heard. “Fuck.” He jumped up and rushed around his desk. A second shot rang out as he threw open his door. “Code Red,” he yelled as he ran through the administration office.

Juvenile screams nearly drowned out the third and fourth rounds as he hit the hallway and tried to assess the direction from which they’d been fired. Gym? He did his best to push down thoughts of his own son as he raced toward the gathered class of 2015 while the loudspeaker overhead ordered students and teachers to follow lockdown procedures. The school board had fought him when he’d insisted on implementing the Code Red drills after several shootings across the country had put students and teachers at the mercy of a madman with a gun, but he hadn’t backed down until they’d given in to parental pressure.

By the time he neared the first set of double doors that led to the gymnasium, all hell was breaking loose. He fought to stay on his feet as the panicked students pushed and trampled their own classmates in search of safety. Mark did his best to hold his ground as he fought his way into the gym. He had no real idea of what he’d do once he made it inside, but a bullet in him meant one less in a student.

While squeezing his bigger body between the crush of students and the metal door frame, one of the lock plates scraped against the side of his face, but suddenly, he was inside. The coppery scent of blood mixed with the pungent smell of gunpowder filled his nostrils. It only took a moment to spot the gunman.

Mark skidded to a stop. “Scott!” he shouted over the echoing screams. He couldn’t believe the devastation had come from the confident, fun-loving senior in front of him. No. Scott didn’t fit the profile.

Scott Brown, better known as Skittles, lowered the gun slightly before turning to face Mark. He blinked several times, as if coming out of a trance. “Principal Kurtz?”

Holding his hands up and out to his sides, Mark took three steps forward. “Put the gun down, Scott.”

Scott quickly scanned the gym’s interior. “You know I can’t do that. Just look at what I’ve done.”

“It’ll be okay,” Mark tried to reason. “We’ll get you help.” He heard several students moan but didn’t take his eyes off the boy with the gun.

“I’ve had to fight every day to be true to who I really am, knowing it would be easier if I were someone else. I’m tired of fighting,” Scott’s voice quavered as he raised his arm again.

Mark braced himself as he watched the gun swing upward. Not me, not me, he silently prayed. “Is that what this’s about? Is someone bullying you?”

“Yes, sir.” Scott’s eyes swept the carnage he’d wrought before returning his gaze to Mark. His facial expression seemed to change from sorrow and guilt to pure hatred. “They thought because they weren’t on school property they’d get away with taking my self-respect. I had to show them they were wrong.”

Before Mark could react, Scott pressed the gun to his own temple and fired.

“I’ve been calling you for an hour!” Max yelled after opening the back door. “You scared the shit out of me.”

Mark jumped at the sound of his son’s voice. He methodically put the scrub brush back into the soap dish before turning off the hot water. “Sorry. Reporters are still calling for an exclusive, so I’ve just stopped answering the phone.”

Max grabbed a dishtowel off the counter before moving to Mark’s side. He gently wrapped Mark’s bleeding hands in the towel. “You have to stop this.” He eyed the half-empty bottle of Johnnie Walker beside the sink. “I’m worried about you, Dad.”

Max lifted Mark’s wrapped hands. “This is not you being fine. Do you want me to call Dr. Long?”

Mark shook his head. He’d spoken to the psychiatrist three times a week for nearly two months, and it hadn’t done a damn bit of good. “I’m just nervous about tomorrow. That’s all.”

“I have to go back to work to get ready for the new school year. It’s the reason the press is still interested.” Mark tried to muster a smile for his son. “You’ll be a big senior this year. Nervous?”

“Sure, but it has nothing to do with being a senior and we both know it.” Max released his hold on Mark before opening the refrigerator. “We’re all scared, Dad. It’s going to be as hard on us as it is on you, but you don’t see me getting drunk in the middle of the day or scrubbing the skin off my hands.”

Mark bit the inside of his cheek to keep from saying what he really wanted to say. He should have been grateful Max hadn’t been anywhere near the gym when Scott had opened fire. He should’ve been over the moon that his only son hadn’t been forced to choose which of the students to help before the paramedics could arrive. Nope, only he had stared into the eyes of a dying Mitch Crawford while trying to stem the bleeding from Julie Rosedale’s chest wound.

“You’re right,” Mark finally agreed. “I’ve got two weeks to face my demons before you kids come back. Don’t worry. I’ll have my head straight by then.”

I think Carol Lynne nailed this story perfectly. This book hit me hard, though it is very well written I still felt every word the author wrote. This is very powerful, hard hitting yet it still...

This was a very powerful book. It deals with the aftermath of a school shooting. Before I go any further, you need to understand I live five minutes from Sandy Hook School in Connecticut. I was a bit...

Share what you thought about It was a Thursday and earn reward points.

Carole Lynne - Because Two Men are Better Than One feature

My newest release, It Was a Thursday, deals with the aftermath of a school shooting. I’ve been sitting on this story idea for about five years. Four years ago, I decided to write the story that continued to sneak its way into my dreams.