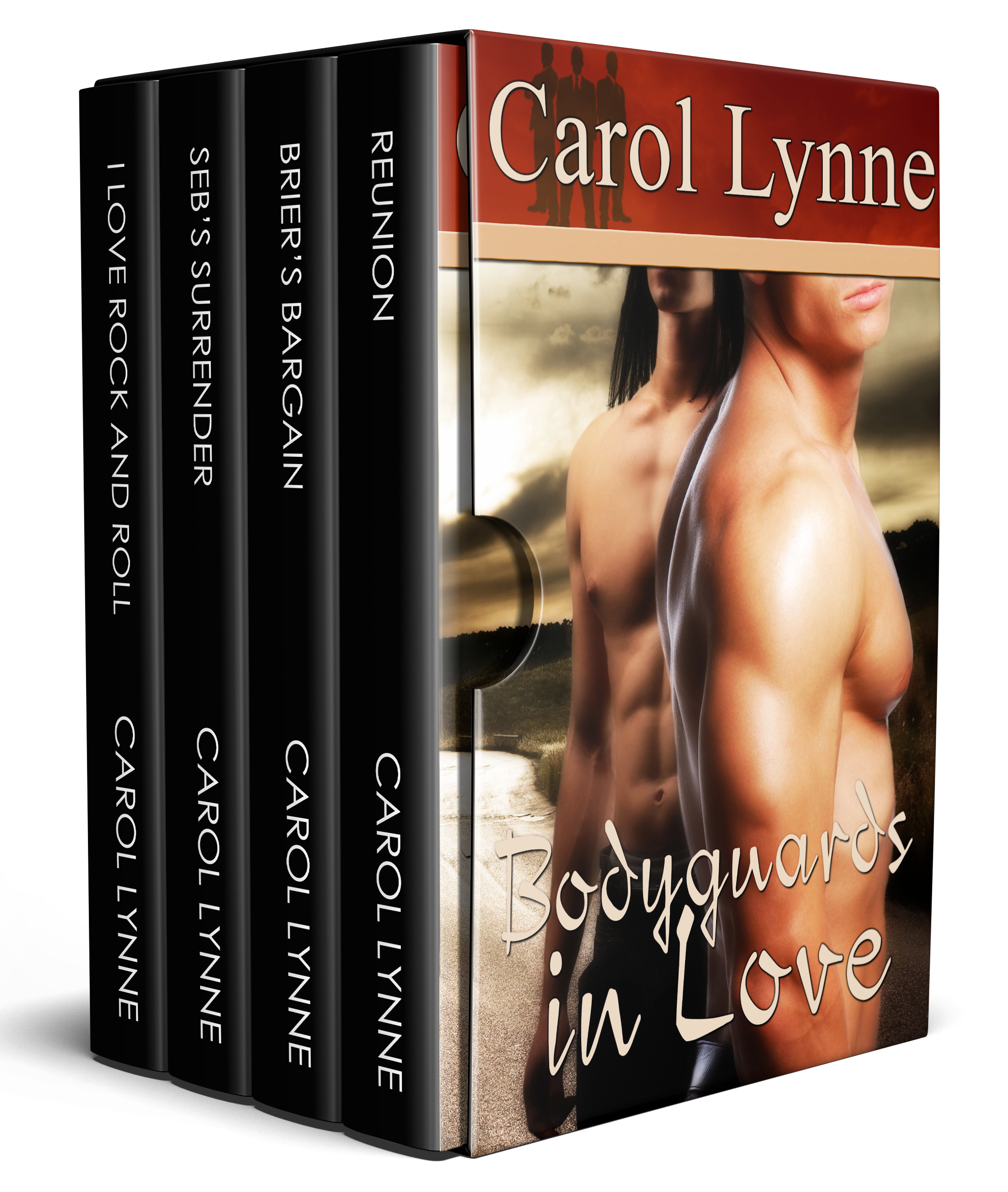 Bodyguards in Love: Part One: A Box Set

Your favourite families from the Men in Love series are back.

For over ten years, Gabe Whitlock's ex-SEAL buddies have searched for the woman who abandoned him as a small child. When Jake Sommers receives a phone call from a woman claiming to be Gabe's long-lost sister, he calls the team together once more.

As the past unfolds, and mysteries are uncovered, the gang converges on the Triple Spur to rally around their friend.

Rock star Keifer Zane's homosexuality was leaked to the tabloids by 'inside sources'. With the news of his sexual preference came threats and love-sick stalkers. In need of a bodyguard, Keifer's manager hires Archer Adams, a man that is anything but a rock fan.

Pacing back and forth in his small office, Jake Sommers picked up the phone and called Cree, one of his partners.

“I’m not sure, but I want to tell you and the rest of the family when we’re all together.” Jake looked through the one-way glass at Remy, his other partner in the five-some. He knew his partner’s class was almost over and hopefully the women wouldn’t mind having the rest of the afternoon off.

“I’ll be there in thirty minutes. Can you at least give me a hint?”

Jake grinned. Cree hated secrets, always had. “It’s about Gabe and the mother we’ve been trying to find for the past eleven years.”

Rolling his eyes, Jake zeroed in on Remy’s ass. Even after all these years, he still got a hard-on every time he gazed at those sweet cheeks. “You’re not getting any more information until you get here.”

Cree must’ve heard something in Jake’s voice, because his next words were right on target. “You’re staring at Remy again, aren’t you?”

“I take it he has on those light blue shorts?”

“Damn. Don’t let him change clothes before I get there.”

“What if he just takes them off?”

“You’ve got twenty-five minutes. Do your best.”

“Call Cory and Jenny for me, would ya?” He loved the women he shared with Cree and Remy, but neither of them knew how to get off a phone under twenty minutes and he something a little more important to do than chat.

“Yep.” Jake rubbed his lengthening cock through the outside of his jeans. Remy was instructing the women to take a break and get a drink. “Gotta go. I’ll meet you at the house.”

After disconnecting, Jake pushed the intercom button. “Remy? Can I see you in my office?”

He watched as Remy turned and nodded before speaking to the women sitting on the thick workout mats. Their business, Fighting Back, had grown by leaps and bounds over the last ten years.

Women were coming from all over the country to learn how to defend themselves and regain their self confidence.

By the time Remy walked into the office, Jake had his fly open and his cock in hand. Remy’s eyes went wide as he let out a whistle. “Is that for me?”

“You and those damn shorts. I need you to cancel your next class, or have one of the other guys take it.”

Walking towards Jake, Remy didn’t stop until they were cock to cock. “You think it’s gonna take that long?”

“Hell, no. But we have to go up to the house afterwards for a meeting.”

“Mmm hmm,” Jake moaned, as Remy stroked him. He struggled to push down the tight spandex fabric of those pretty blue shorts. “Need you.”

“Got me,” Remy said, licking a path up Jake’s neck.

The wet trail ended at Jake’s mouth, Remy’s tongue pushing in deep and hard. After successfully exposing Remy’s cock, Jake wrapped his arms around his love and ground against him.

Increasing his pace, Jake bit the tender skin of Remy’s exposed neck. It was always like this with Remy. Rarely did they take the time to fully undress, except at night. Most often their passion got the better of them in the office. In the old days, before the facility was built, the barn had been the place for their afternoon rub-offs.

“Uh huh,” Jake agreed. His cock felt like it would catch fire at the pace they’d set. “Now,” he panted, seconds before his cock erupted, shooting thick streams of warmth between them.

“Jake!” Remy shouted as he came.

Pulling Remy with him, Jake led them over to lean against the desk. “So good.”

Remy licked and nipped at Jake’s jaw before delving in for another tongue tangling kiss. “Always has been.”

Share what you thought about Bodyguards in Love: Part One: A Box Set and earn reward points.