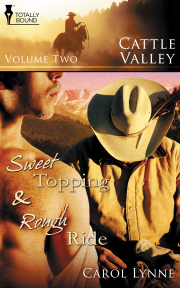 Book 35 in the Cattle Valley series

Two of Cattle Valley's largest residents are about to fall, and fall hard.

Wheelchair-bound, Kyle Brynn loves his home above the bakery he owns and runs.

Darshawn 'Gill' Gilling quit professional football at the height of his career without a word to the press as to why. Now settled in Cattle Valley, Gill's happy running his garage and gas station. Most folks in town tend to be a little awestruck when Gill comes around, but if he wanted fans he'd have stayed in football. What he really wants is that cute little baker down the street.

For rancher Ezra James, life is pretty simple. He wakes before dawn and spends his day working with the cattle he loves. For twenty years, the EZ Does It ranch has been enough to drown out his loneliness.

Palmer Wynfield caught Ezra's eye the first time the rancher stepped foot in the store. Though Ezra knew his large size intimidated others, his little self-confidence was shattered when Palmer backed away in apparent fear.

An early morning phone call changes his life. Though the line is scratchy, Ezra definitely hears the words he's been waiting to hear from Wyn for years. "I need you."

5 out of 5! For all you Carol Lynne fans, The Cattle Valley series has another amazing installment. Sweet Topping is a real page turner you'll find hard to put down... I was completely taken in...

5 out of 5! Ms. Lynne has continued her creative and inspiring series Cattle Valley. Thanks go to Ms. Lynne for another wonderful book.

Share what you thought about Cattle Valley: Vol 2 PRINT and earn reward points.