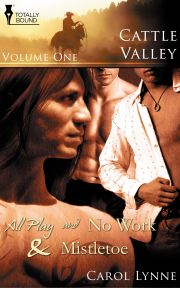 Book 34 in the Cattle Valley series

You first got to know them in the Good-time Boys series, now follow Nate, Rio and Ryan to their new home in Cattle Valley.

Nate, Rio and Ryan fit right in. But, with Ryan busy in his new job as town Sheriff, Rio and Nate are left to wonder how they're supposed to make a living. What use are a highly trained mercenary and a private detective in a peaceful community the size of Cattle Valley?

Cattle Valley Mistletoe: The Reverend Casey Sharp loves his church, his congregation and his community.

Contractor Halden Kuckleman, loves his quiet life. After a childhood trauma, Hal gave up on love and God. He's fine working on the renovation as long as Reverend Sharp doesn't try to save him.

When Casey offers to lend a hand however, he begins to wonder if the willowy minister will help or lead him straight into temptation.

Nate and Rio had been hired to investigate a scumbag in Sommerville who’d shot a good friend’s partner. If you booted out the few assholes in that town, it would have been kick ass fun. But Cattle Valley...

At least from what he and Rio had been told, there were more gays that lived there than straight people. What would that be like? The town had been founded by a man whose son was murdered for being gay. Having no other heirs, the man had donated one of the biggest parcels of privately owned land in Wyoming. His entire financial portfolio had founded the town of Cattle Valley. Seemed the guy wanted a place where gay people could live without fear or prejudice. It was all fine and dandy with Nate as long as the town had a decent coffee shop and a good restaurant.

Rio started humming along to the radio, bringing Nate’s attention back to that fine face. As he studied Rio’s profile, he thought back to the night Rio and Ryan had saved him in a club in Lincoln. He’d gone with his friends Rawley and Jeb to the upscale gay club. Nate remembered trying his best to get over his attraction for Rio and Ryan that night. They were already a long standing couple, and it didn’t appear they had a need for a third.

Since Nate had planned to make a weekend out of the trip to Lincoln, he’d rented a hotel room right down the street from the bar. When Rawley and Jeb said they wanted to take off, Nate happily waved them on their way. That was when the real fun began...

“Um, yes, hi, I’d like to speak with Halden Kuckleman.”

“Hi, Mr. Kuckleman, this is Reverend Casey Sharp from the Cattle Valley Community Church. I was wondering if you would be willing to come out and give me a bid on completing the church expansion.” Casey adjusted his reading glasses, a nervous habit of his from grade school. He was starting to worry he’d never find anyone to finish the reception hall and at this late date, he was desperate enough to call on Halden Kuckleman.

“Yes, well, I heard that, but I’m kinda desperate. The contractor we hired to do the work, quit in the middle of the project, and we’ve promised to have the building ready for the annual Christmas Eve party. I know you’re not a religious man, Mr. Kuckleman, and if you’d be willing to come take a look at the building, I promise not to try and save you.” Casey bit his lip. Shoot, maybe he shouldn’t have said that. Even though it was common knowledge around town that Halden was a tried and true atheist, maybe Casey should have just kept his mouth shut. He was the new guy in town, and making enemies wasn’t his idea of fitting in.

There was a loud sigh on the other end of the phone. “How much still needs doing?”

“Well, the basic shell is there, but nothing has been done on the inside. I’m sorry to say, there isn’t any heat yet, but at least you’ll be out of the snow and wind.” Casey looked out his office window at the snow on the ground. It was only mid-November and already, the city had been blanketed with almost two feet of snow. He sure as heck wouldn’t want to work in an unheated building, but then, if a person was used to working outside in weather like this...

“The heating issue won’t bother me, just the location.” Casey didn’t say a word. Halden seemed to be considering it, and at least he hadn’t hung up on him.

After a few seconds, Halden continued. “Will you be around this afternoon?”

Casey pumped his arm in the air in triumph. “Yes, I’ll be here all day.”

“I could probably swing by after lunch and take a look, no promises, though.”

“Yes, of course. My house is next door, which is probably where I’ll be. If you could just honk when you pull into the parking lot, I’ll be right out.” Casey closed the phonebook, and put it back on the shelf.

“See ya then,” Halden said and hung up.

Casey put the phone back into its cradle and looked around his office. He still had boxes to sort through, and a sermon to practice for Sunday. Scratching his head, he got up and wandered into the kitchen. Maybe a cup of strong coffee would get him going.

The house still didn’t quite feel like home, but what did he expect? He’d only been in Cattle Valley for two weeks, two very lonely weeks. Despite his chosen vocation, Casey was a man who enjoyed sex, lots of sex. It was the only reason he’d chosen to go to college to get his Master’s degree in religious studies instead of entering a seminary.

Now with his dream job finally in place, his social life seemed to be paying the price. It wasn’t that folks in town weren’t friendly. They just tended to keep Casey at arms length. He knew it was further fall-out from his predecessor, Reverend Brian Doles, but Casey needed them to understand he wasn’t like that man. He’d never even considered beating up lover. Maybe the town just needed a chance to heal.

Pouring a cup of java, Casey idly walked through the living room to his bedroom. Although the front room and kitchen had been unpacked, most of his personal belongings still lined the walls in boxes. Casey just didn’t have the heart to dig through memories yet. Leaving his family and moving to Wyoming had been a big step for him. His mom still didn’t understand why he’d n

Was sad to say goodbye to the Good-time Boys series, but Carol gave us a great spin off! Picking up with Nate, Rio and Ryan, we're visiting Carol's latest world, Cattle Valley. Look forward to...

Especially as the first in a series, I found this book enthralling. I was already intrigued by Nate, Ryan, and Rio from the Good Boys books, but this one developed them into complex people and made...

Share what you thought about Cattle Valley: Vol 1 PRINT and earn reward points.