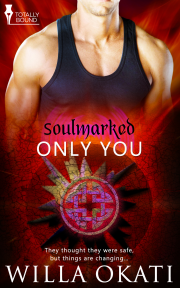 Book 2 in the Soulmarked series

“What? Oh. Left here. Sorry.” Nick shook his head, trying to clear the tangle of cobwebs from his thoughts. He’d had a head like a rainy winter morning for hours now. Not a usual thing for him, and he couldn’t say he cared too much for it. “I’m so used to this route I forget it isn’t second nature for everyone else.”

“To say the least.” Abram’s amusement at Nick’s expense, indulgent at worst, didn’t chafe. Abram probably got away with more than anyone rightfully should by virtue of being a friendly giant. He certainly managed to poke his nose into almost everywhere it didn’t belong without worrying he’d get called out for it. “How long has it been since you and Barrett moved out here?”

“Coming up on almost a year, I think?”

“I think, he says.” Abram clicked his tongue in mock disapproval. “As if he doesn’t know by heart.”

Nick laughed. “Beats the old apartment, though, doesn’t it?” He watched Abram squint through the windshield at the gradual change from low-slung ranch-style homes to old-school farmhouses, both those growing older gracefully and those that most definitely weren’t. “Even with dial-up Internet.”

“God. Better you than me. Don’t think I could do it.” Abram tapped the steering wheel almost idly. “You’re a million miles away. Something on your mind?”

Nick shrugged with one shoulder. He rested his arm on the truck’s cab window and idly surveyed the ever more rural scenery gliding past. “Hell of a weekend, that’s all. Can you blame me?”

“That I cannot,” Abram said. He whistled soft and low and tugged his earlobe with its obsidian widower’s bead, as if for luck. “Never thought I’d live to see the day when Ivan and Robbie would mend their fences. Good for them, but there’s likely many a betting man who lost money in that pool.”

Right. The crux of the problem.

Nick frowned. “And there I was, not knowing there was a pool at all. Or a reason for a pool.”

“Is that what’s been eating you? It was Ivan’s business. If you hadn’t figured it out on your own, it wasn’t my story to tell.”

“Not exactly,” Nick said. He’d tried for hours to find the right way to put it, and he’d had no luck yet. “I haven’t known Ivan as long as you. And I’m glad as can be he’s patched things up with his soulmate, don’t get me wrong. It’s just…”

“Not the way life’s supposed to work?”

“Unexpected, I was going to say.”

“Six of one, half a dozen of the other,” Abram said with a philosophical shrug. “Save me from starry-eyed young’uns in love.”

“No blame, no shame.” Nick stretched out his legs. Abram had a roomier truck cab than most to accommodate the man’s long legs, but no one could ride for three hours straight without starting to dream about solid ground off-road. “Barrett’s going to murder me in cold blood when he finds out what he missed.”

“Not likely. Cut one of you, and the other bleeds.” Abram cocked his head. “Why was he not along this weekend, again?”

“Parent-teacher conferences. Couldn’t get out of them.” The rubber band on Nick’s braid broke with a muted pop and snap as it bounced off the window. “Damn it! Knew that was going to happen,” he said through a tangle of hair. Thicker, curlier and heavier than a new fleece, it took more than elastic to restrain the mess. He’d have cut it, but anything longer than a buzz left him looking like a startled dandelion. “You didn’t get snapped, did you?”

Abram patted his shaved head with a dash of admittedly deserved smugness. “I’ll live. Thought you had a leather tie thing?”

“So many questions,” Nick chided, not seriously. He didn’t mind letting the man have his fun. Most of the time. “Lost it somewhere. Probably in the stands.”

“Lost your hair tie and your wrist cuff and your illusions. Not one of your best weekends on record.”

The amusement ebbed out of Nick. He resisted—just—the urge to clamp his hand over his too-long, all-encompassing left sleeve and chafe the wrist beneath. Abram wouldn’t have taken it amiss. Soulmarks were private and kept protected.

I love the fated mate trope, and I really love the twist that Okati has given it.  This is another great installment in the Soulmarked series. While I think that technically it can stand alone,...

Share what you thought about Only You and earn reward points.

Three of my favorite TV couples:

• Dean and Castiel, Supernatural. How you define their relationship may be up to interpretation, but there's a powerful connection between hunter and wayward angel. They'd fight for one another. They have gone to hell and back for one another. No greater love has any man, right?